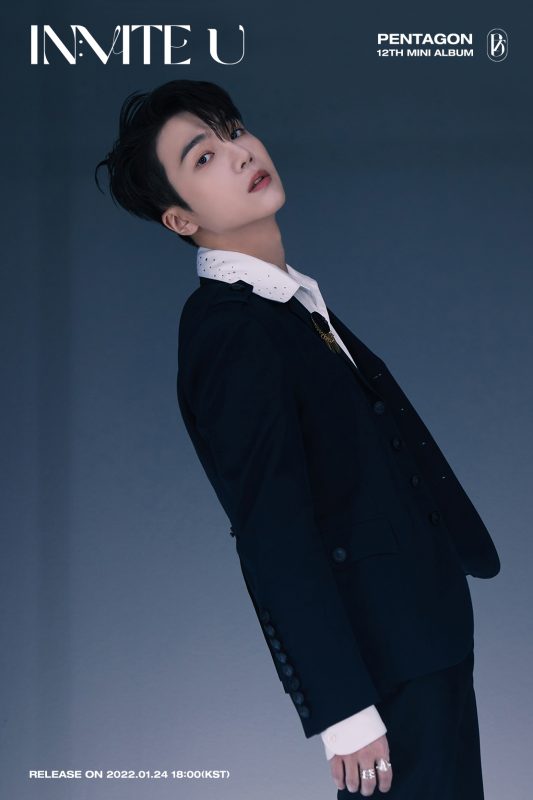 Jinho (진호) is a member of the South Korean boy group Pentagon.

Jinho Facts:
– Jinho’s hometown is Seoul, South Korea
– He has two younger sisters.
– He can play several instruments including the piano and guitar.
– His position in Pentagon is Main Vocalist.
– He lived in Qingdao, China for one year when he was 15, so he can speak Chinese.
– Jinho can also speak English quite fluently.
– He is a former SM Entertainment trainee.
-He is under Cube Entertainment.
– In 2010 he debuted in SM the Ballad, a boy group project under SM Entertainment.
– Jinho became an SM trainee by winning first place in the company’s ‘Everysing Contest’ in 2008.  Xiumin of EXO came in second place.
– Before EXO debuted, many fans theorized that Jinho would be a member.
– Jinho left SM Entertainment in 2015 and became a vocal coach at Modern K Academy.
– Soon after becoming a vocal coach he auditioned for Cube.
– He was accepted as a member of Pentagon after he completed his Pentagon Graph during the eight week of his audition period.
– The members know him as cutest tiny hyung.
– Jinho is the oldest and shortest member in Pentagon.
– Jinho appeared on MBC’s singing show “Rewriting The Chart Show, Number 1 Now Is?” with Hui, where they sang “All of My Heart” by Kim Kwang-Jin and “My Friend, My Place of Reprieve” by Kim Min-woo.
– In March of 2020 he appeared on Mnet’s music talk show “Radio Musical Hall 2” where he sang Brian McKnight’s “One Last Cry”, and “Someday” with Hui, which they also produced together.
– In 2018 he was featured in the song “Always” by Jung Il-hoon of BTOB.
– The members think that he is the most different on and off stage.
– Jinho has sung or been featured on OSTs for the K-dramas “What’s Wrong with Secretary Kim”, “On the Campus (So BE It)”, and “Welcome to Waikiki 2”.
– He has written and produced songs for Pentagon such as: “All Right”, “Can’t Forget”, “One More Night”, “Round 1”, “Round 2”, “SUMMER!”, “To Universe”, “Thinking About You”,”UP”, “Find Me”, and “Talk”.
– Jinho has his own segment on Pentagon’s Youtube channel called “Magazine Ho, where he posts a song cover at the end of every month.
– Jinho has held 3 solo mini-concerts “Magazine Ho Mini Live” (2018), “Magazine Ho Vol.2 – Ready Ho” (2018), and “Magazine Ho Vol.3 – Off Stage” (2020).
– Jinho has his driver’s license.
– His favorite song to preform is “Shine”.
– His favorite Pentagon song is “Like This” because of the lyric “I will keep running”.
– If he was a superhero he would want to be Luke Cage.
– He is a fan of Charlie Puth’s music.
– He likes the song “Symphony” by Clean Bandit.
– He once said that he grew 14 cm during his 6th grade winter break, however the members don’t believe him.
– He likes the show “Wednesday Food Talk”.
– He appeared on “King of The Masked Singer” as ‘Young Master’, but he was eliminated in the 2nd round.
– He trained for a total of 8 years before debuting in Pentagon.
– He enjoys wearing pink sweaters.
– He can imitate a crow.
– Jinho is very good at high notes, he can even do IU‘s triple high note in “Good Day” in the original key.
– Jinho further showed his vocal ability by singing “Tears” by So Chan-Whee and “She’s Gone” by Steelheart alongside fellow member Shinwon (Kiss The Radio).
– One of his special skills is mimicking brass sounds. (The Immigration)
– His ideal vacation is going on a cruise.
– If he could have a job for one day it would be a building owner.
– If he could have a super power, he would want to have the ability to control metal, like Magneto from X-Men.
– If he had to eat one meal for the rest of his life it would be Blood Sausage Rice Soup.
– When asked about items he cannot live without, Jinho said his headphones and Propolis (Spray to soothe the throat).
– Jinho gets scared very easily.
– He is very flexible and can do the splits.
– Jinho can do the dances to “Pick Me” from Produce 101 Season 1, “Like OOH-AAH” by Twice, “Me Gustas Tu” by Gfriend, “Bar Bar Bar” by Crayon Pop, and “Bubble Pop!” by HyunA.
– Jinho is very good at rapping, however doesn’t rap in Pentagon’s songs.
– Jinho participated in the musicals “Summer Snow” as Lee Suhyun, “All Shook Up” as Dean Hyde, “Iron Mask” as Raoul, and “The Goddess is Watching You” as Ryu Soon-Ho.
– Jinho made a cameo in the drama “Hello My Twenties! 2” with fellow members Shinwon, Kino, Yeo One, Yuto, and Wooseok, as the group Asgard.
-Jinho won the “Fatal Attraction Award” at CELUV’s 100th Special Awards.
– When he was asked who he would he trade bodies with, Jinho said Hongseok, because of his chocolate abs (Pentagon Plays Who’s Who).
– In the old Pentagon dorm, Jinho used to have his own room.
– For the updated dorm arrangement please check Pentagon profile.
– Jinho enlisted in the military as an active duty soldier on May 11, 2020. He will be discharged on November 14th, 2021.
– Jinho’s Ideal Type: Somebody girly. He also likes girls with nice nails.

How Much Do You Like Jinho?
Total Votes: 2151
×
You or your IP had already vote.