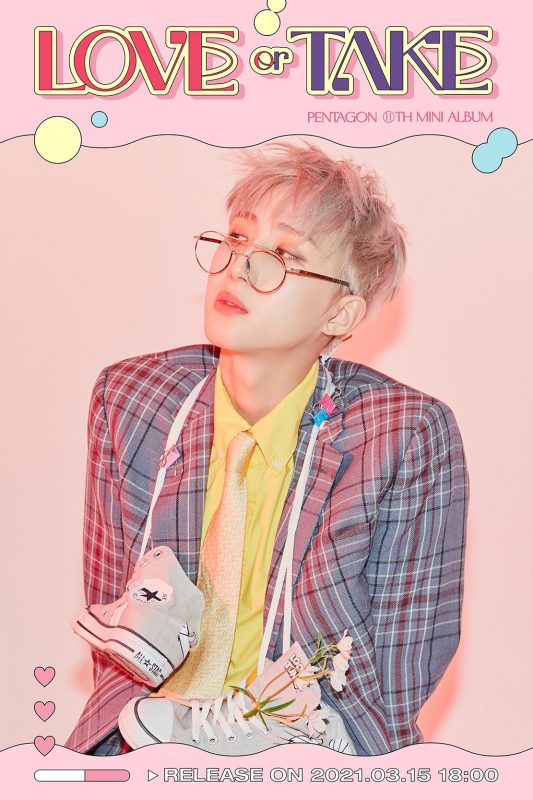 Hui (후이) is a member of the South Korean boy group Pentagon.

Hui Facts:
– Hui’s hometown is Gwacheon, South Korea.
– He has an older brother.
– He graduated from Modern K Academy.
– Hui applied to Hanyang University but was rejected. (vLive with Hyung Don)
– His mother used to teach English as a profession.
– Hui can play the piano.
– He has a dog named ‘Happy’.
– He was previously a trainee at JYP Entertainment.
-He is under Cube Entertainment.
– In 2010, at the JYPE 7th Audition Final Round, Hui won 1st Place Best Male Vocal.
-Hui is the Leader of Pentagon, and he also holds the positions of Main Vocalist and Lead Dancer.
– He can be seen in G.NA’s “Secret” MV and their promotional activities.
– He appeared in Rain’s MV for “Rain Effect”.
-Hui won second place on Mnet’s singer-songwriter competition show, “Breakers”.
– Hui was on ‘King of Masked Singer’ under the alias ‘Crane Guy’, he was eliminated in the 3rd round.
– Cube audition: Hui became an accepted member of Pentagon when he completed his Pentagon graph in the 9th week of the program.
– Hui discovered he could tumble after trying it and doing well. (Weekly Idol ep. 305)
– One of his favorite songs is “Company” by Justin Bieber.
– Hui does a lot of aegyo and acts like the maknae of the group.
– One item he cannot live without are his headphones.
– Hui preformed his self-produced song “Swim Good’ with Somin of KARD on “Breakers”.
– Hui tells not very funny dad jokes.
– He likes the TV show “Infinite Challenge.
– When asked what job he would want to try out for one day, Hui said being a jockey (horse rider).
– His ideal vacation would be free time, during which the members could just spend time together and talk.
– In a game of ‘Who’s Who’ Hui picked himself as the strongest member, because he has the most money.
– Hui is the worst at responding to text messages because he doesn’t often look at his phone, but he promised to get better at it.
– He can speak basic English.
– If he could have a super power it would be the ability to create anything, using ‘Goblin’s Hammer’.
– Hui has abs, he showed them off when Pentagon was promoting “Shine”.
– When Pentagon records there songs it can take up to 12 hours because of how detailed Hui is.
– If he had to eat one food for the rest of his life it would be snow crab.
– Hui once dressed as a girl for a skit with Wooseok during ‘Pentagon Maker’.
– Hui has problems eating foreign foods. (PENTAGON Philippines Promotion Behind)
– He thinks one of the most important qualities of a leader is charisma.
– Hui lived in China for a short period of time when he was a teenager.
– Hui competed on the show ‘Chinese Idol’ in 2013 when he was living in China.
– Hui is quite interested in fashion and has given out tips in some of Pentagon’s variety videos.
– If he was a girl, Hui would want to marry Hongseok because he has a nice body.
– Hui was a trainee for a total of 9 years.
– Hui, along with fellow member Yuto, was on the show ‘Flower Soccer’, where they played soccer games.
– His favorite song to perform live is “Like This”.
– Hui was part of the Cube sub unit Triple H with fellow member E’Dawn and labelmate HyunA.
– His position in Triple H was Main Vocalist.
– If he could be another member for a day he would want to be Yeo One because he has healthier hair. Pre-debut it had been Wooseok.
– Hui composed the song “Never” for Produce 101 & he wrote the lyrics with fellow members E’Dawn & Wooseok.
– Hui won a lot of awards after composing Wanna One‘s debut track “Energetic”, for which he also wrote the lyrics with Wooseok.
– Hui and Flow Blow composed one of the songs from Kriesha Chu‘s 1st mini album, ‘Like Paradise’.
– For girl group BVNDIT‘s song “Dramatic”, Hui helped to compose and write the lyrics.
– Hui is a very active composer and lyricist for Pentagon, having written many of their songs.
– Hui appeared on KBS’s upcoming variety show, ‘Hyenas on the Keyboard’.
– On August 2nd 2018, CUBE confirmed that Hui and (G)I-dle‘s Soojin were previously in a relationship, but have now broken up.
– Hui wrote the lyrics for the song “Boys”, which appeared on Produce x 101.
– In the old Pentagon dorm: Hui had his own room.
– For the updated dorm arrangement please check Pentagon profile.
– Hui enlistment date was supposed to be December 3, 2020 (as public service worker), but it got postponed due to self-quarantine.
– Update: Hui enlisted in the military on February 18, 2021.
– Hui’s Ideal Type: Someone who tries their hardest at everything they do.