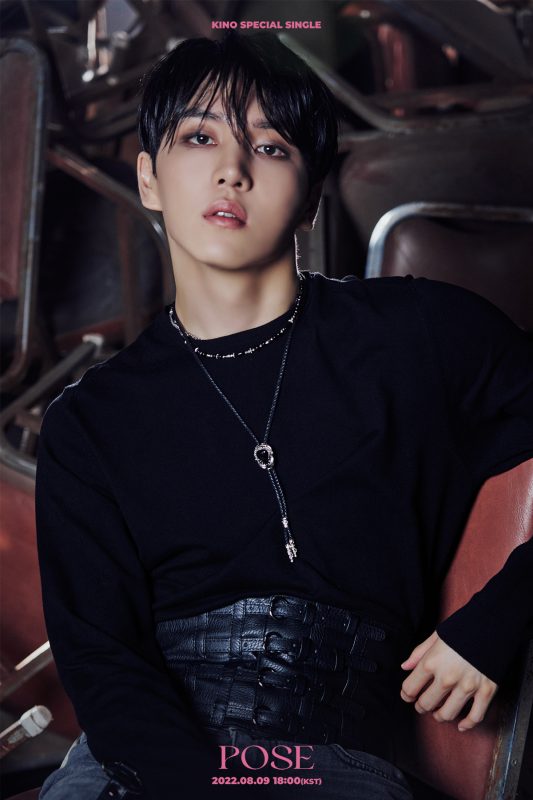 Kino (키노) is a member of the South Korean boy group Pentagon.

Kino Facts:
– Kino was born in Seongnam, South Korea.
– He has a younger sister, named Kang Minju.
– Kino can speak Korean, Japanese, and English.
– Education: Hanlim Multi Art High School and Sejong University where he majored in dance.
– He was admitted to art school as the #1 candidate.
– Even though Kino and Wooseok are the same age, Kino is one academic year older.
– He has composed a lot of his own songs, which he uploads to his Soundcloud.
– He shares a music production room with Jinho.
– He writes a lot of long, loving messages to his fans.
– The members like to make fun of Kino for being sensitive.
-On Road To Kingdom it was revealed that Kino is friends with Hyunjae of The Boyz.
– Kino had to halt promotions for “Sha La La” because he injured his leg.
– He has released 3 solo songs: “Lonely”, “Badtiming”, and “La Di Da”.
– Kino has helped in the production and writing of 13+ Pentagon songs including: “Violet”, “Spring Snow”, and “Happiness”
– He sang an OST called “Miss U” for the drama ‘One The Campus’ with Hui and Jinho.
– He used to be a trainee at Power Vocal.
– Kino can be seen in G.NA’s ‘Secret’ MV and her promotional activities.
– In hanja, his birth name (hyung-gu), means light and solve, but he has given it the meaning ‘to have faith in his hyungs’.
– Kino said that his Japanese name is ‘Kei’, which means light.
– He was also in Rain’s ‘Rain Effect’ MV.
– He did a dance cover to Chris Brown’s “No Guidance” on Studio Choom.
– Kino served as an MC at The Rainbow Concert.
-Kino is part of middletagon, which comprised of the Pentagon members in the middle of the height spectrum.  Hongseok and Yeo One are also members.
– His nickname is ‘Dancing Machine’.
– Kino became the first official member of Pentagon, as he was the first to complete his pentagraph on Pentagon Maker.
– He said he’s not afraid of anything, except being tickled.
– His hobbies include reading and playing billiards.
– One of his classmates from high school is ASTRO‘s Cha Eunwoo.
– He lived in the Philippines for 3 months.
– Kino was part of a dance team called “Urban Boyz”.
– He wants to be roommates with Wooseok.
– His friends include: GOT7’s Yugyeom, UNIQ’s Seungyoun, and Seventeen’s Vernon.
– Vernon bought Kino a phone case when visiting Japan.
– Kino’s position in Pentagon is Main Dancer, Sub Vocalist, Sub Rapper, and Face of the Group.
– He is part of Pentagon’s maknae line, along with Yuto and Wooseok.
– Kino claims he is the most different on and off stage. (ASC ep 234)
– He is good at imitating dance moves, and other kpop dances.
– Kino is also a good choreographer, helping to make the dance for “Gorilla” and “Like This”. (Arirang TV)
– E’Dawn says Kino does girl group dances the best. (ASC ep 234)
– He performed dances from girl groups such as: Red Velvet, Twice, AOA, and IOI.
– He can also dance to BTS‘s “Blood Sweat and Tears”and GOT7‘s “Hard Carry”.
– He likes the song “I’ll Be Alright” by Mura Masa.
– He likes to listen to music when he has free time.
– His ideal vacation is anywhere his whole family is gathered.
– If he could have a different job for a day, Kino would be a kindergarten teacher.
– If he could have any super power it would be teleportation.
– If he could only eat one meal for the rest of his life it would be gyukatsu.
– Kino is a member of the group M.O.L.A (Make Our Lives Awesome).  He debuted with the song “Chillin” with fellow members Jamie (formally of 15&) , UNIQ’s Seungyoun, and Nathan.
– Kino, alongside Shinwon, Jinho, Yeo One, Yuto, and Wooseok made cameos on the drama “Age of Youth 2”, as the fictional group Asgard.
– In a game of ‘Who’s Who’, Yuto said that Kino likes to accessorize.
– Shinwon and Kino used to share a room in the old Pentagon dorm.
– For the updated dorm arrangement please check Pentagon profile.
– He debuted as a soloist on August 8, 2022 with single “Pose“.
– Kino’s Ideal Type: Someone who has an upbeat personality.