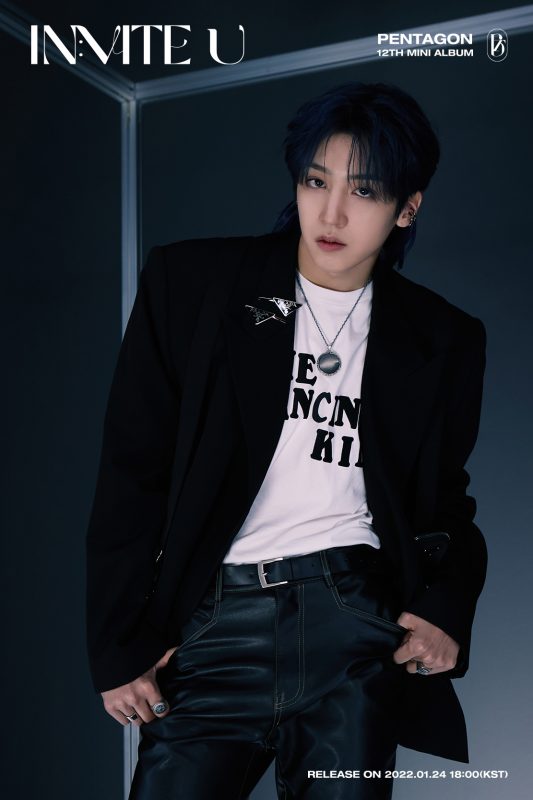 Wooseok (우석) is a South Korean rapper under Cube Entertainment. He is a member of boy group Pentagon and Wooseok x Kuanlin unit.

Wooseok Facts:
– He was born and raised in Gwangju, South Korea.
– Family: Parents, older sister (Jung Sojin)
– Education: School of Performing Arts Seoul, Arts Major (’17).
– He speaks Korean and can understand some English.
– He was a Cube Entertainment trainee since the second half of 2014, where he originally auditioned in order to become a model. At first he was trained to be a singer. During his audition he received great popularity from female audience thanks to his bright personality.
– In May 2016, he appeared on Mnet survival show Pentagon Maker. He debuted as the main rapper, vocalist and maknae (=youngest member) of boy group Pentagon on October 10, 2016, under Cube Entertainment.
– He can play the violin. He has won the special prize at a violin competition.
– He has also won the silver medal at a band competition.
– Specialties: Rap, lyrics composition.
– According to him, he has always been the tallest student in school.
– His hand size was measured to be 21.4 cm.
– He once tried to show off by having a spicy mukbang which ended up being too spicy for him.
– Likes: Anime, soccer.
– Dislikes: Cucumbers, being taken for granted. He gets angry everytime he’s taken for granted.
– He is good at singing. He is able to sing the soprano part of the opera.
– He and some of his fellow Pentagon members had cameo appearances in JTBC’s drama ‘Age of Youth 2’ as the Asgard group.
– He is the co-writer of Wanna One’s ‘Energetic’ & UNIT RED’s ‘No Way’ songs.
– He starred along with former Pentagon member E’Dawn in Jeon Soyeon‘s ‘Jelly’ MV.
– He’s pretty good when it comes to making on-the-spot three-line poems.
– He’s the one who usually does the beatboxing on Pentagon.
– He has admitted that he gets shy in front of people who like him.
– He debuted as a model in 2018 Hera Seoul Fashion Week with groupmate Shinwon.
– Wooseok is close with labelmate and former Wanna One‘s Lai Kuanlin. As of March 11, 2019, he and Kuanlin are part of Cube’s unit Wooseok x Kuanlin where he serves as the main rapper and main dancer accordingly.
– In the old dorm, Yuto and Wooseok used to share a room.
– For the updated dorm arrangement please check Pentagon profile.
– Wooseok’s ideal type: “Someone positive with a pretty smile who smiles often”.