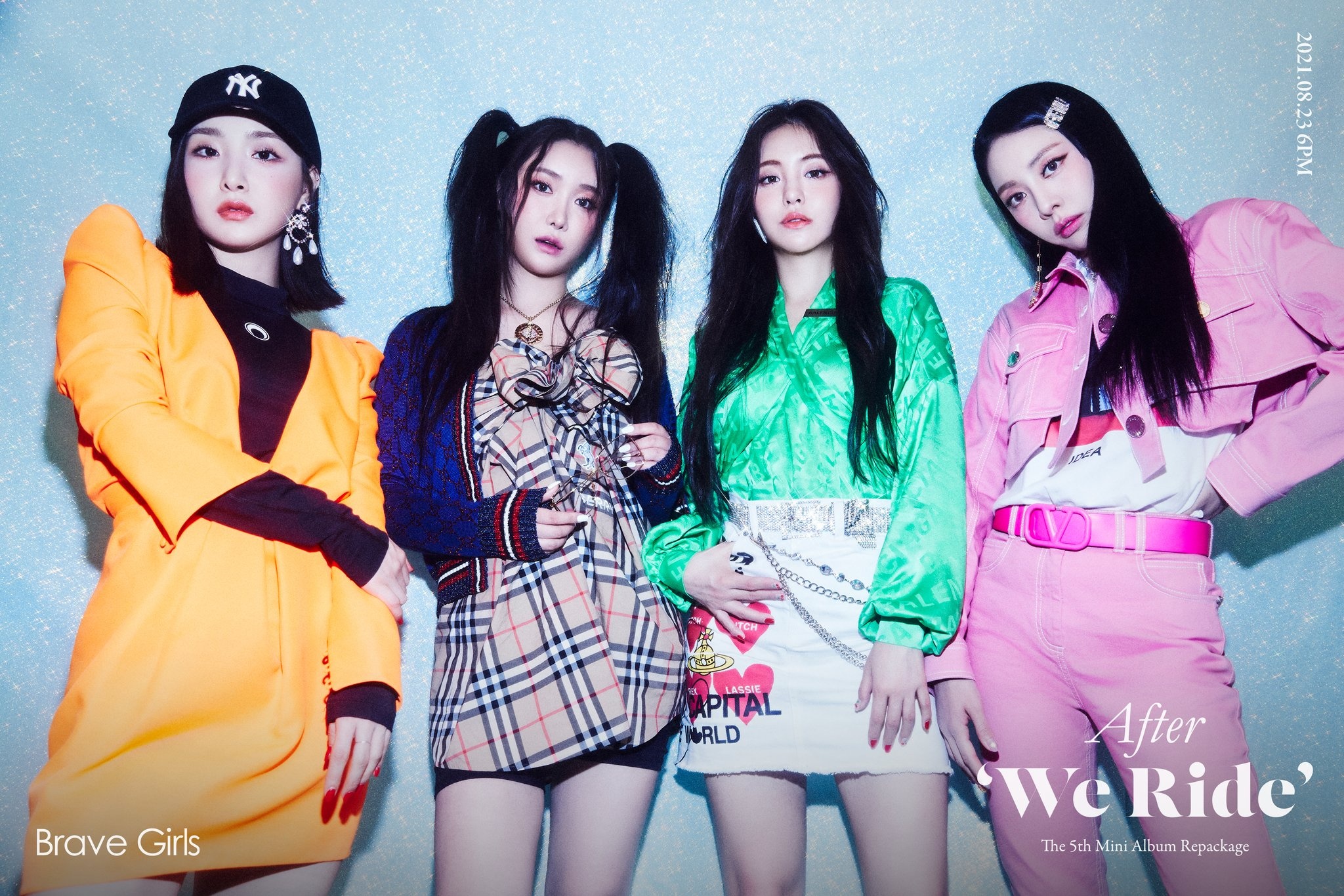 Brave Girls (브레이브걸스) is a South Korean girl group under Brave Entertainment. The current lineup consists of Minyoung, Yujeong, Eunji, and Yuna. The group debuted on April 7, 2011, with the single “Do You Know?“. 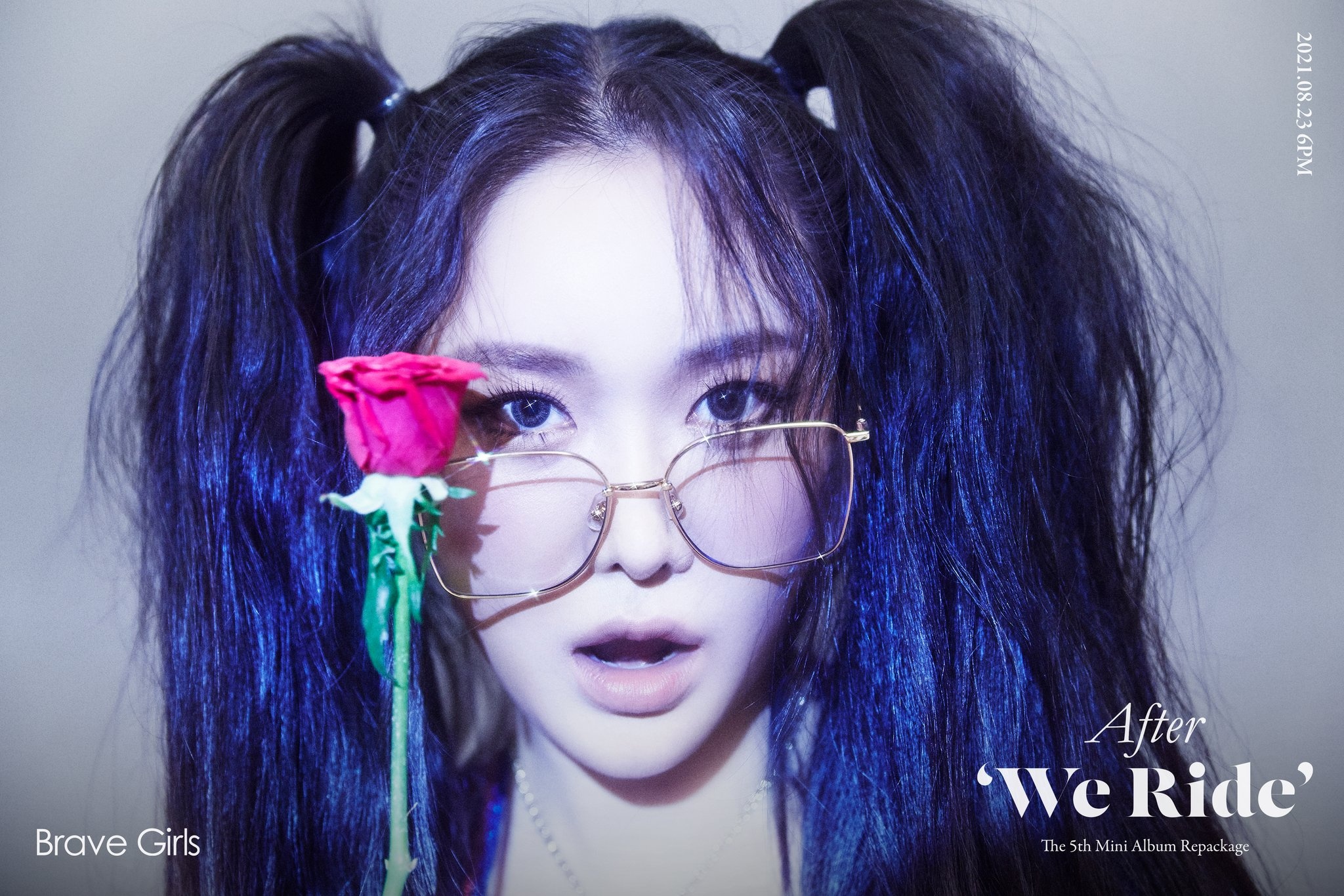 Minyoung Facts:
– She was born in Incheon, South Korea.
– She joined Brave Girls in 2015.
– Education: Hanyang University Dance Arts (she is currently under a leave of absence)
– She was majoring in traditional Korean dance, but she also studied ballet.
– Minyoung’s legs are on the cover of the High Heels mini-album.
– Her nicknames are Spicy Unnie and Ace Main Vocalist.
– She has a toy poodle dog called Yamyam, which has its own Instagram account.
– She is a main speaker for the group.
– As she states, she never had a hoarse throat after singing because she has naturally strong throat.
– As Yujeong says, Minyoung is the funniest member, even when she tries to hide it.
– As Yuna says, Minyoung sleeps the most.
– Mornings the first thing she does is to kiss Yamyam.
– Songs she likes are “Expectations” by Lauren, and songs by Kehlani, also “Rollin'” and “Whatever” by Brave Girls.
– The person she respects the most is her mom.
– She loves spicy food. Sushi is her favorite food, but she does not like shellfish or freshwater fish.
– She hates famine foods, and prefers fruit juice over coffee.
– Her favorite drinks are ginger ale and lemonade.
– She has low alcohol tolerance but can let herself to drink alcohol sometime.
– Her ideal type is a calm man.
Show more Minyoung fun facts… 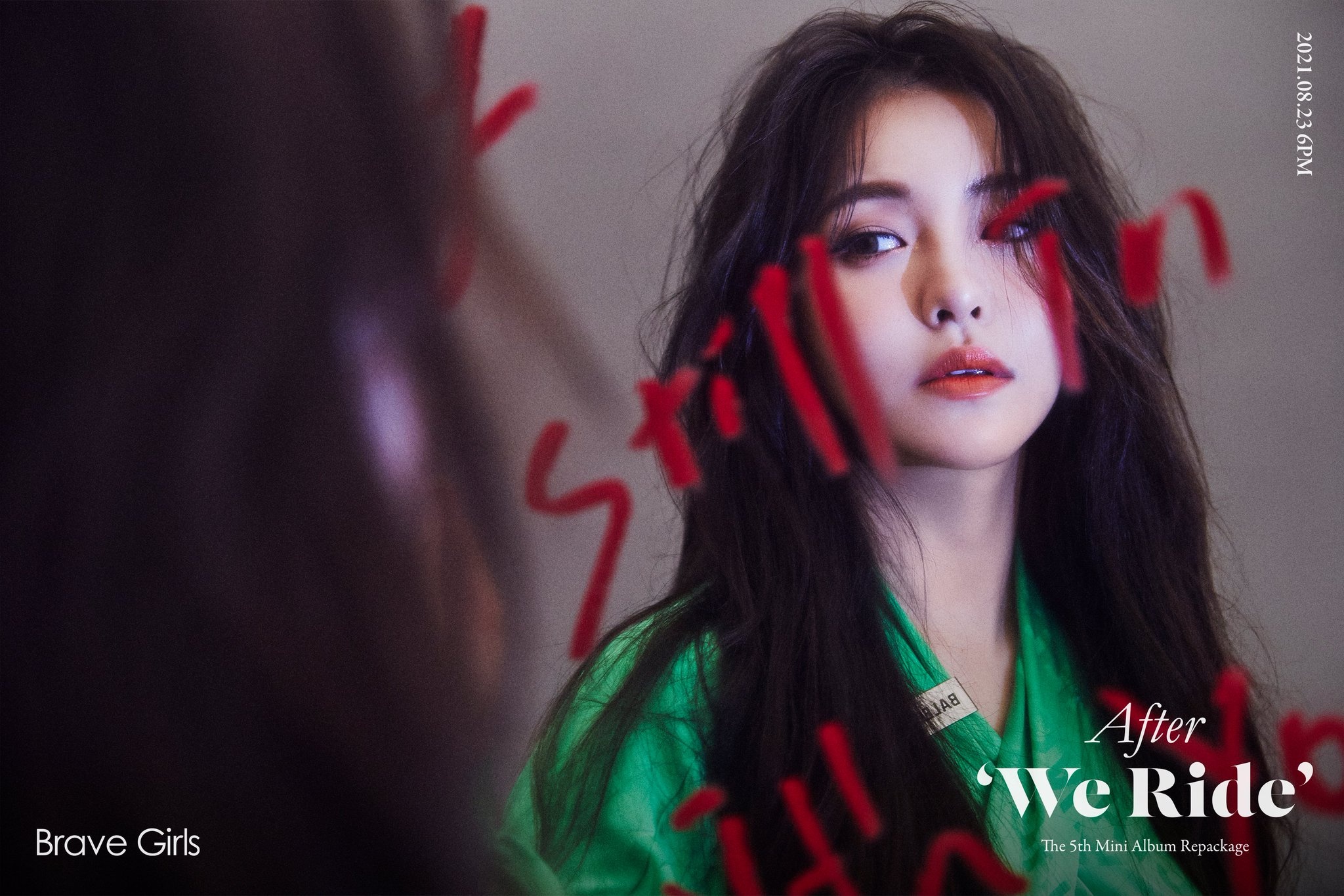 Yujeong Facts:
– She was born in Suwon, South Korea.
– She joined Brave Girls in 2015.
– Education: Sungshin Women’s University, Department of Media Communications.
– She can speak English because she studied in an international school in Hong Kong.
– She is considered as the cutest member. For her iconic eyesmile she was given a nickname Squirtle.
– She is in charge of bringing up group’s morale.
– Her hobbies are walking her three dogs once a day, reading and listening to music.
– She says she gives the most objective reactions out of the members (If it’s something funny she will laugh, if not, she won’t give a fake reaction).
– She is a main prankster of the group.
– She can imitate the talking manner of her boss Brave Brothers.
– The first thing she does in the morning is checking on her pet Laren.
– She respects the most her parents and her CEO Brave Brothers.
– She likes to eat spicy food, tteokbokki, giblets and sushi.
– She hates too sugared sweets (like macaroon), cucumbers and Korean melons.
– She has low alcohol tolerance, so she drinks alcohol only before bed.
– She is a hardcore fan of Rain, she even has a very rare album of him.
– She, along with Eunji, participated in the KBS survival show The Unit. She finished on the rank 37.
– Her ideal type is someone she cannot help loving.
Show more Yujeong fun facts… 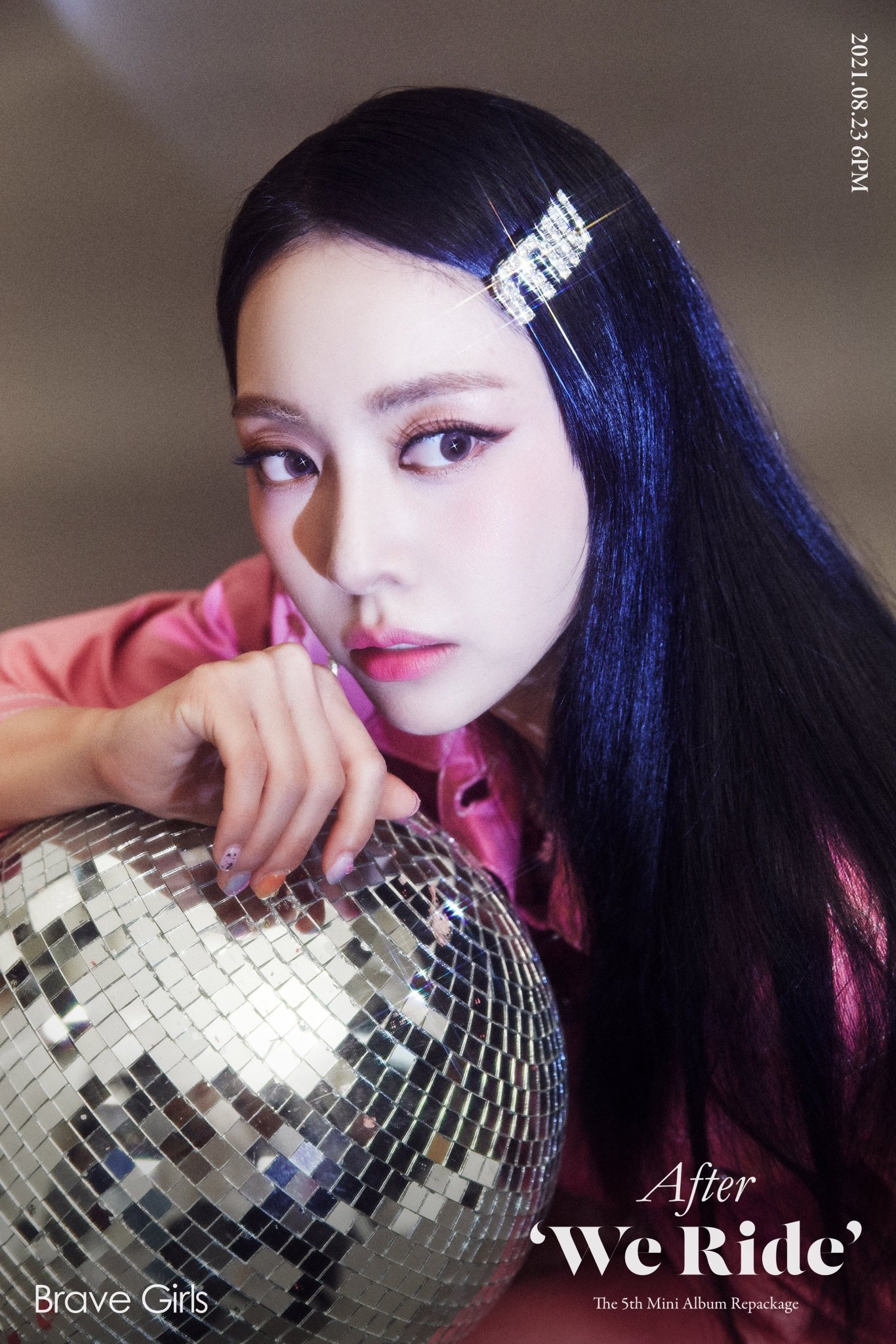 Eunji Facts:
– She was born in Yeosu, South Jeolla province, South Korea.
– She joined Brave Girls in 2015.
– Education: Myongji University Film and Musical (left of absence).
– She is known for her “big eyes”.
– Her nicknames are Goldeen and Hanyeseul.
– She is in charge of group’s clumsiness (sic!)
– As Yujeong says, Eunji is the clumsiest member.
– As Yuna says, Eunji is the most talkative member.
– She has a flexible body and is good at acrobatics.
– When her body is tense, her middle finger on the right hand will get twisted.
– She got a driving license in 2020.
– The first thing she does in the morning is checking her phone.
– The person she respects the most are her parents.
– She likes Western food the best, also she loves spicy food, and likes strawberry smoothies for beverages.
– She does not like to eat seonjiguk, naejangtang, fish roe soup, sea cucumber, sea pineapple and other seafood.
– She has low alcohol tolerance but drinks alcohol only for faster sleeping.
– She finished on the rank 48 in the KBS survival show The Unit.
– She featured in Park Bom‘s “Spring” promotions and stood in for her on the Queendom performance battle.
– Her ideal type is a courteous, honest man, who is cheerful all time.
Show more Eunji fun facts… 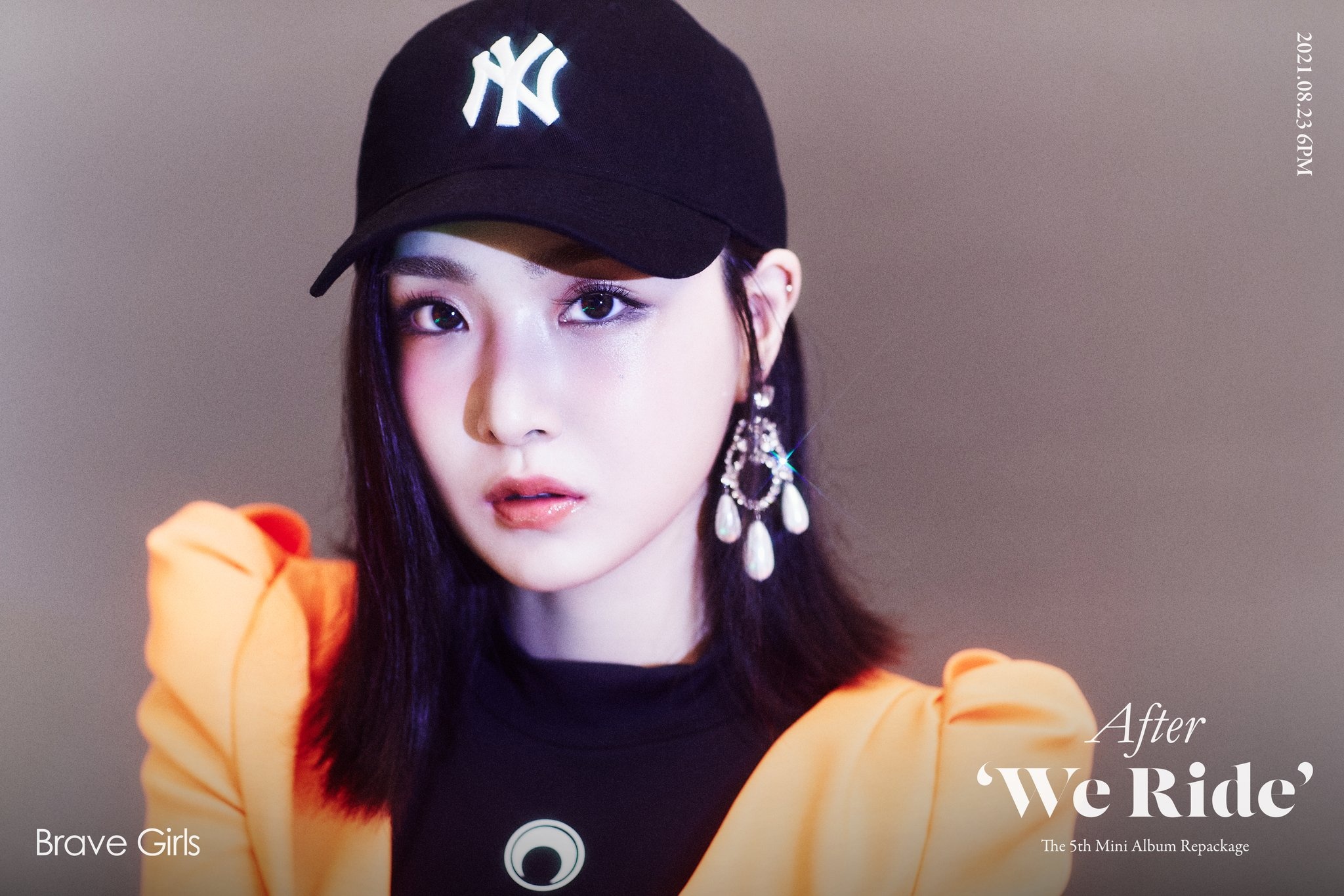 Yuna Facts:
– She was born in Jeju, South Korea.
– She is considered the charismatic and “boyish” member.
– She joined Brave Girls in 2015.
– Her nicknames are Thor (for her making noises when exercising) and Bob Cut Haired Sister.
– She likes reading poetry.
– She likes watching horror and gore movies alone.
– Her hobbies are tidying up, drawing and photography. For the latter she has an Instagram account specially for it.
– She said that one of her talents is her ability to “look tough” and chic.
– As Yujeong says, Yuna always makes typos when chatting, Yuna counters it that she is lazy to correct them.
– She nags her members a lot, so that Minyoung thinks Yuna deserves a title of a group’s leader.
– She is the main informer of the group about people’s opinion since she often looks at the comments about them.
– The person she respects the most is her mom.
– She likes any Korean food and mint chocolate (Yuna always shares it with other girls).
– She dislikes any food that has mushy textures like puddings, dried persimmon, sushi.
– She has low alcohol tolerance and she does not drink alcohol at all.
– Yuna joined the KBS survival show The Unit but unfortunately she did not pass the audition.
– Netizens think Yuna is Red Velvet’s Irene look alike.
– Her ideal type is a manly but humble man.
Show more Yuna fun facts… 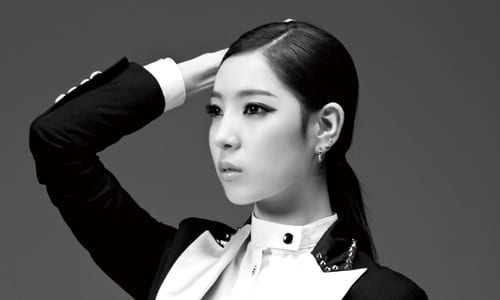 Eunyoung Facts:
– She was born in Busan, South Korea.
– She has a younger brother, her uncle is Shin Hakyun, and she is married.
– She attended Hansung Girls’ High School. 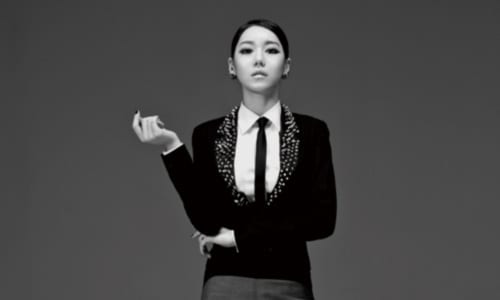 Seoah Facts:
– She was born in Jeollanam-do, South Korea.
– She has a younger brother and a younger sister.
– She attended Myongji University (Administration / Bachelor of Arts)
– She is a former member of Flying Girls in 2007. 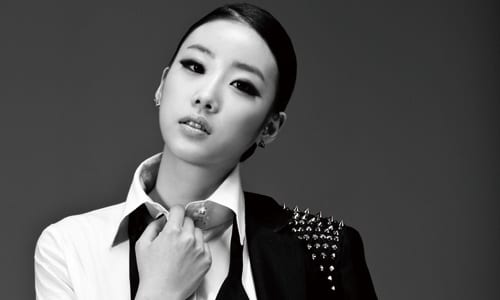 Yejin Facts:
– In January 2017, Yejin had decided to leave the group in order to study abroad.
– Yejin revealed in a YouTube video the real reason she left Brave Girls was actually because she was afraid for her own safety as their manager at the time (he’s not their manager anymore) was a reckless driver who would play phone games while driving them to their scheduled places.
– She has older brothers and two younger brothers.
– She attended Fraser Heights Second School & Chung-Ang University (Bachelor of Drama/Bachelor of Arts, Performance and Video Creation). 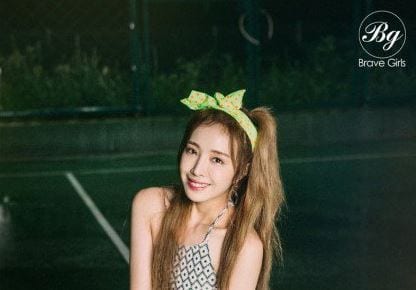 Yoojin Facts:
– On January 13, 2017, it was announced that she left the group.
– She is the older sister of P.O.P member Haeri.
– Since leaving Brave Girls, she appears to have left the public image entirely.

Hyeran Facts:
– She can speak English.
– She’s considered one of the best dancers in the group.
– On January 13, 2017, it was announced she will go on indefinite hiatus due to health issues.
– It was announced that she had left both Brave Entertainment and Brave Girls in March 2019.
– She is now working as a video director and editor.
Show more Hyeran fun facts… 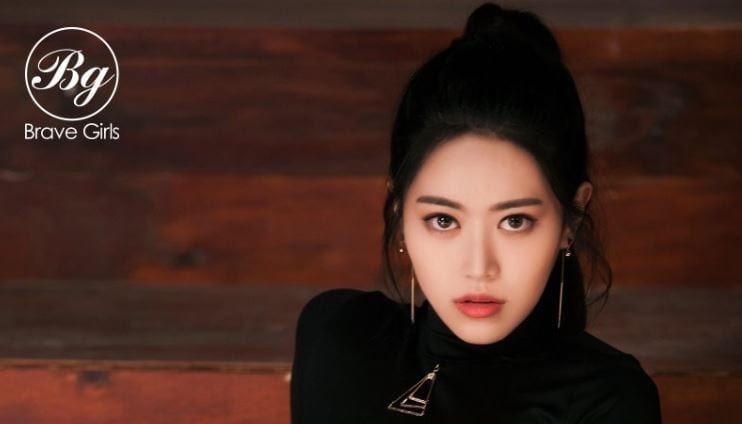 Hayun Facts:
– She was born in Busan, South Korea.
– She joined Brave Girls in 2015.
– She is often funny when she doesn’t intend to, but not funny when she tries to be.
– She is a former member of the duo DATE.
– Hayun didn’t participate in the new version of “Rollin” due to health issues.
– It was announced in March 2019 that she left the group.
– She is now a Twitch streamer and she uses the name Dalha (shortened form of Running Hayun).
– She signed to Sandbox Network in December 2020.
– She revealed in May 2021 that she left the group because of suffering from a thyroid condition.

Who is your Brave Girls bias? Do you know more facts about them? Feel free to comment below. It can help new fans find more info about them. 🙂 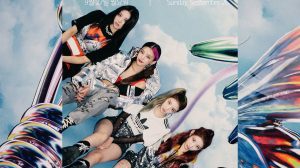 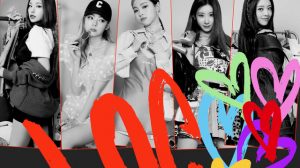 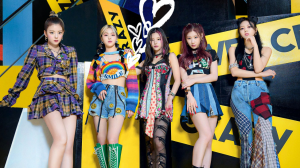