HOT ISSUE (핫이슈/Honest Outstanding Terrific Issue) was a 7 member girl group under S2 Entertainment. The group consists of: Nahyun, Mayna, Hyeongshin, Dana, Yewon, Yebin and Dain. They debuted on April 28, 2021 with the first mini-album Issue Maker and the title track 그라타타 (GRATATA). S2 Entertainment announced that the group would officially disband on April 22, 2022.

Nahyun Facts:
– She is from South Gyeongsang Province, South Korea.
– She attented High Up Vocal Academy.
– She is a former trainee of Cube Entertainment (2016) and Source Music (2017).
– She got accepted in the first round auditions for JYP Entertainment, FNC Entertainment, Jellyfish Entertainment, WM Entertainment and Starship Entertainment.
– She is friends with Bada from HINAPIA and Dia from PIXY.
– Nahyun and Yewon are roommates.
– She graduated from Seonjeong High School.
– Nahyun has/had braces
– Nahyun doesn’t know how to swim.
– If Nahyun could be an animal, she would like to be a seal, because it knows how to swim.
Show more Nahyun fun facts…

Mayna Facts:
– Individual fandom name: HotPot.
– She was born in Romania.
– She has lived in Spain.
– Her parents are from Zhejiang.
– She can speak Chinese, Korean and Spanish.
– She was a trainee under Yuehua Entertainment, Yin Yuetai, and SDT Entertainment.
– She trained in Yuehua Entertainment for 2 years.
– While being under Yuehua, she was also a member of YHGIRLS.
– She was a Produce101 China contestant finishing on rank #54.
– Motto: “I beg you to fulfill my stage dream”.
– She rates her visuals 8/10.
– She prefers dogs to cats.
– Her favourite colour is purple.
– She’s afraid of ghosts because they float.
– In summer, she prefers eating watermelon than ice cream.
– In winter, she prefers eating hot pot than than fried chicken.
– She would rather stay in bed & sleep in than get up early.
– Her most used app is QQ Music.
– She is a huge fan of BLACKPINK.
– She loves hotpot.
Show more Mayna fun facts…

Hyeongshin Facts:
– Her hobbies are exercising, listening to music and watching movies.
– She plays Tennis and Basketball.
– Her nicknames are Sini (시니), SShin (씬), Honey Maker (밀쪼)
– Education: School of Performing Arts Seoul (SOPA; Practical Dance department).
– She can speak English.
– She lived in Australia as a child.
– She’s good at dancing and exercising.
– She was a trainee at DreamT Entertainment and later All S Company.
– She was a member of the girl group ALLS-GIRL and the sub-unit Geupsik-Dan with D-CRUNCH.
– Her role model is CL.
– She was a member of a dance crew called Velvety.
– She was a contestant on CAP-TEEN where she ranked #7.
– Hyeongshin took part in writing the lyrics for their b-side Hide In The Dark.
– Hyeongshin has a special ability to imitate people.
Show more Hyeongshin fun facts…

Dana Facts:
– She can compose and write lyrics and was credited on the group’s B-side Hide in the Dark.
– She graduated from Jungshan Middle School and graduated Seoul Performing Arts High School in Practical Music Department.
– She was a child actress.
– She acted in Happy Ending 해피 엔딩) in 2012 on JTBC and One-Well Raised Daughter (잘 키운 딸 하나) in 2013 on SBS.
– She is a former trainee of YG Entertainment.
– Her MBTI is ENFP.
– Her nickname is Snowball.
– Her baptismal name is Anisia.
– She is friends with Dayeon from KEP1ER.
– If Dana could be an animal, she would like to be a cat inside a spacious and quiet house
Show more Dana fun facts…

Yewon Facts:
– Both her father and older sister are actors, and she was also a musical actor.
– She appeared on Global Junior Show (스타 주니어쇼 붕어빵) in 2013
– She is a former trainee of Fave Entertainment.
– She is a former member of FAVE GIRLS.
– Nahyun and Yewon are roommates.
– She graduated from Balsan Middle School.
– Her nicknames are Best Singer Kuromi and Baby Pine Marten.
Show more Yewon fun facts…

Yebin Facts:
– She attended ON Music Academy.
– She is a former trainee of Source Music.
– She can belly dance.
– She has two hamsters.
– She attends Taejang High School
–  One of Yebin’s hobbies is to balance on a gym ball
– Role Model: Yooa from Oh My Girl
– Her nicknames are Baby Wolf and Hamchi
Show more Yebin fun facts…

Dain Facts:
– She was a contestant on CAP-TEEN where she ranked #43.
– She earned a GED to complete her education rather than graduate high school.
– Her hobbies are taking photos of foods and playing the gayageum.
– Her speciality is cooking.
– Her special ability is making dog sounds.
– Her nickname is Apeach.
– She is a former trainee of P-NATION Entertainment.
– She trained for one year.
– Her favorite color is pink
– She’s happy when wearing pink clothes.
– She likes sweet foods.
– She has recieved her GED.
– Her favorite food is chocolate ice cream cake.
– She can distinguish different chocolates just by tasting them.
– She likes cheese and rice cake bread as well.
– Her favorite cheese is the one that goes well with rice pasta.
– If Dain could to be an animal, she would like to be a squirrel, so that she could roam freely in the woods.
– She wants to be an idol because she wants to make others happy.
Show more Dain fun facts…

(Special thanks to @HotIssueINTL and @s2hotissue on twitter, #.# lumie, nugu stan, Midge, AkashiXd, handongluvr, ONE, Oren, allison / rain, Forever_kpop___ for providing me with more info)

Note 2: At their debut showcase, they confirmed that they have no fixed positions.

Who is your HOT ISSUE bias? Do you know more facts about them? Feel free to comment below. 🙂 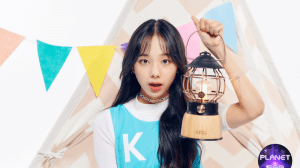