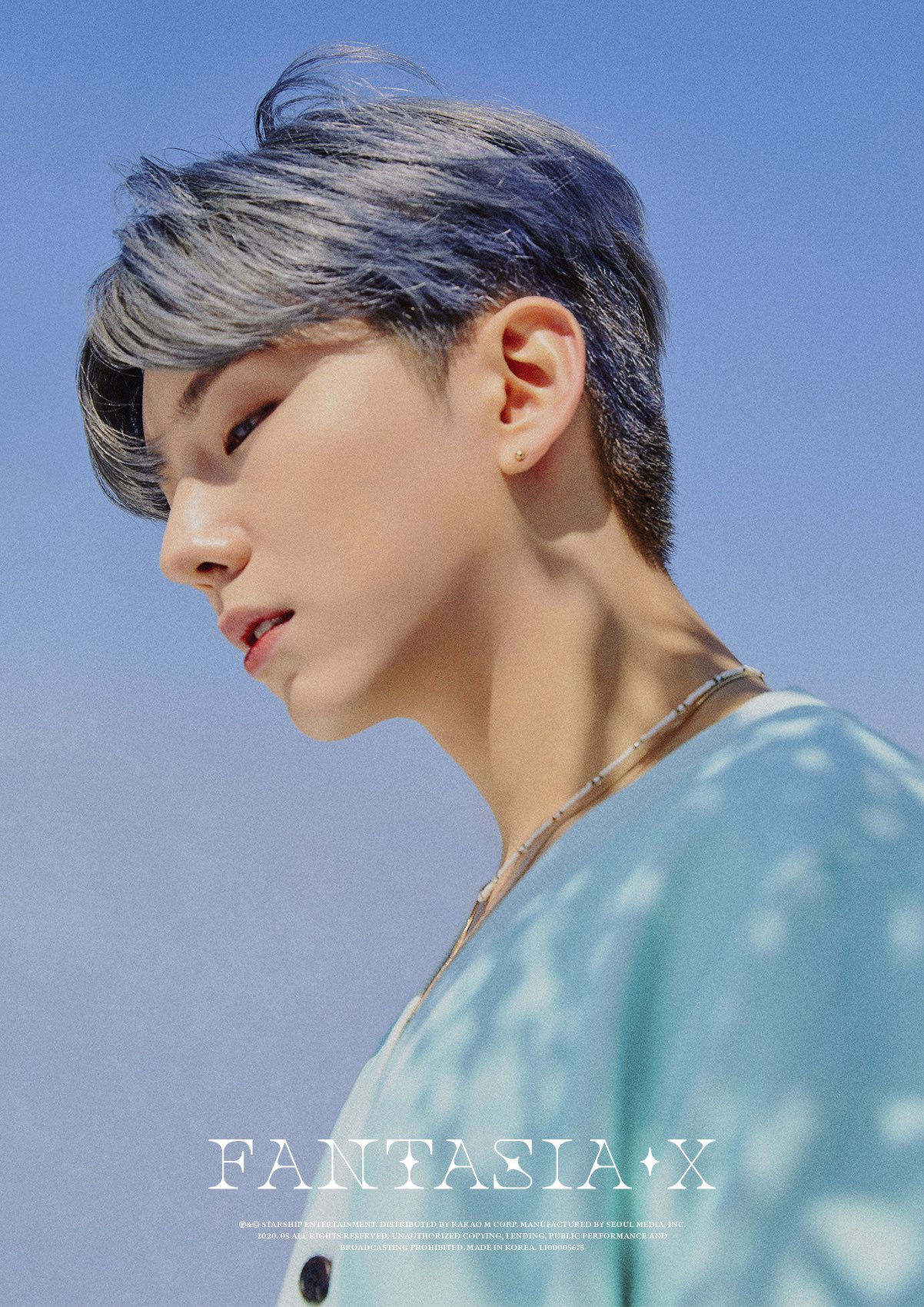 Kihyun facts:
– Kihyun was born in Goyang, South Korea.
– He has an older brother (2 years older) that lives in Japan. (vLive)
– He was the 3rd trainee confirmed as a member of Monsta X (after survival TV show “No Mercy”).
– He’s the best vocalist of the group.
– He graduated from DIMA, Dong’Ah Institute of Media and Arts.
– He likes composing songs and writing lyrics.
– He helped composing some of Monsta X’s songs.
– He can play the piano and the guitar.
– He released a single with Sistar’s Soyou & Giri boy titled “Pillow”.
– Kihyun said he would like to release a duet with fellow Monsta X member Hyungwon.
– He has a baby niece (and he loves her a lot).
– He can speak a bit of Mandarin.
– He says he’s the best cook out of the members, since he has experience as a chef.
– According to him the rest of the members are horrible cooks.
– He’s especially good at making ramen.
– He keeps peach water in the dorm fridge (the peach water was given to him by his mom and grandma).
– He is the cleanest member in the dorm.
– In the old dorm he shared a room with Minhyuk, Jooheon and I.M.
– Update: In the new dorm he has his own room.
– He said his cleaning nature came from his father whom he takes after.
– He shared his favorite song is Joe Hisaishi’s “Merry-Go-Round” from the Howl’s Moving Castle soundtrack.
– When Kihyun appeared on “Masked Singer” the fans recognized his voice right away.
– He said he’d like to be like artist Kim Gunmo.
– Kihyun listed Michael Jackson as a foreign artist whose vocals he admires.
– Some of Kihyun’s nicknames are: “Cutie” because he is cute, Kirange, which is a combination between his name and his orange colored hair and Tinie, due to his small size.
– Only Kihyun and Shownu consider themselves very attractive, the rest of the members consider themselves as being “ok”.
– He has cute dimples on his cheeks.
– Kihyun has a habit of tilting his head back when he laughs loudly
– He can speak English
– He can’t do aegyo.
– He owns a few bottles of perfume.
– Hobbies: Dancing and hanging out with friends.
– His favorite color is Blue.
– One of his favorite food is chicken.
– He doesn’t like cranberries.
– He’s most thankful to Shownu recently
– He’d like to share a room with I.M because they’re both light sleepers and because I.M doesn’t do a lot
– These days he wants to hear people say that his stage was cool
– Kihyun holds one of the title 3 legendary finger-flickers among the idol because it hurts so much that can lump when it hits. (The other are Onew Shinee and Jimin BTS)
– He wants to change into a president for one day
– Shownu gave him the best first impression
– For his doljabi (Korean tradition for when a baby is 100 days old) he chose a pen
– He’s not sorry/regretful towards of the members
– He wants to sing lullabies for monbebe
– He said Hyungwon is the hardest to wake up
– During fan signs, the thing he wants to do the most is hold fans’ hands tight and talk with them
– He said his weakness is that he gets stressed easily
– Members voted Kihyun as the member who acts like a maknae. (Qmentary)
– Kihyun said Wonho knows everything about him because Kihyun and Wonho stay at home a lot together (Amigo TV season 4 ep.3)
– Kihyun and BTS’ Suga are close friends.
– He can’t eat fish because it has a strong smell.
– Kihyun has a cooking show he does on their Vlive and also used to host Mon Happy Radio, a radio show of sorts, alongside Minhyuk and can be viewed on Vlive.
– He sang the “One More Step” OST for “She was pretty” Korean drama.
– He sang “Love Virus” together with Cosmic Girls’ Seola as the OST for “What’s Wrong with Secretary Kim”.
– He also sang several other OSTs: “Attractive Woman” OST. for “Orange Marmalade” (ft.Jooheon);
“Can’t Breath” OST for “Investigation Couple” (ft.Jooheon); “The Tiger Moth” OST for “Shopaholic Louis” (there are 2 versions: Kihyun sang the acoustic version, and MONSTA X the rock version); “I’ve Got a Feeling” OST for “Suspicious Partner”
– Kihyun’s ideal type: a girl who seems like a baby and has a lot of aegyo.