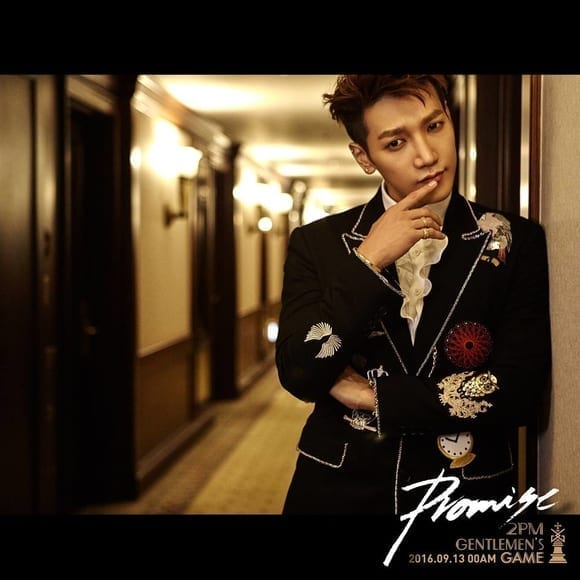 Jun. K (준케이) is a solo artist and a member of the South Korean boy group 2PM.

Jun. K Facts:
– His hometown is Daegu, South Korea.
– His family consists of his Mother, a younger brother, and his father who passed away in 2012.
– He attended Dong-ah Institute of Media and Arts for his bachelor’s degree and  Kyunghee University’s Media Information Graduate School for his masters.
– His birth name was Kim Junsu, but on October 17th, 2012, he legally changing his name to Kim Minjun (due to family reasons).
-His position in the group is as Main Vocalist.
-He is under JYP Entertainment.
-He is the oldest member of 2PM.
– He was also accepted into YG Entertainment, but he ended up choosing JYP Entertainment.
– He won several song writing and poem contests before he debuted.
– He received over 70 awards for essays and book reports in elementary and high school.
– Junsu was his former stage name.
–  He has the ability to speak Korean, English, and conversational Japanese.
– He used to be quite a troublemaker. He broke several of JYP’s rules.
-Jun. K suffered a broken elbow and finger after falling off a stage at a 2PM concert.
-On February 13th, 2018, he was caught driving under the influence.
–  G–Dragon and Taeyang of Big Bang are his friends.
– Composing songs, fashion, collecting accessories and shoes are his hobbies.
-He has sensitive skin so he often wears a black tank top under his clothes to protect his skin.
-He was a cast members on the first season of ‘The Romantic & Idol’. He was paired with Jei (ex-FIESTAR) and Hyejeong of AOA.
– He released his first solo single “Alive” in 2011.
– He played D’Artagnan in the musical “The Three Musketeers” in 2012.
– He played Daniel in the musical “Jack the Ripper” in 2013.
– He released his Japanese solo album “Love & Hate” in 2014.
– In 2014, his “Love & Hate” concert tour ranked in the Top 10 Best Concerts in Japan, making him the only K-pop idol on the list.
– He released his 2nd solo Japanese album “Love Letter” in 2015. It reached 1st on the Oricon daily album charts.
– He released his 1st Korean album, “Mr. NO♡” in July of 2016.
– IHe released his 3rd Japanese solo album, “No Shadow” in December of 2016. It also reached 1st on the Oricon daily album charts.
– Jun. K released his 2nd solo Korean album, “77-1X3-00” in January of 2017.
– He was the first 2PM member to composed a title track for the group – “Go Crazy” (2014).
– He also composed their title track “My House” in 2015.
– After J.Y Park, he composed the most songs for JYPE.
-In 2016, he was a contestant on King of The Masked Singer as ‘Dream of The Square’.
– On May 8th, 2018 he enlisted in the military, and was discharged on January 2nd, 2020.
-While serving in the military he became the commander of his division and a Special Warfare Command Award.
– Jun. K’s Ideal Type: He likes women who work and have a successful career.

Do you like Jun. K? Do you know more facts about him?Feel free to comment down below.