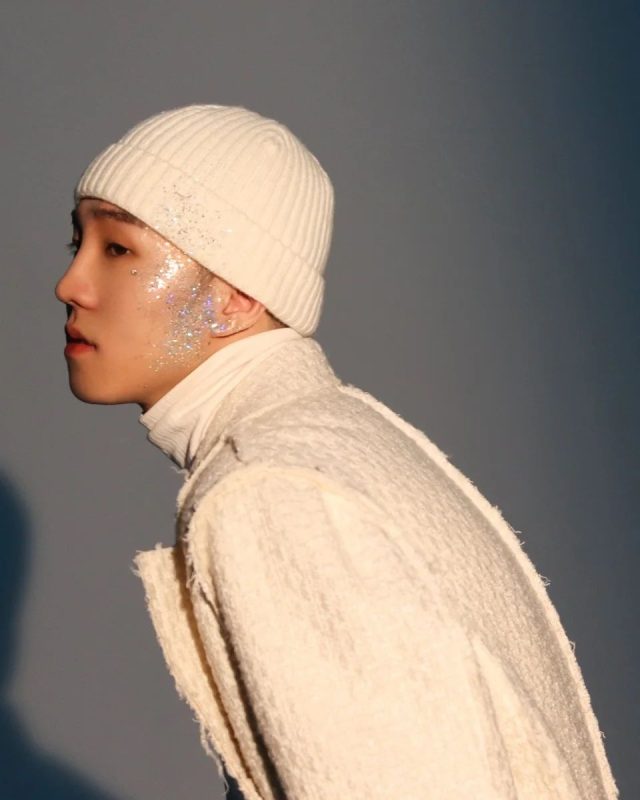 BE’O / 비오 is an South Korean rapper under FameUs and BPM Entertainment.

BE’O Facts:
– His MBTI is INTJ.
– His family is catholic.
– BE’O means rain in Korean.
– Born in the year of the Dragon.
– Family: Parents. He’s an only child.
– Chanwook has an Birman cat.
– He’s both a cat and a dog person.
– His favorite number is Zero.
– Favorite colors are Black and White.
– He loves western food, mostly pasta.
– Hometown is Gwangmyeongsi, South Korea.
– Spare time is where he makes time to play with cats.
– A former student of School of Performing Arts Seoul / SOPA, majored in rap.
–  Debuted in April of 2020 when he joined SAN E‘s record label FameUs.
– In March of 2022, he was signed to Big Planet Made.
– Still under FameUs, BPM has a co-management with FameUs.
– A former contestant on High School Rapper3 in the Grade 3.
– He rapped to ‘DNA‘ by Kendrick Lamar‘s beat. He was in the “Kim Mingyu team”.
– Gained 154 points which wasn’t enough so he was sadly eliminated from the show.
– In Sept. of 2020, he released his first album, ‘Monster’.
– Appeared on SMTM9. During that time he thought it was exhausting as the atmosphere was quite intense.
– In 2021, he joined SMTM10. He ended up at 3rd place, but showed great potential throughout the show.
– During the recording of SMTM10, he lost 6kg / 13,3 lbs.
– He hasn’t gotten a nose job, despite what OUREALGOAT said during the battle.
– BE’O has mentioned that the guys pulled a lot of pranks on each other behind the scenes of SMTM10.
– It’s very easy to fool Anandelight and Mudd the Student as they both are naive as they’re kind hearted people.
– Someone whom he grew close through SMTM10 was Gray as they spent lots of hours together.
– Has stated that everyone in GRAYNOMA got along very well with everyone.
– A person he found was the hardest to become friends was MINO as BE’O was scared of him at first.
– His lockscreen is a quote: “Stay true to Myself”, he wrote it to himself.
– He wants to make songs that can give people strength.
– Already at a young age, he knew that he didn’t want a normal life.
– He wants to let his hair grow out, so he can tie his hair.
– His 3 favorite ice cream flavors are Puss in Boots, Rainbow Sherbet and Mint chocolate chip.
– He isn’t a huge fan of mint chocolate, but he finds Baskin Robbins’ ones delicious.
– His favorite time of the day is 2 am.
– Has mentioned that he goes to bed at 5 am and wakes up before 10 am.
– BE’O wears contact lenses and glasses.
– He got his last piercing in 2018.
– He prefers rock hiphop, he also likes trap music.
– An Chinese group whom BE’O listens to is HIGHER BROTHERS / 海尔兄弟.
– Has two shoe sizes; 270 mm and 280 mm, around 43 and 44, 5 in EU sizing.
– He can never fully get used to being apart from his friends.
– BE’O doesn’t seem to cry when he’s feeling lonely or sad.
– Has mentioned that he doesn’t want something that anyone can have.
– At the moment he’s not going to make Q&A’s a regular thing on IG stories.
– His reasoning to using the black heart emojis is simply as it feels more sincere.
– Him and MINO exchanged rings with each other.
– Something BE’O has learned this year is to have patience.
– Curiosity, envy and impatience are some of his motivators in life.
– A fan asked him to choose between five mudds or 15 year old mudd, he chose 5 mudds.
– His favorite beanie is the one from a fan he got recently.
– BE’O has no plans in releasing the songs that he has deleted on SC.
– He loves Justin Bieber, he listens to ‘Boyfriend‘ a lot.
– BE’O wants to collaborate with Justin Bieber someday.
– When he performed ‘The Night Without You‘ at the SMTM10 finals, ASH ISLAND featured.
– BE’O and ASH have known of each other for around 3 years.
– Released ‘Counting Stars‘ in 2021 with Beenzino as a feature.
– In Dec. he had a collaboration with GAEKO, CHANGMO, Don Mills, Los, DeVita, SOLE, and SINCE.
– He was featured on COOGIE‘s ‘Good Night‘ in Jan. of 2022.
– Not finding inspirations doing music is his biggest fear.
– In 2022, he wants to release a lot of songs as he didn’t get to release many songs in the past two years.
– In April 2022, he was featured on SOYOU’s ‘Business’.
– Featured on Paul Blanco‘s ‘Summer‘ in June 2022.
– Released his first Mini Album on 29th Sept. 2022.
– BE’O’s Ideal Type: A woman with white skin, and pretty hands with lots of aegyo (cuteness).

His Tattoos and Piercings:
– An tattoo of RENDEƵVOUS.
– Daisy on his wrist as he likes daisies, and daises means ‘peace’.
– An King’s crown tattoo; ‘let’s meet again at the top’.
– Cloud tattoo as he was going through a difficult time in his life.
– Lightnings and rainfalls tattoos as his life had too many ups and downs.
– An customized designed tattoo on his right inner arm.
– A balloon tattoo that’s smiling.
– An XXXX tattoo, during that time he wanted to say “No”, “I don’t think it’s right”, “I hate it” to many things.
– Has two earlobe piercings.
– Chanwook has a microdermal anti eyebrow piercing on the right side.

Do you know more facts about BE’O? Feel free to comment down below. Thank you for your help!