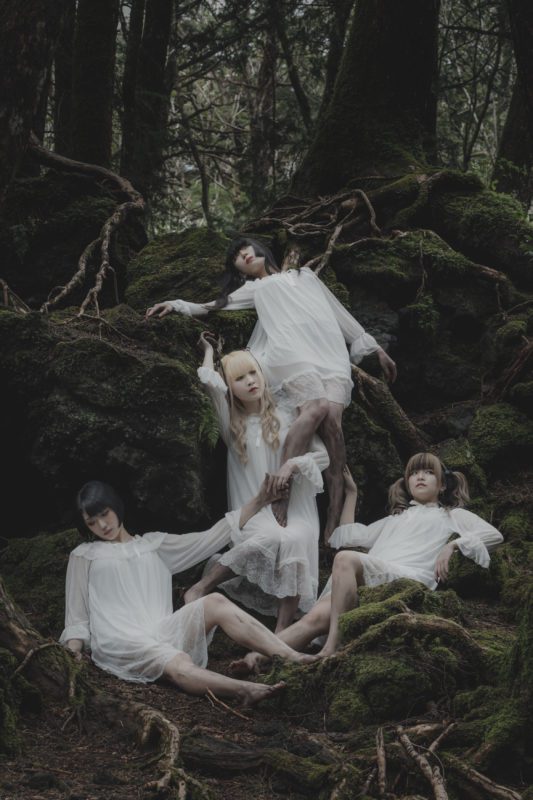 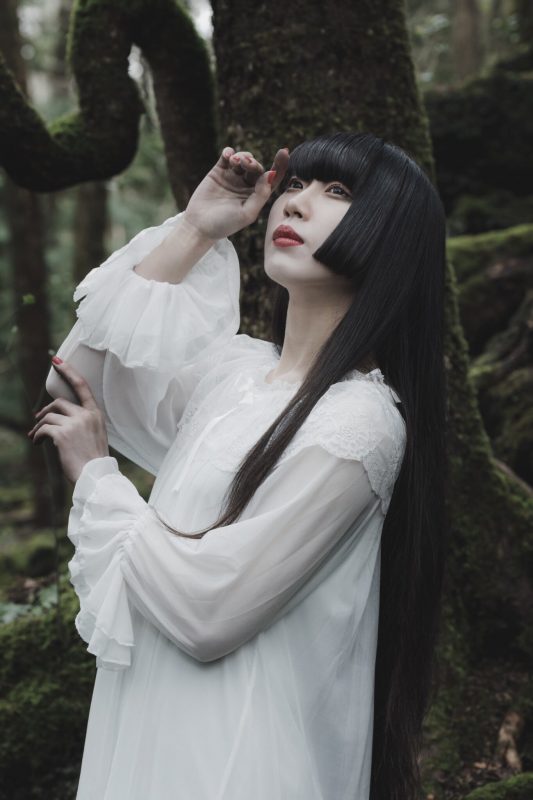 Tsukishiro Himari Facts:
– Her member color is midnight/witching hour.
– She joined NECRONOMIDOL on January 5, 2017.
– Used to be a member of the original lineup for Bakuon Dolls Syndrome formed in 2013. She graduated on December 30th 2016.
– Her nickname is Hima.
– Her special skills are calligraphy and flute.
– Catchphrase: “I love Japanese animation”.
– Her hobbies are anime, reading, traveling alone, eating, spending time with her little sister.
– Her favorite anime is Cardcapturer Sakura. She also likes Haikyuu!! and K-ON!.
– Her title is Owl.
– She is easily identified by her height and long hair.
– She is the otaku of the group.
– She wants to perform at Japanese culture events and anime conventions all over the world.
– Himari wanted to become a magical girl when she was young.
– Her first solo photobook is called Dear Moonlight.
– She is friends with Rei, former member of BURST GIRL 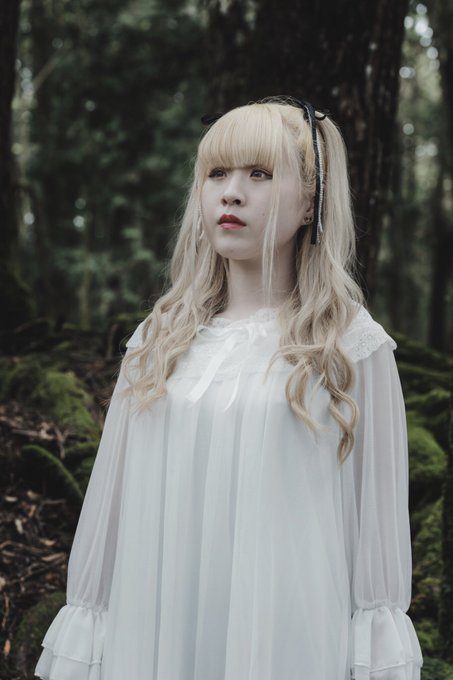 Kamino Nana Facts:
– Her member color is deep crimson.
– She was revealed on May 1st 2020 together with Toda Roa and Rukawa Shiki.
– She is a former member of HYSTERIC JAPAN and debuted on February 18th 2018 under the stage name Nana. She graduated from the group in August 2019 after she expressed that she wanted to see a different part of the entertainment world.
– She is born in Kanagawa prefecture, Japan. (HYSTERIC JAPAN profile)
– Her hobbies are SNS and watching movies.
– She likes Disney.
– Her special skill is taking selfies.
– She appeared on 神様と過ごした10日間2015 (trans. Hiroshe Project: 10 days with God 2015) and 両極の乙女 〜BLUE HEARTS〜 (trans. Bipolar Maiden〜BLUE HEARTS〜) (HYSTERIC JAPAN profile) 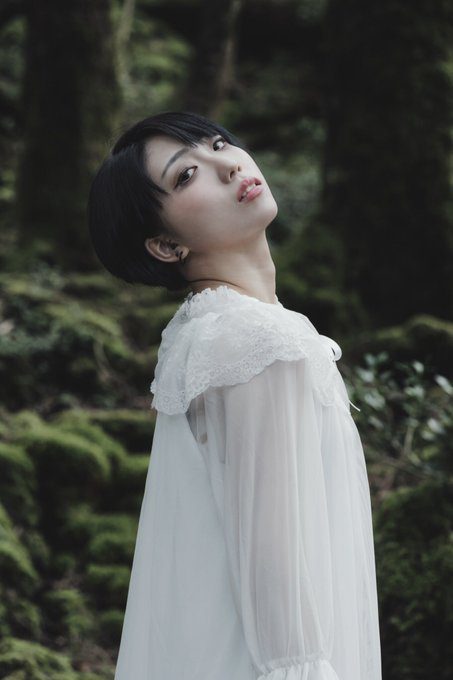 Rukawa Shiki Facts:
– Her member color is chinese bellflower.
– She was revealed on May 1st 2020 together with Toda Roa and Kamino Nana.
– Her hobbies are illustration, movies, music, going to karaoke alone, and eating MINTIA.
– Her special talent is changing her voice. 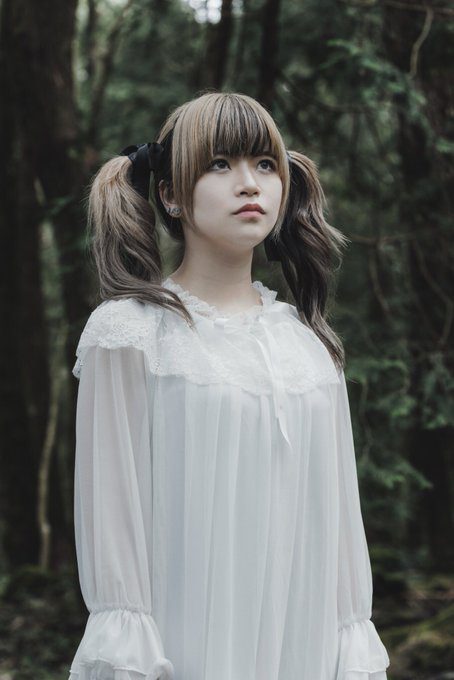 Toda Roa Facts:
– Her member color is dusk.
– She was revealed on May 1st 2020 together with Rukawa Shiki and Kamino Nana.
– Her hobbies are manga, games, and window shopping.
– Her special talent is whistling. 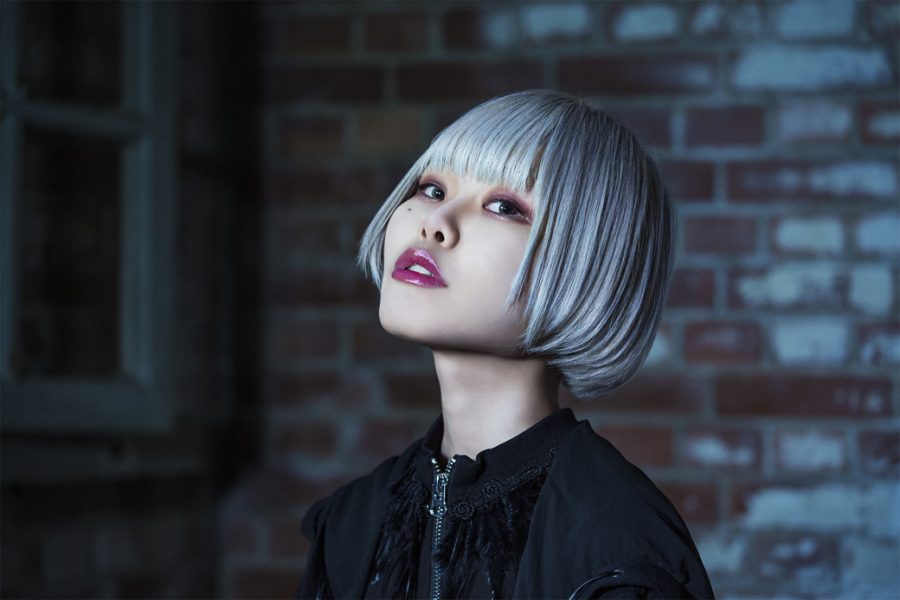 Michelle Facts:
– Her member color is sea foam green.
– She was revealed January 13th 2019 together with Kenbishi Kunogi.
– On March 16th 2020, she withdrew from NECRONOMIDOL together with Imaizumi Rei and Kakizaki Risaki.
– Her nickname is Miche, and they are posting online that they are hanging out even after leaving the group.
– She is an AI from the dark web.
– Her hobbies are fashion and design.
– She is closest with Kenbishi Kunogi.
– When she was a member, she was in charge of costume design and creation. (Närcon 2019 Q&A)
– Her title is Baby and AI DOL.
– Her special skill is walking.
– She used to study fashion.
– She did not have any prior idol experience before joining NECRONOMIDOL.
– May 7th it became public that Michelle had signed with M-SMILE, and that she will be starting a new project as a creator. 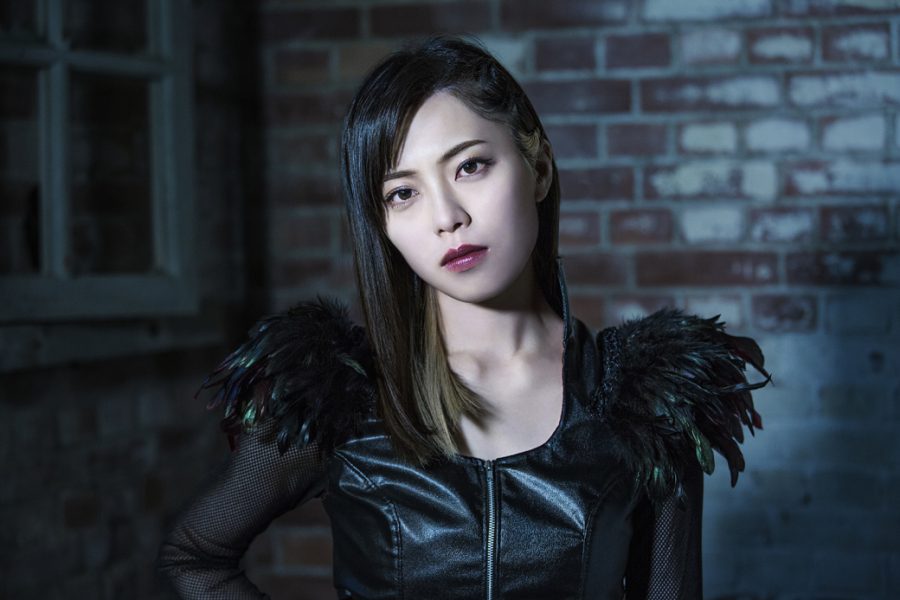 Kakizaki Risaki Facts:
– Her member color was azalea/rhododendron, but changed to red/crimson after Yotsuyu Hina left.
– She was a part of the original lineup for NECRONOMIDOL from 2014.
– On March 16th 2020, she withdrew from NECRONOMIDOL together with Imaizumi Rei and Michelle.
– Kakizaki Risaki was the last member from the original lineup to graduate/withdraw.
– Her nicknames are Okaki and Kaki-chan.
. She was the ace of the group until 2019.
– She was the leader from January 2019 to March 2020.
– Born in Aomori prefecture, Japan.
– Her title is Ninja.
– Her hobbies are horror movies and looking at floor plans.
– Her favorite movie is Texas Chainsaw Massacre.
– Her special skills are eating spicy food, throwing Frisbee, splitting two eggs at the same time, and singing imitations.
– When she was in NECRONOMIDOL,she was in charge of teaching dance and vocal, and creating choreography. (Närcon 2019 Q&A)
– Her favorite artists are Nakamori Akina, Oguro Maki, and Otsuka Ai.
– Her favorite idol groups outside of NECRONOMIDOL are There There Theres and BILLE IDLE.
– Her favorite fictional characters are Keigo Atobe (Prince of Tennis), Seto Kaiba (Yu-Gi-Oh!), Doraemon, and Kirby.
– Favorite food: spicy food, motsunabe, dried mango, and foreign sweets.
– May 7th it became public that Kakizaki Risaki had signed with M-SMILE, and that she will be part of a group formed together with Imaizumi Rei.
– She is now a member of the group MANACLE. 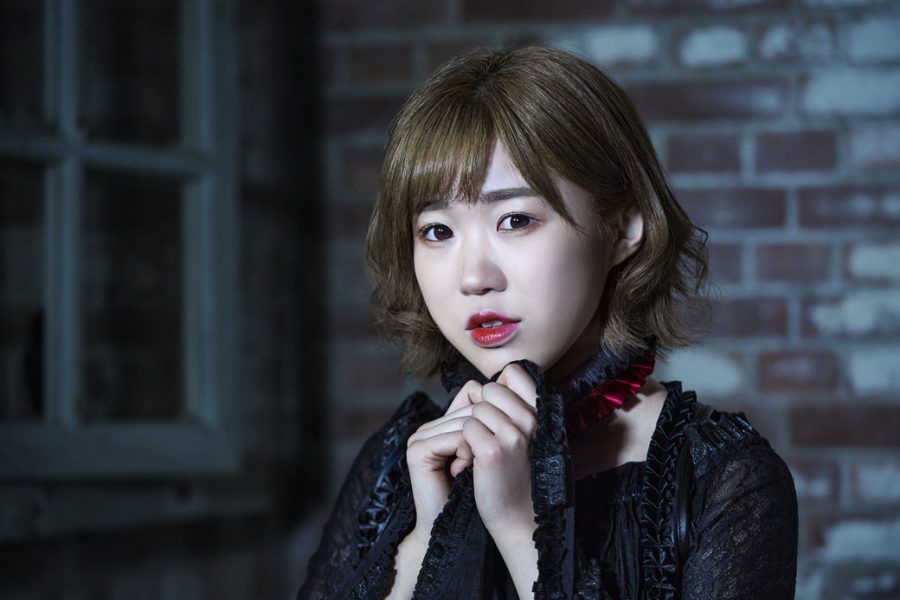 Imaizumi Rei Facts:
– Her member color is dawn.
– She joined NECRONOMIDOL on November 2nd 2016.
– Promoted as a solo idol while in NECRONOMIDOL.
– She was born in London (United Kingdom), but only lived there for a few weeks before her parents moved back to Japan.
– Her nickname is Rei-chan.
– Her title is Healer
– She was the ace of the group from 2019 when Kakizaki Risaki took the leader position.
– Her hobby is Hello! Project Idols.
– Her special skills are piano, sewing, and eating delicious food.
– She is a fan of many idols and idol producing shows. (Närcon 2019 Q&A)
– Rei released her first solo single titled Oshioki no Uta on September 24th 2018.
– Catchphrase: “I will bring a smile to everyone!”
– On March 16th 2020, she withdrew from NECRONOMIDOL together with Kakizaki Risaki and Michelle.
– May 7th it became public that Imaizumi Rei had signed with M-SMILE, and that she will be part of a group formed together with Kakizaki Risaki.
– She is now a member of the group MANACLE with the stage name Ray Imaizumi. 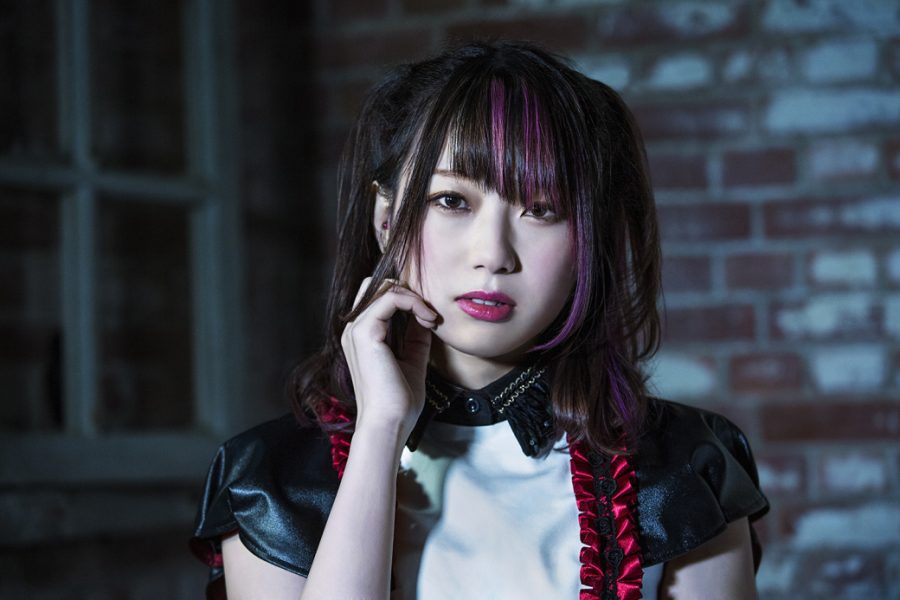 Kunogi Kenbishi Facts:
– Her member color is futarishizuka.
– She was revealed January 13th 2019 together with Michelle.
– She used to be in Gokigen Teikoku and was active from around 2015-2016, with the stage name Kunogi Hibiki. She withdrew March 12th 2018 to focus on her solo activities.
– On September 28th 2019 she graduated from NECRONOMIDOL after doing multiple photography sessions without approval from management, and after her expressing that she wanted to take a different direction with her career.
– Her hobbies are watching anime, taking pictures of Times signs, and occult.
– Her favorite anime character is Lelouch from Code Geass. (Närcon 2019 Q&A)
– Her special skills are mischief, goldfish scooping, and flick input on mobile phones.
– She likes grapes, gravure, and anime.
– Her title is Princess.
– She is from Kanagawa prefecture, Japan.
– She is vocalist a band called Mu Lilium.
– She is the closest with Michelle, and they are posting online that they are hanging out even after leaving the group.
– She is currently a member in Chouzetsu Venom-chan 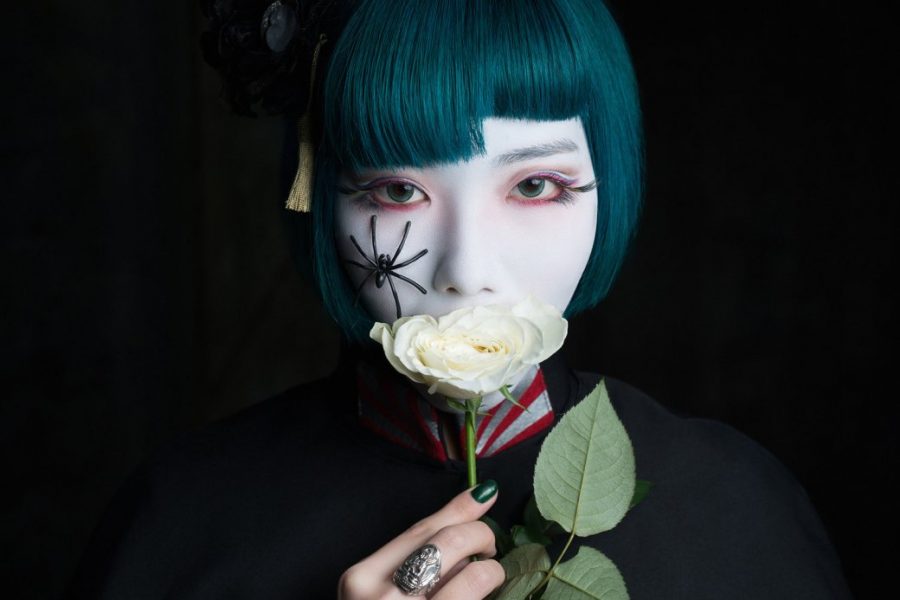 Sari Facts:
– Her member color is transparent.
– She was a part of the original lineup for NECRONOMIDOL, from 2014.
– She graduated on January 7th 2019 together with Yotsuyu Hina.
– Debuted as a solo idol on September 7th 2019 under the stage name SARI.
– She released her first solo single kyusai on April 1st 2020.
– Her nickname is Sari-chan
– She learned modern ballet between the ages of 6 and 14. (SARI official profile)
– She is the easiest identified member, with her green hair, white face, and spider on her cheek.
– She has never shown her face without her iconic makeup.
– Before she debuted, she went to underground dancing events and saw people in shironuri (white make-up). This inspired her to adapt the style herself when she was 16.
– Her title is Queen
– Her hobbies are excessive decoration, afternoon tea, and traveling alone.
Special Skills: Japanese painting, ceramics, shironuri, and tarot.
– She likes spiders.
– She decided to audition for NECRONOMIDOL when she saw the listing talking about abandoned buildings and ghosts.
– While she was active in NECRONOMIDOL, she helped with song writing and lyrics. 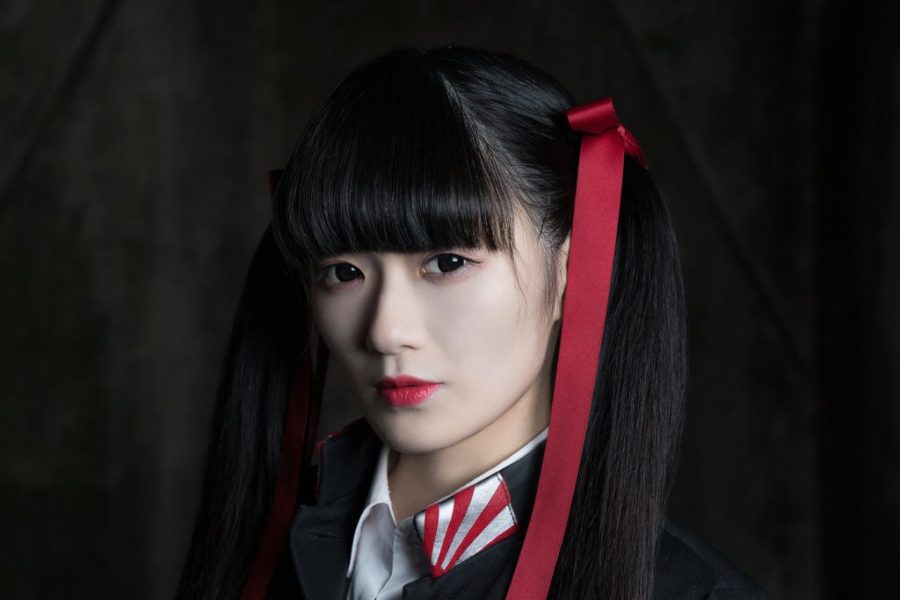 Yotsuyu Hina Facts:
– Her member color is blood.
– Joined NECRONOMIDOL on May 11th 2015 alongside Kusaka Karen.
– She graduated on January 7th 2019 together with Sari.
– Her title is Doll.
– Her nickname is Yotsuyu.
– Her hobby is cats.
– She was probably the most quiet member.
– She likes Harry Potter.
– Her favorite food is fruity food, especially fruity flavored cakes.
– She left NECRONOMIDOL to pursue schooling.
– After her graduation from NECRONOMIDOL, she cut her hair and became inactive on social media.
– She appeared at Rei, Risaki, and Michelle’s graduation ceremony and is now again active as an idol and a member of the group MANACLE. 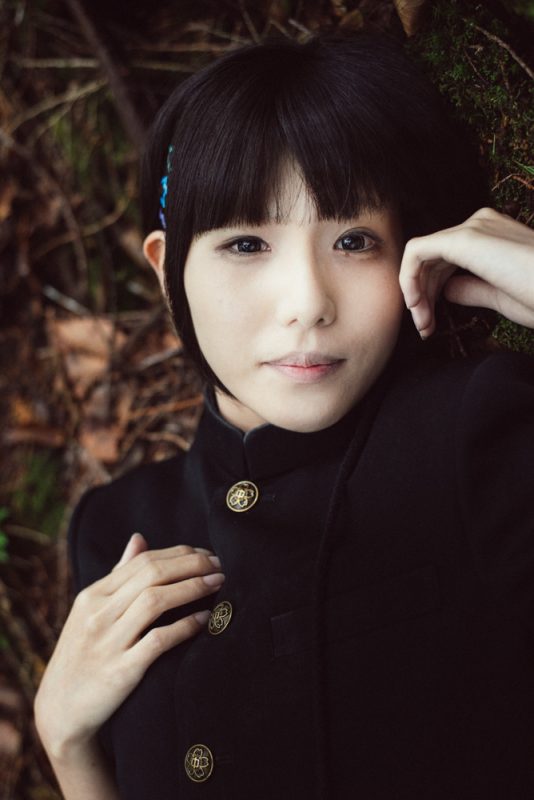 Tsukumo Hotaru Facts:
– Her member color is light purple.
– She joined NECRONOMIDOL on January 5th 2015.
– Her hobbies are collecting Garo-kei manga.
– She graduated November 29th 2016.
– She is no longer active in the entertainment industry. 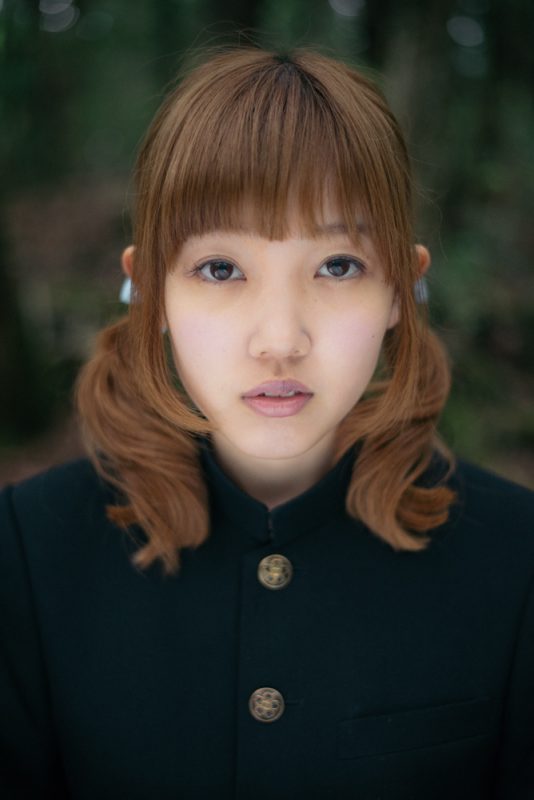 Kusaka Karen Facts:
– Her member color is dream.
– Joined NECRONOMIDOL on May 11th 2015 alongside Yotsuyu Hina.
– She graduated from NECRONOMIDOL on October 16th 2016.
– Her hobbies are singing, piano, and taking pictures.
– Her special skill is eating.
– She is no longer active in the entertainment industry. 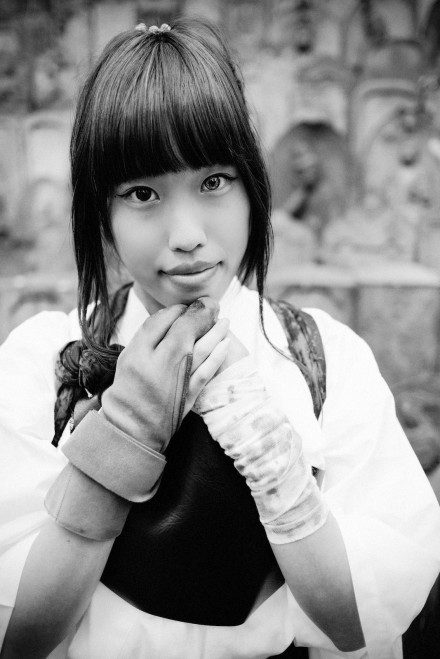 Tachibana Ruu Facts:
– Her member color is turquoise/teal.
– She was a part of the original lineup for NECRONOMIDOL, from 2014.
– She graduated from NECRONOMIDOL in April 2015.
– Her nickname is Ruuchan.
– Her hobbies are singing, writing, costumes, archery, and reading mushroom picture books
– She currently goes by the name Miyamoto Ruu (宮本琉生).
– After graduating from NECRONOMIDOL, she was briefly a member of 15GERM from 2018 to 2019, but had to withdraw due to health reasons. 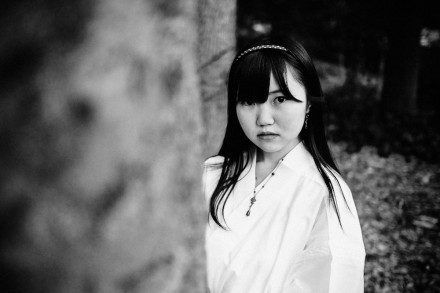 Henmi Sera Facts:
– She was a part of the original lineup for NECRONOMIDOL, from 2014.
– She is from Chiba prefecture, Japan
– Her member color is crimson.
– Her nicknames are Secchan and Serahi.
– She graduated from NECRONOMIDOL in January 2015 to pursue a different route as an idol.
– She joined RipukA -HOT HEAT HEAT- in March 2015 and graduated on April 30th 2017.
– Her hobbies are singing, writing, costumes, archery, and reading mushroom picture books
– Her favorite group is Juice=Juice.
– Skills: Seiyuu Otaku
– She has been inactive from the entertainment industry since she graduated from RipukA -HOT HEAT HEAT- in 2017.

Who is your favourite in NECRONOMIDOL?
Total Votes: 198
Voters: 121
×
You or your IP had already vote.

Who is your NECRONOMIDOL bias? Do you know more facts about them? Feel free to comment below. 🙂 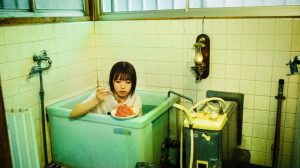 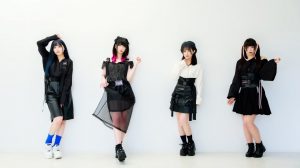 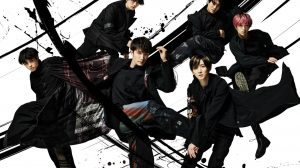 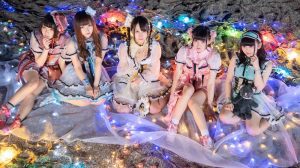 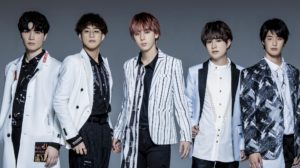 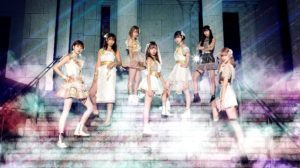 Poll: What is your favorite MONSTA X collaboration?