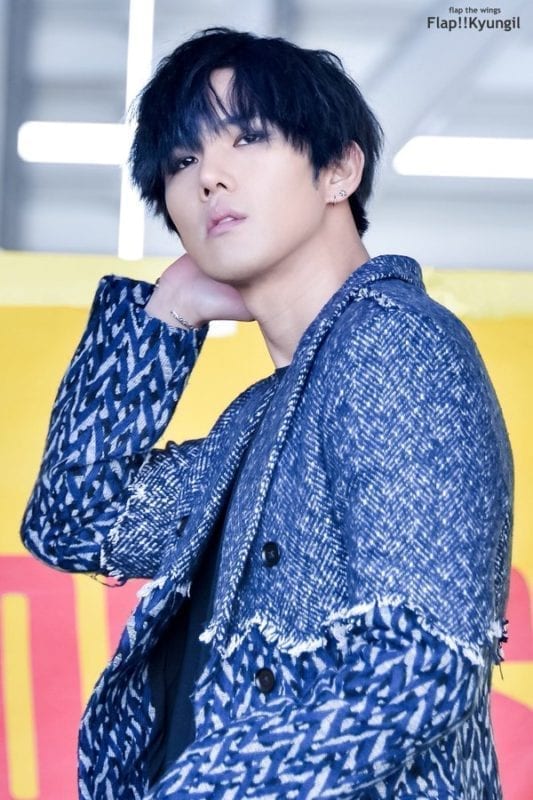 Kyungil facts:
– Family members : Father and Mother (he is the only son)
– Had a black cat.
– He once suggested the group name to be called “Queen”.
– There’s rumor around fans that he used to be one of YG trainee alongside BigBang members.
– Beside IU’s Beautiful Dancer, he also become IU’s dance partner for her 2011 SBS Inkigayo Cruel Fairy Tale.
– He likes to gather all member and staffs on backstage then shout “Fighting!” before they go to the stage.
– Got nickname “Song Leader” from fans because he takes good care of other members.
– He said that the reason he became History’s leader is because of his power (strength) and charisma.
– He is the strongest of all members so they called him “Hulk” and no one can beat him on arm wrestling.
– Because of 6 years gap between him and the youngest, he often act childish and immature but other members like him that way.
– He said that he wanted a cute brother like Yijeong.
– He like to cuddle Yijeong before sleep.
– He used to be the one who paid for the food when he and other members were going out together.
– Charming point : Little dot on his right side nose, his graceful dance and his muscular body (specially his so called tiger-claw muscle on each side of his body).
– Attractive moment : Seeing his body silhouette over a foggy bathroom mirror after taking a bath.
– He exercised 3-4 hours a day for 3 years to achieve his perfect abs.
– He doesn’t like to be called “six-pack idol” and rather choose to be called “late night snack-idol”
– Yijeong said that all the burgers and pizza Kyungil eats become his pack (Kyungil’s abs).
– IU said his abs is like a lobster.
– He want to sing duet with Justin Timberlake.
– He can do sexy gwiyomi.
– Favorite sport : Swimming, Bowling, Baseball, Basketball & Soccer.
– Favorite color : Black and White.
– Favorite outwear : Sleeveless-shirt/T-shirt, Jacket and Jeans (casual look)
– Loves to eat and can finish jajangmyoen in 20 seconds.
– His favorite food is meat.
– He loves driving in speed.
– He actually can cook (Yijeong said his cook is almost like a restaurant dish)
– Talking about being in a relationship with a girl, if there was a breakup then he’ll be the one who’d suffer the most.
– Over Japan LOST Showcase, Yijeong teased him and told everyone that ‘leader’ is Yijeong’s type but Kyungil said that he Likes Girls, then added he also likes someone who likes him.
– Kyungil’s fav dating place : Together watching movie on movie theater.
– What he wants to say to his future girlfriend : “Come quickly, I want to meet you.”
– Kyungil’s ideal type: Someone resemble to IU or Song Hye Kyo, a women that he can respect and look up to.

How much do you like Kyungil?
Total Votes: 1859
×
You or your IP had already vote.

Who’s the Kpop male idol with the best abs?