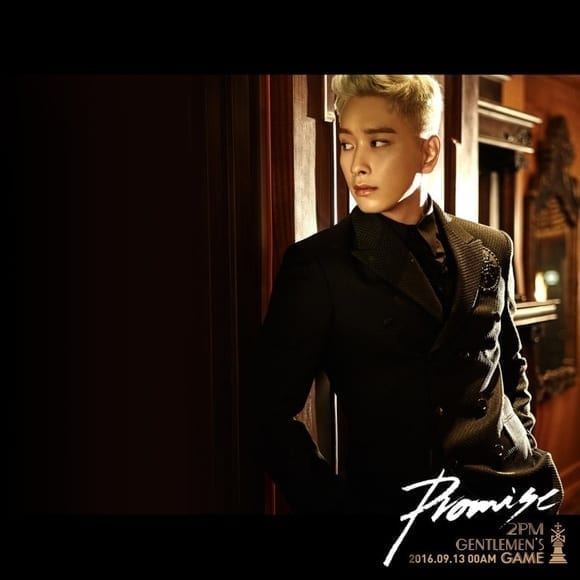 Chansung (찬성) is an actor, member of the South Korean boy group 2PM.

Chansung Facts:
– His hometown is Seoul, South Korea.
– He has an older brother.
– He attended Korean Art High School and Howon University.
– He gained his master’s degree in cinematography at Sejong University.
– His position in 2PM is Lead Rapper, Vocalist, and Maknae.
– He is under JYP Entertainment.
– He can speak Korean, intermediate Japanese, and basic English.
– His nicknames are Channana, Old Maknae (because he looks older than he is), Italian Maknae (due to his European-like appearance), General Hwang, Hwang Zeus, and Songga-yah.
– He practices Taekwondo and Kumdo, and has achieved high levels in both.
– Alongside Taecyeon and Junho, he was a contestant on JYP‘s “Superstar Survival”, but didn’t win.
– He acted in the music video for label mate Joo‘s song “Bad Guy“.
– Chansung would rather sleep on the floor than in a bed.
-Because he has a bigger build, many people do not believe he is the maknae of the group.
-He owns a fitness center with his weight trainer Hwang Mo. It is located in Nonhyun-dong, Seoul, SK.
– He has a cat named Jeonggam.
-His members say he has bizarre sleep habits, like sleep walking.
-He has the most ex-girlfriends out the the 2PM members.
-If he smells food, he will wake up right away.
-He enjoys reading books.
-He is friends with Doojoon of Beast/Highlight.
-He is the best drinker in the group, despite being the youngest.
-His hobbies are listening to music, gaming, and working out.
-His designated colors in 2PM promotions are black and purple.
-He admitted that during his pre-debut days we was tone-deaf.
-He is a member of the parody group Dirty Eyed Girls, with fellow 2PM members Taecyeon and Wooyoung, and 2AM members Seulong and Jo Kwon.
-His twitter username, 2pmagreement911, is based on the fact that his name means ‘agreement’.
-When he moved into his own apartment, he took the sofa from the 2PM dorm.
-He appeared in a Chinese remake of “We Got Married”, where he was paired with Chinese actress Liu Yan.
-He was a part of the main cast of “Law of The Jungle” in 2016.
– On June 11th, 2019 Chansung enlisted in the military and got discharged on January 5th, 2021.
– On December 15, 2021 Chansung announced marriage and fiancée’s pregnancy + to leave JYP Entertainment in January 2022.
– Chansung’s Ideal Type: “I don’t care about age although there are a lot of older women who treat me as a younger brother. Women who carry their own style are charming.”

How Much Do You Like Chansung?
Total Votes: 594
×
You or your IP had already vote.