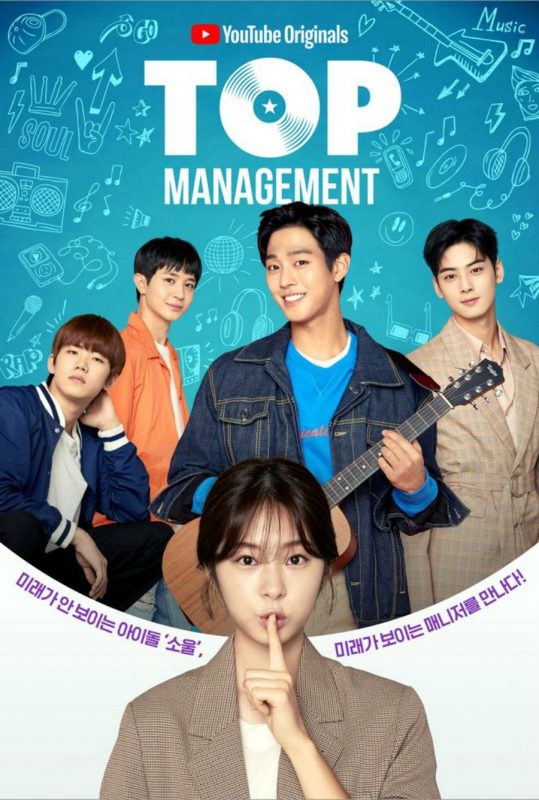 Being an idol seems so amazing. Thousands of adoring fans. The admiration and respect they recieve for their singing and dancing. All of it seems perfect…a little too perfect, perhaps!

S.O.U.L is a boy band with thousands of adoring fans, managed by Starlight Entertainment. They have a successful debut under their belt, and it seems nothing can go wrong for them; until, an accident on stage,accompanied by  accusations about plagiarism leads to the group’s downfall.

The complexity of human emotions is seen in this drama , as it revolves around a very realistic situation in the K-POP world, which is not entirely full of glitz and glamour as it may seem.

In steps, Eun-sung, a former female idol trainee with the power to predict the future, who becomes the manager of the aspiring, but struggling, male idol group “S.O.U.L.”, now complete with a new member by the name of Hyun Soo-yong.

DRAMA REVIEW –
This drama has become one of my all-time favourites simply because of how realistic this drama is. Not only do we get to see the emotional struggle that goes on in the mind of a K-POP star, we also realise that the smiling and shining facade that we see on the stage is not what is always visible in the mind of a K-POP star. Instead of laughter and happiness, there is fear and frustration on their faces for there is always a chance that it’s the last day they might spend on the stage. Forced to meet certain standards constantly, it is practically impossible for any idol to keep a genuine smile on their faces for long or is it?

In our youth, mistakes ruin a lot of the special moments we remember and we become the victims of certain embarrasing situations, be it because of our naivety, or even our arrogance itself could have been the trigger. We also end up hurting not just ourselves, but also the ones around us. Such a story is no different for a star who has just stepped into the spotlight.

Have we ever as fans thought about the kind of strength and resilience those few stars show? Amongst the millions of stars that fill the sky, some shine brighter while some simply fade away. This is the painful reality for any who work in the field of entertainment.

However, having said that,a few shortcomings that this drama has are – one being that the ending somehow leaves people at a cliffhanger, which might frustrate a lot of viewers, as no sequel has been released for this particular drama, and secondly, the development of a love story between a star who has just debuted and a group’s manager is highly unlikely, considering that ones new to the limelight often don’t have time to lead a proper social life, let alone think of love and confess to the one they so admire.

With all that said and done, this drama is truly an entertaining one, therefore, my advice would be: –

Buckle up, sit back and enjoy this drama filled with cringey scenes, romance, drama and a hint of humour to spice it all up; as well as watch Eun-sung struggle to find her place in the world of K-POP, and how she learns that her foresight could be her biggest blessing, instead of a said “curse”.

Do you like the Drama Top Management?
Total Votes: 241
×
You or your IP had already vote.