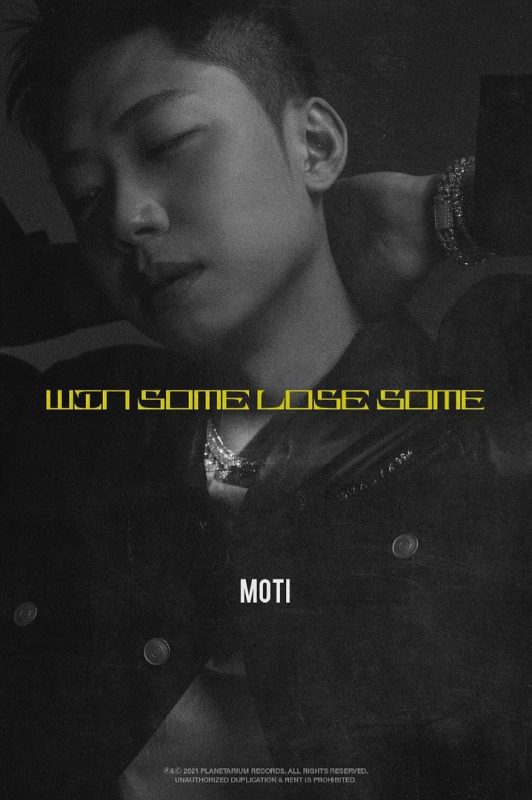 Moti (모티) is a South Korean rapper, songwriter, and composer under Planetarium Records.

Moti Facts:
– His hobby is playing games like League of Legends and it’s his only hobby.
– In his third year of high school he saw a sign “Motivator” and wanted to use it as his stage name. But it sounds too harsh so he just took the first three letters.
– His stage name stands for motivating people.
– He finds his current stage name too cute now but he doesn’t consider changing it.
– He spends every summer/winter vacation in San Francisco.
– He visited Singapore.
– He has two toy poodle dogs.
– He has a tattoo sleeve on his left arm.
– Since the first year of high school he wanted to be a rapper but his parents were very against it. That’s why he stuck to studying and after graduating he started pursuing music.
– He decided to become a rapper because of his favorite artist’s Beenzino album “24:26”
– He is usually shy and isn’t the type of person that walks up to someone and strikes a conversation.
– He got to join Planetarium Records thanks to his friend.
– As of April 2021, he never had a big birthday party. He simply spends it with friends drinking soju.
– His favorite alcohol is soju and he can drink up to 2 bottles.
– According to him, he debuted on January 3, 2018, with EP “PLANETARIUM CASE#1” that consists of tracks by all Planetarium Records artists. He released his first solo single on July 9, 2018.
– He thinks he is pathetic when playing LOL.
– He is good at swimming.
– His nickname is “Jo Moti” a mix of his last name and stage name.
– His three charms are height, voice, and big heart with a lot of love.
– An artist he’d love to work with is Beenzino.
– Three things that he can live without are a phone, computer, and his dogs.
– He is a loner and has a song about it.
– He collaborated with artists like Mckdaddy, CAMO, Villain, June, Gaho.
– He is probably the first artist according to Ashley that used autotune while singing live on Sound K in 2021.
– He is a part of a collaboration project called PLT, formed from Planetarium Record‘s soloists in 2018.
– He doesn’t like bananas.
– He treats all his songs like they’re his babies.
– He didn’t have a hard time while making EP Win Some Lose Some.
– His favorite song from EP Win Some Lose Some is “Loner”.
– The least amount of effort took him to make “Loner” and the most “Ash” and “Whenever” songs from EP Win Some Lose Some.
– He doesn’t write a diary.
– His tip for writing lyrics is to stay bold with your emotions.
– His inspiration for writing the song “Ash” was from heartbreak with his ex-girlfriend.
– His company reached out to CAMO for a featuring on his EP Win Some Lose Some.
– He follows Robert Downey Jr. on Instagram.
– He was a part of r&b crew “Alphadict” along with the rest of the members of PLT. The crew doesn’t exist anymore.
– In general, he gets inspiration from personal relationships.
– He is very bad with moving his body so would never dance.
– He met Mckdaddy when he filmed Moti’s music video. They’re close since then.
– He rewards himself after releasing music. With the release of “Win Some Lose Some” he was drinking every day.

How much do you like Moti?
Total Votes: 23
×
You or your IP had already vote.