Min Hyorin Facts:
– Birthplace: Daegu, South Korea.
– Family: Parents, two older siblings (one brother, one sister)
– She adopted the stage name Min Hyorin and started working as a model in 2006.
– Hobbies: Watching movies. She also likes dancing and she’s talented at it.
– She has starred in several music videos for groups and artists such as; F.T. Island, Park Kiyoung, Evan (Click B), Mighty Mouth, Jo Sungmo, Song Jieun (ex-SECRET), Taeyang (Big Bang), Junho (2PM), Unnies.
– She is also a singer. She has released a studio album and a single back in 2007-2008.
– She made her acting debut under JYP Entertainment back in 2009.
– She has a pointy nose and a doll-like appearance, a common symbol of western beauty.
– She was falsely known for having had plastic surgery in her nose. Min Hyorin sued the plastic surgeon who started this fake rumor about her and supported that she has only had eye surgery and gotten her teeth laminated.
– As a model and a celebrity she likes to keep her make up simple and natural.
– In March 2017, her contract with JYP ended and she has since signed to Plum Entertainment.
– On February 3, 2018, she married longterm partner soloist and Big Bang member Taeyang.
– On September 27, 2021, it was confirmed she and Taeyang are currently expecting their first child together.
– On December 6, 2021, it was reported that the star couple had recently welcomed a healthy baby boy.
– Min Hyorin’s ideal type: “My ideal type is a family man. I like being casual, so I like casual guys aswell. I think we’ll have lots to share. Guys that are warm & sophisticated”

Which is your favorite Min Hyorin role? Do you know more facts about her? Feel free to comment below. 🙂 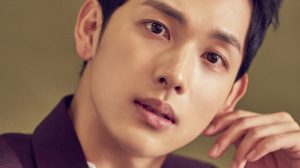