Lia Facts:
– Her hometown is Incheon, South Korea.
– Family: Parents (her mom is her role model), younger brother.
– Education: Incheon Sinsong Elementary School (graduated), Shinsong Middle School (transferred), Northern College Eight School Jeju (transferred), Shinsong Middle School (graduated) & Seoul Performing Arts High School – department of Practical Music (SOPA / graduated)
– Her stage name originates from her English name “Julia” given to her by her aunt.
– Nicknames: Honey Lia, Cinnamon Lia, Ariana Grande.
– On January 20, 2019, it was announced that she would be joining JYP’s new girl group. She debuted as a member of ITZY on February 12 of the same year after having been a trainee for more than two years overall. She is the newest JYP Entertainment trainee to debut under the company.
– She almost became a SM Entertainment trainee (she passed the audition but never signed).
– She used to live in Toronto, Canada.
– She can speak Korean and English.
– Her Chinese zodiac sign is Dragon.
– Favorite color: Baby blue.
– Hobbies: Shopping, listening to music.
– Her and Jisu from TO1 share the same birth name.
– She was born on the same day as Everglow‘s Aisha.
– She was vocally trained at Dream Vocal Academy.
– An ITZY member she feels the most comfortable with is Chaeryeong.
– Likes: Fruits, pasta, Korean and Western food.
– During a quick tumblr Q&A with Yeji, she implied/confirmed she is a MARVEL fan. (She noted that Yeji wasn’t as familiar with the MARVEL characters and explained the figures quickly to Yeji, who also chose Iron Man.) In the vLive when they mentioned their English names they chose for each other, Lia brought up Avengers: Endgame.
– Fans support she looks like a mix of Blackpink‘s Jisoo and Red Velvet‘s Irene.
– Lia has a puppy named Bella.
– In the old dorm, Lia and Yuna were roommates.
– Update: For the new dorm arrangement please check ITZY‘s profile.

Do you like Lia? Do you know more facts about her? Feel free to comment below. Let’s complete this profile together time by time. 🙂 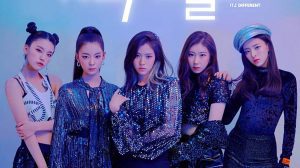 Poll: What Is Your Favourite ITZY Single/Album?