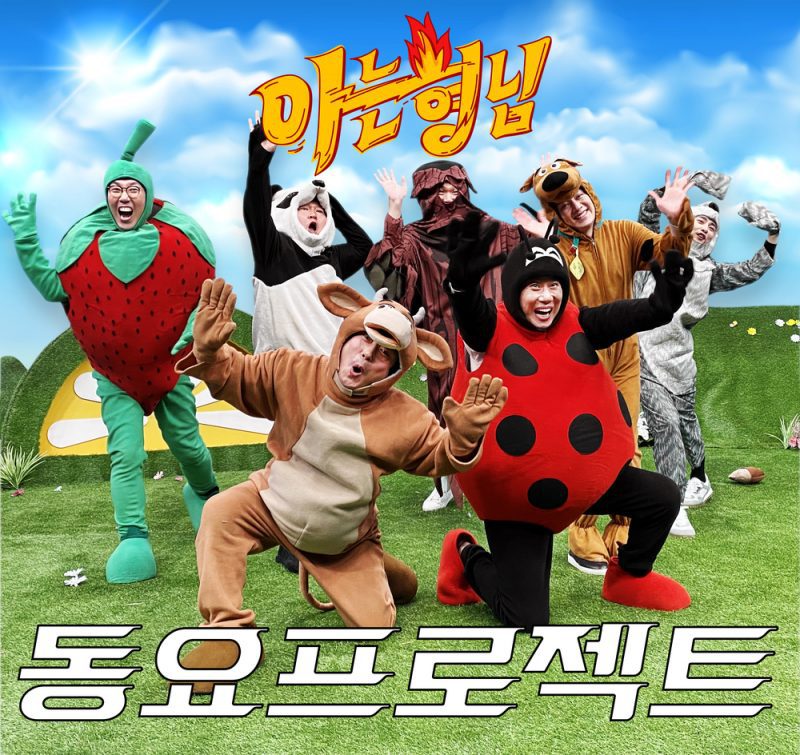 Knowing bros Children’s song Project (아는형님 동요 프로젝트) was a collaboration children’s song project between “Knowing bros” and “Highlight” in May of Family Month under INNEXTTREND. It was aired in ep.279 of “Knowing bros” as their group project of 2021. Consisted of Kang Ho Dong, Kim Hee Chul, Kim Young Chul, Seo Jang Hoon, Lee Soo Geun, Min Kyung Hoon, and Lee Sang Min for “SsakSsakYi” and Lee Soo Geun, Dongwoon, Doojoon, Gikwang, Yoseob, and Kim Yu Ju for “Don’t Be In Pain”. SsakSsakYi members met every week at 9 pm. On May 8, 2021, they released their songs titled “SsakSsakYi” and “Don’t Be In Pain”. 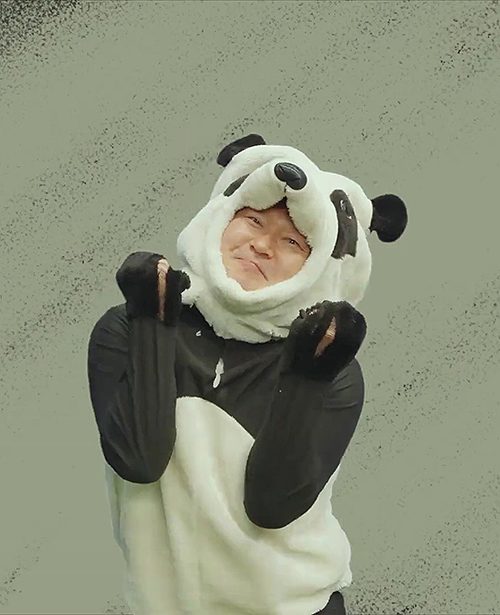 Kang Ho Dong Facts:
– He sang the first part.
– He wrote lyrics about life wisdom with narration. A song about the proverbs of Brother School.
– He liked the lyrics of the song to be his own.
– Lee Sang Min picked that he will rap but Ho Dong was against it because he is a melodic singer.
– He told Sang Min how to sing nasally.
– He had difficulties during the recording. That’s when the other members started joking around that he will take 40 minutes out of an hour of recording (Jang Hoon) and with every 5 minutes they’ll start depleting the air in the recording booth (Soo Geun). In the end, they mentioned that he had to feel the pressure to do well.
– He recorded 7 signature phrases in 30 seconds.
– He was the sixth one to be eliminated as a Thorough Fairy because he covered his mouth and touched his nose. Eventually got picked because Yeo Esther was impressed by his health despite his age.
– He exercises maybe once every two days.
– He sleeps 8 hours a day on average.
– He was against sleeping pills because it gets you addicted psychologically.
– Roles in the music video: Thorough Fairy and panda.
Go to Kang Ho Dong Profile… 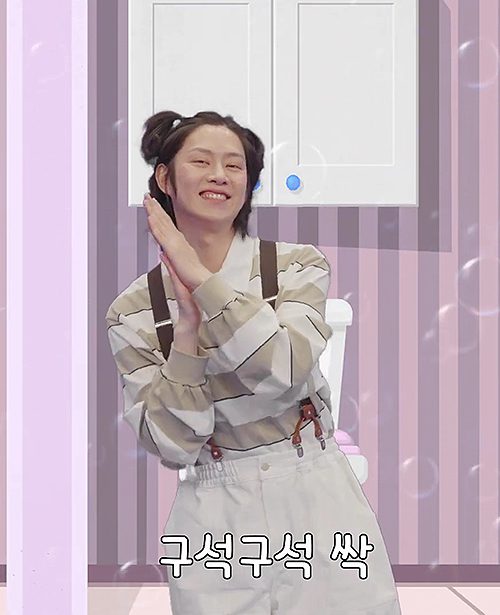 Kim Hee Chul Facts:
– He sang the second part.
– He wrote lyrics about traffic safety.
– He liked the lyrics to be picked between “Road Safety” (his own) and “Thoroughly, thoroughly” (Jang Hoon).
– Sang Min recommending him to sound as cheery as possible.
– The “싹싹싹” part was harder for him to pronounce than he thought.
– During the recording he warmed up with a Kim Jung Min imitation.
– He was the fourth one to be eliminated as a Thorough Fairy because he kept dancing around while touching the chairs.
– He was in a car accident that caused him to have his left leg totally broken. He survived because he was wearing a seatbelt.
– Yeo Esther pointed out that he looks weak.
– He has frequent mood swings.
– Roles in the music video: older sister, a friend, and a dog.
Go to Kim Hee Chul Profile… 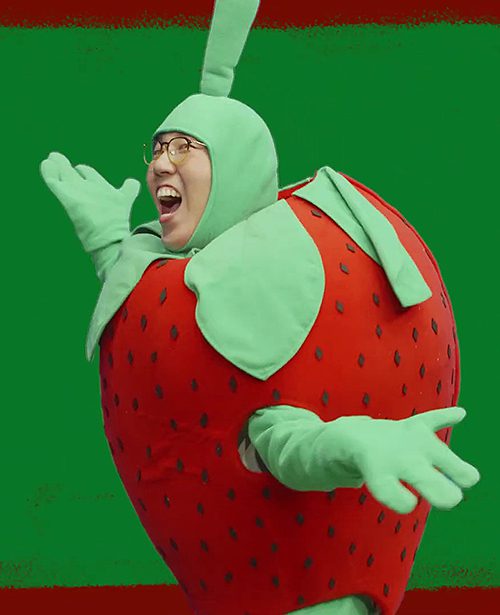 
Kim Young Chul Facts:
– He sang the third part.
– He wrote lyrics about dreams titled “Our Dreams” (우리의 꿈).
– He liked the lyrics to be picked between “Our Dreams” (his own) and “Game Song” (Kyung Hoon).
– He was asked by Sang Min to be as upbeat as possible so it’s fitting for children.
– Jang Hoon complemented his high notes as they sounded really stable.
– He was the third one to be eliminated as a Thorough Fairy because he kept touching things and putting his hands on others’ shoulders.
– He has high cholesterol.
– Roles in the music video: mom, grandma, Germ Man, and a starwberry.
Go to Kim Young Chul Profile… 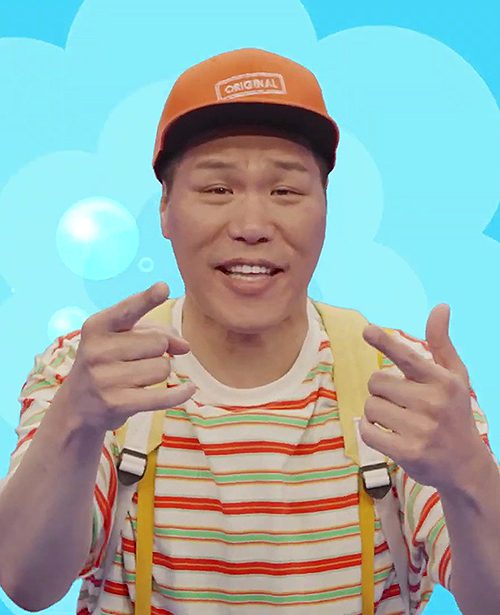 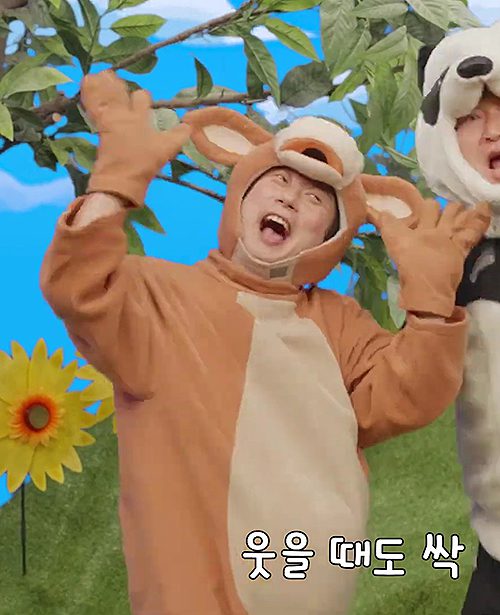 Lee Soo Geun Facts:
– He sang the fifth part.
– He made a track 2 out of two that were chosen to get picked out of with very unique lyrics. It lost with 2 votes against Sang Min but got a chance to get recorded by Highlight and even release a music video with him as the main character.
– He wrote lyrics about a COVID-19 themed story “The hill where we played is gone. The wind ignores me. The flowers smile and don’t greet me. I hope the sun makes everyone smile. I hope the moon makes everything bright. I want to join my hands in prayer tonight to wish that no one will be in pain.” He compared it to the “Island Baby” song from the past after everyone pointed out it sounds sad.
– He liked the lyrics to be picked between”Thoroughly, thoroughly” (Jang Hoon) and “Road Safety” (Hee Chul).
– He was told by Ho Dong to put more feelings into his singing.
– He was the fifth one to be eliminated as a Thorough Fairy because he touched his lips that is a habit of his.
– His uric acid level is a bit high (usually over 10).
– Roles in the music video: teacher and a cow. 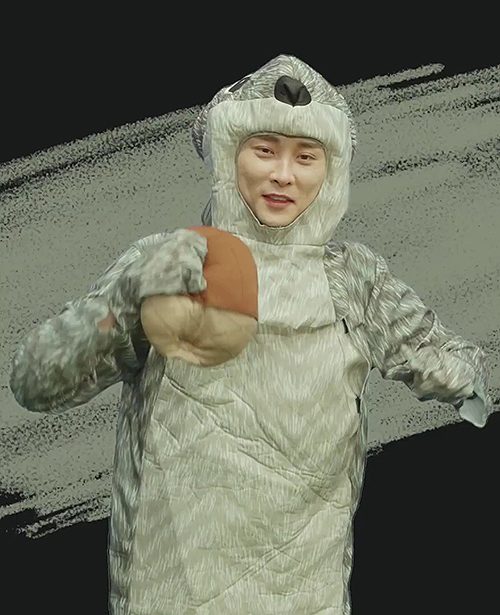 Min Kyung Hoon Facts:
– He sang the sixth part.
– He wrote lyrics about playing, “freeze, freeze, freeze If you move, then bang, you lose. I’m the sheriff and I’ll protect my town. 1, 2, 3 bang! Shall I give you a taste? If you sleep in I’ll bang. If you cut in line, it’s bang! 1, 2, 3, bang! All of us together, shh! Heart pounding, whoosh. From now on, you’re the sheriff.”
– He liked the lyrics to be picked between “Game Song” (his own) and “Don’t Be In Pain” (Soo Geun).
– Sang Min pointed out that he was breathing too much while singing what made him lose the emphasis on the “ㅅ” part.
– As he had difficulties with pronunciation they changed “bright world” to “bright day”. Thanks to that he did it on the first try with “bright day”.
– Yeo Esther told him to use lip balm for his dry lips as she noticed he keeps picking them.
– He was the first one to be eliminated as a Thorough Fairy because he often touches his lips with hands that are full of germs.
– He suffers from back pain. Yeo Esther noticed that he has a bad posture and should never do sit-ups as they can hurt his back.
– He likes camping so he carries over 10kg on his back.
– Roles in the music video: an older brother and a squirrel.
Go to Min Kyung Hoon Profile… 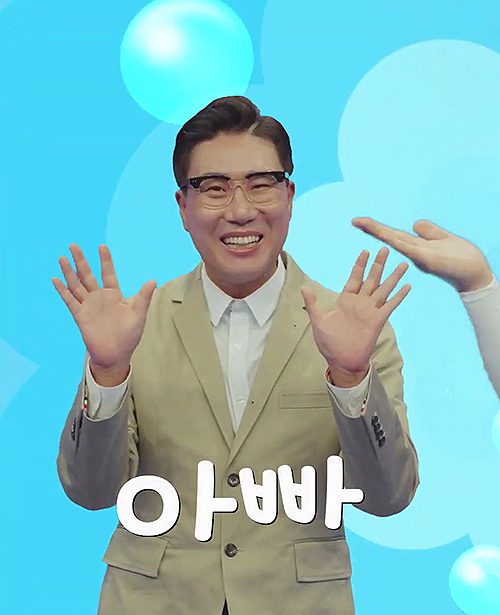 Lee Sang Min Facts:
– He sang the seventh part.
– He made a track 1 out of two that were chosen to get picked out of. It was full of children’s feelings and won with 5 votes against Soo Geun.
– He liked the lyrics to be picked between”Game Song” (Kyung Hoon) and “Thoroughly, thoroughly” (Jang Hoon).
– He was in charge of production.
– Since 2014, he suffers from panic disorder and has been taking medicine for it.
– He was the second one to be eliminated as a Thorough Fairy because of taking off his glasses and putting them back on.
– A thing he’d like to say to people with panic disorder is to take medication.
– Roles in the music video: dad, grandpa, Germ Man, and a ladybug. 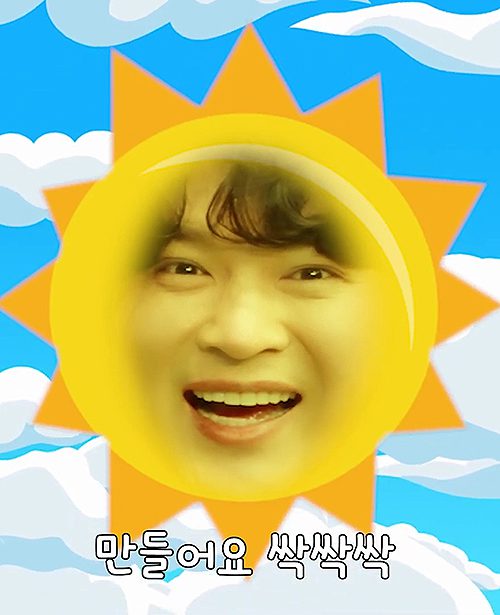 Senior Dong Facts:
– He came up with the concept for the music video to be about everyone becoming like a Thorough Fairy.
– For the first verse they had to shoot individual photoshoots for their own characters, after that a drama scene where the Thorough Fairy saves children from Germ Men. The second verse contained bright scenes with friends on the hill (Teletubbies garden), ending with a group dance.
– He made everyone do a freestyle dance for their individual characters.
– Senior Dong made “Thoroughly Thoroughly” choreography himself.
– He got a cameo role as a sun in the music video.
– He was also in charge of the “Don’t Be In Pain” Music Video.
Go to Shin Dong Hee Profile… 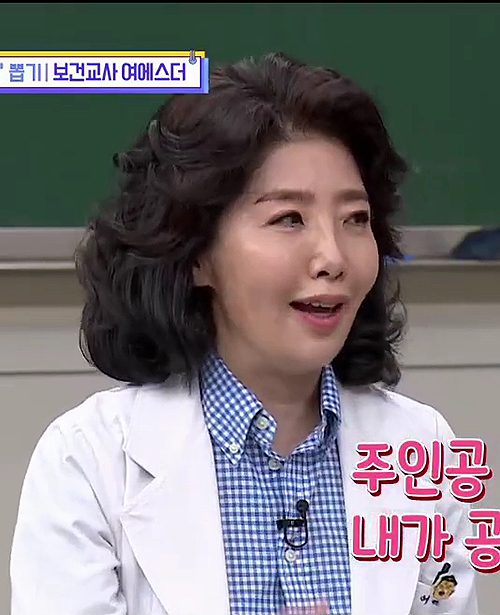 Yeo Esther Facts:
– She’s multipotent.
– Her nickname in school was “the walking dictionary”.
– She was invited by Senior Dong to determine who is the best man for the Thorough Fairy position.
– She eliminated everyone from the Thorough Fairy position because it is very important not to touch your face.
– She gave the members’ health checkups.
– She goes to the same hair salon as Ho Dong.
– Kyung Hoon revealed to really like her and watch all her shows.
– She has mistaken Soo Geun with Kim Byung Man.
– It was pointed out by other members that she favors Ho Dong.
– She told everyone that they need to keep drinking water so their mucous membranes stay moist.
– By accident, she was writing Hee Chul examination in Soo Geun‘s chart.
– She showed Jang Hoon that the most germs are around your nail.
– She really likes “Coward” and “Thorn” songs by Kyung Hoon.
– She had a hard time picking between Ho Dong and Jang Hoon to be a Thorough Fairy.
– She’s clumsy.

Don’t Be In Pain Members Profile: 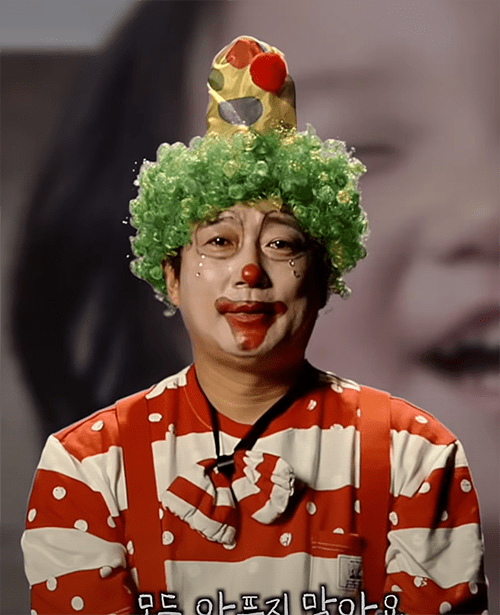 Lee Soo Geun Facts:
– He submitted a high-quality children’s song titled “Don’t Be In Pain” that suits the era about COVID-19 but only got 2 votes. Everyone thought no one will ever think about it gain but during the episode of “Knowing Bros” with Highlight members, Min Kyung Hoon encouraged Soo Geun to ask the members if they’d like to work on this song.
– He said that all the profits from the release of “Don’t Be In Pain” will be donated for a good cause.
– He made sure that Highlight members will understand the lyrics.
– He said that if any of the members don’t like the lyrics they can change it and is open to suggestions.
– He can play the guitar. 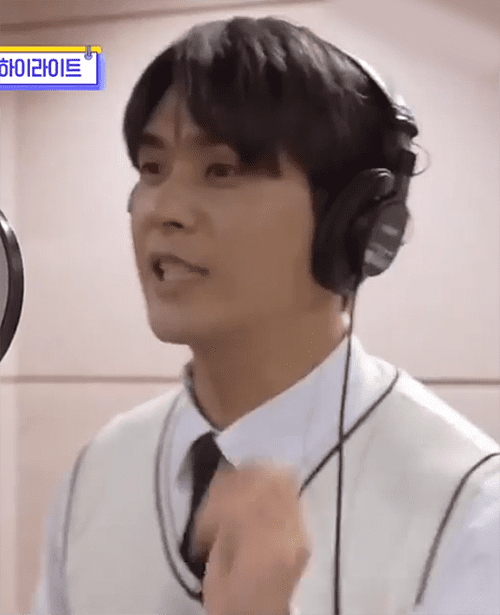 
Dongwoon Facts:
– He is a Highlight member.
– He said that the lyrics made his heartache.
– He came up with the idea of adding a monologue.
– Gikwang said that he is a “prince of singing” so Soo Geun doesn’t have to worry. 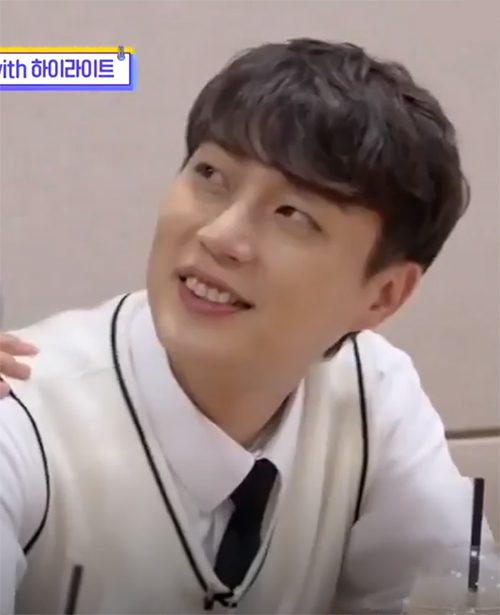 Doojoon Facts:
– He is a Highlight member.
– He was told by Soo Geun to sing more energetically.
– Soo Geun didn’t like that he had his arms crossed while recording.
– Soo Geun compared his vocals to Kim Chang Wan.
Go to Doojoon fun facts… 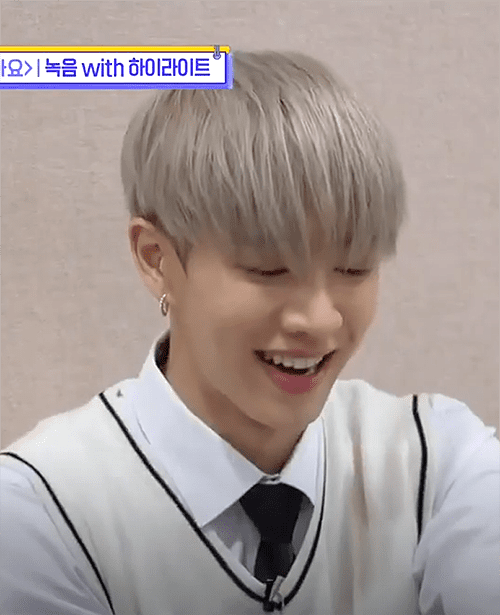 Gikwang Facts:
– He is a Highlight member.
Go to Gikwang Profile… 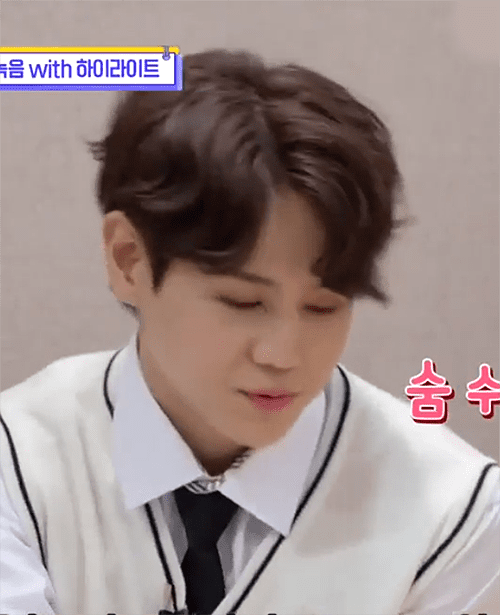 Yoseob Facts:
– He is a Highlight member.
– He was in charge of adding harmony to the song. 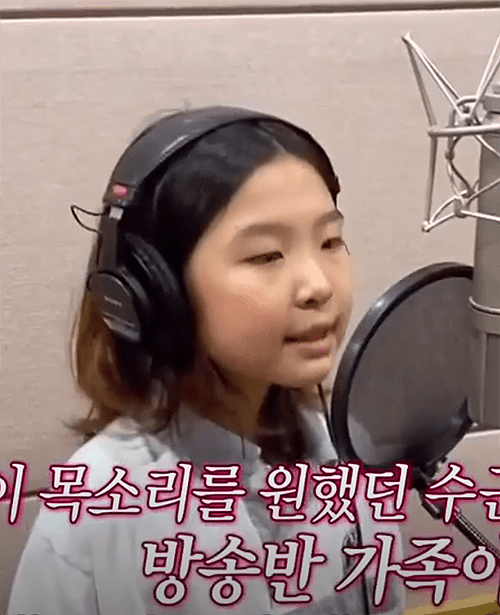 Kim Yu Ju Facts:
– She participated because Soo Geun wanted the sound of children to be used in the song.
– She is from a family of a staff member.

Which Knowing bros Children's song is your favorite?
Total Votes: 68
×
You or your IP had already vote.

Don’t Be In Pain Song:

What do you think about Knowing bros Children’s song Project? Feel free to comment below. 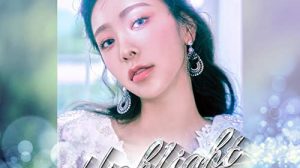 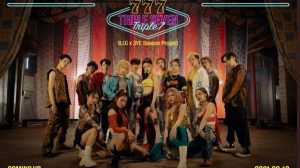