Min Woo-Hyuk Facts:
– Born in Seoul, South Korea.
– On November 11, 2012 he got married to LPG‘s former member Lee Se-mi.
– He has two children. The eldest son named Eden.
– In 2013 he acted in his first musical titled “The March of Youth” where he was an actor who replaces the main actor in his absence.
– He used to be an actor under Yuleum Entertainment before joining CURO CULTURE in 2018.
– For him, love is about only living for a significant other.
– His favorite character in Anna Karenina is Levin.
– Musical he’d love to play again in is “Les Misérables”.
– A musical song that he sang the most is “In Your Dream” from “Frankenstein”, at weddings and other events.
– For a honeymoon, he traveled with his wife to Hawaii.
– His most memorable accidents on stage are showing underwear, unzipped and ripped pants. Also, the lights going off while performing.
– He relieves his stress by performing.
– He drinks a lot of water.
– He enjoys girl group performances.
– His wife had a miscarriage with his first-second child.
– He wants to be an actor who can do everything in various fields.
– He likes to stay active even when he has time to rest.
– He gained confidence as a musical actor through “Frankenstein”.
– His career began as a model, becoming a singer shortly after and then moved on to become a musical actor.
– When he was a model he lost 20kg in a month because he was told to do so.
– He lives together with his wife, son, parents, and grandmother (As of 2017).
– One of the biggest reasons he wanted to participate in “Frankenstein” was to make his own Victor – interpret the character that was already loved by the audience, showing it in a different light.
– When he was in his 20s and 30s he wanted time to go faster, so he could run away from current reality and be old where he doesn’t have to worry about money and suffer as he did during that time.
– He studies his scripts to understand the character he has to portrait: its personality, motives, etc.
– In the past, when he was auditioning, he focused on doing his best to get the role somehow. He tried to appeal to the judges without hiding that this actor was in desperate need and ready to work hard. Now he prefers to show that he has a character he is auditioning for, inside of him.
– He is friends with comedian Kim Jae-Dong, singers Da One, Na Yoon-Kown, and Ko Yoo-Jin.
– His former manager used physical violence on him, making him suffer from concussions and being hospitalized 7 times over the years. He was left with bruises and cuts on his face. He didn’t try to fight back because he didn’t want his parents to know he’s struggling this much to purse his dream his father didn’t approve of in the first place.
– His goal is to not only work in musicals but also record music, and to do activities in movies and dramas.
– He started playing baseball at 10 years old since his dad loved this sport so he wasn’t allowed to do anything else.
– In the second year of high school, he had an ankle injury, making him stop playing baseball for two years.
– When he went to college he was asked to practice with a professional baseball team, that’s when he realized he doesn’t want to follow his father’s dream but his own about becoming a singer.
– Despite wanting to become a singer he was giving up that dream and focusing on baseball because he didn’t want to disappoint his father. After an ankle injury, he finally had a chance to pursue his dream and promised his father to success so he wouldn’t feel a loss of his son not joining baseball pro league.
– His singing career started by street casting when he was noticed in the karaoke room and offered to make a song.
– With his first agency, he signed a wrong contract, leaving him in debt without releasing an album and transferring to another agency. That made him feel like a puppet and not a human being.
– After being discharged from the military his friend encouraged him to try musical and that’s how his career in this field started.
– Ideal Type: N/A

How much do you like Min Woo-Hyuk?
Total Votes: 352
×
You or your IP had already vote.

Do you like Min Woo-Hyuk? Do you know more facts about him? Feel free to comment down below.😊 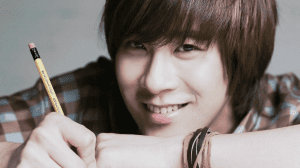 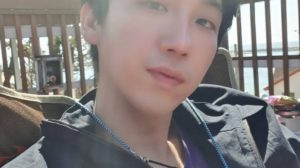 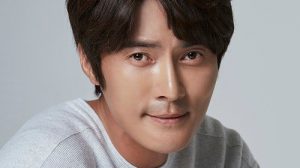