Mama the Idol Profile and Facts 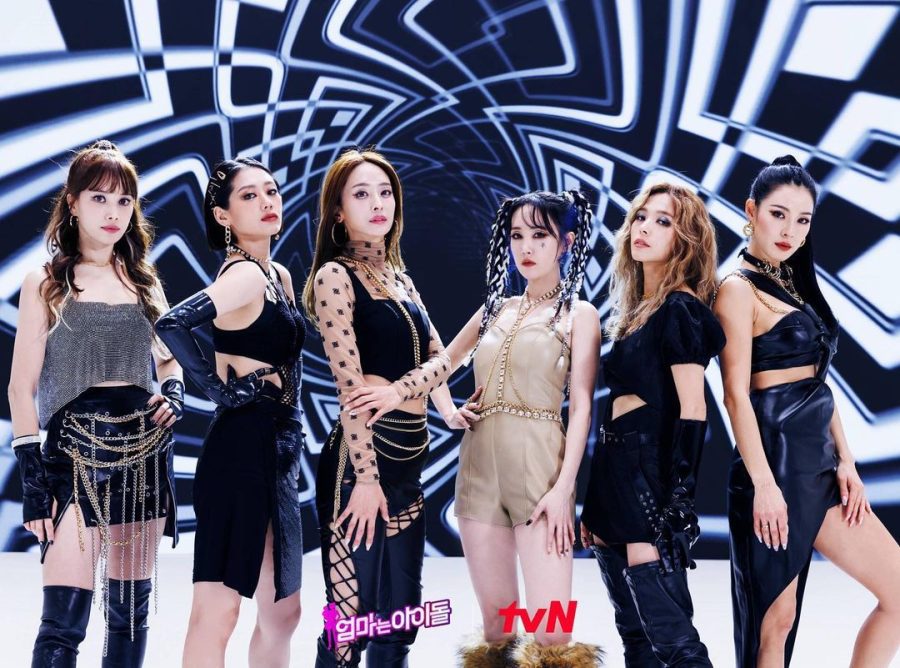 Mamadol (M.M.D/마마돌) is a 6 member comeback project group under CJENM of moms who were stars but had to leave the entertainment industry due to childbirth and childcare. The group was made through the TvN reality show Mama the Idol. In order for this group to debut, the team of six women had to gather 2,000 fan club members and 20,000 followers on social media while also having to go through various vocal and dance performance missions in order to prove that they can still be idols. The group consists of: Sunye (ex-Wonder Girls), Kahi (ex-After School), Jungah (ex-Jewelry), Yang Eunji (ex-Baby V.O.X Re.V), Byul (soloist) and Hyun Jyuni (actress). They debuted on January 27th with the song WooAh Hip. 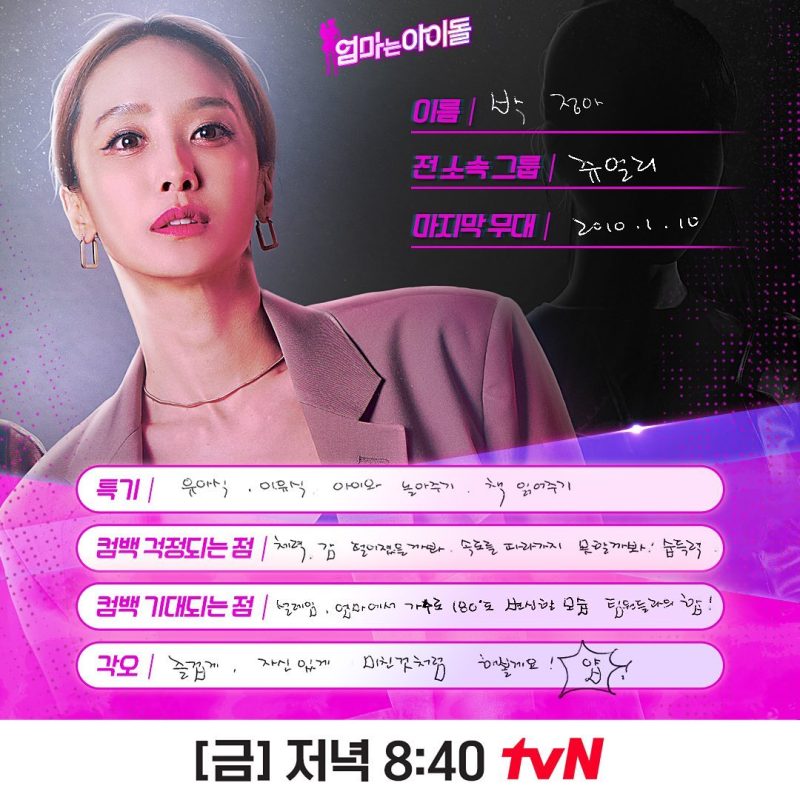 Jungah Facts:
– She was born in Yeongcheon, North Gyeongsang Province, South Korea.
– She is a former member of Jewelry.
– She married pro-golfer Jeon Sang-woo on May 16, 2016.
– She has one daughter, Ahyoon.
– Her nicknames are Black Chicken and Casper.
– Her hobbies are hiking, listening to music and playing the piano.
– Her favorite colors are white and blue.
– Her favorite foods are kalbi and kimchi.
-Her favorite artists are Jaurim, Christina Aguilera and Mariah Carey.
– Education: Seoul Galhyeon Elementary School, Seonjeong Middle School, Dongmyeong Girls’ Information Industry High School, Dongduk Women’s University (majored in Practical Music).
– She is an Atheist.
– She released her solo debut album, Yeah, in 2006 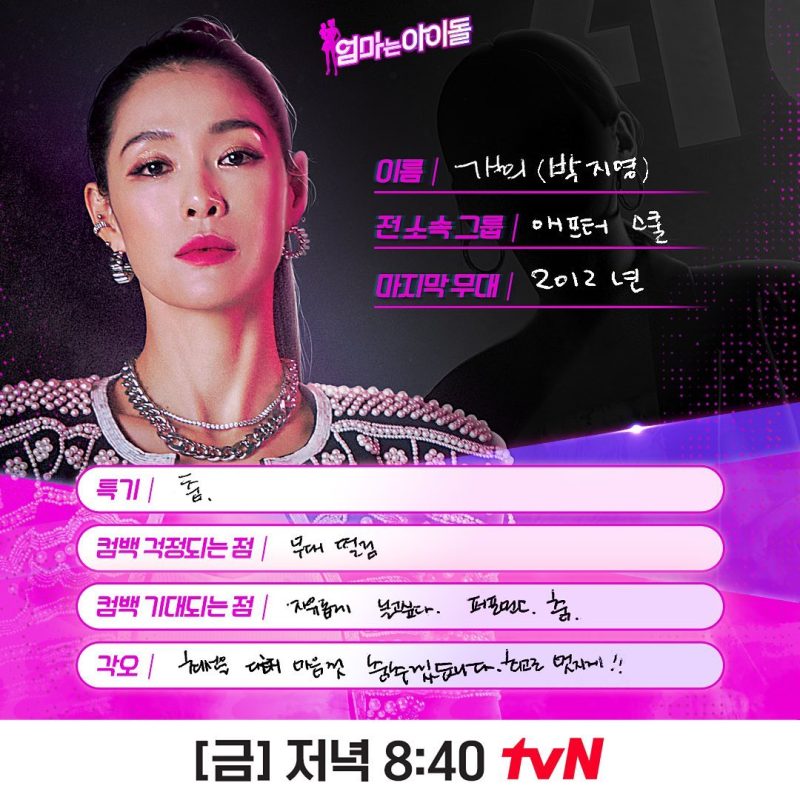 Kahi Facts:
– She was born in Daegu, Gyeongsangbukdo, South Korea.
– She is a former member of After School, S.Blush and a professional dancer.
– She is Protestant.
– In 2016 she married Yang Joon Moo, chief of Incase Korea.
– She has two children: Noah and Shion.
– She was a dance trainer for Produce 101 and Produce 101 Season 2.
– She was raised by her grandfather and grandmother.
– Education: Sunae High School, Seokyeong University (majoring in Acting and Theater).
– From 2000-2006 she was a famous back-up dancer for BoA, JinuSean, 1TYM, Lexy, DJ DOC, Chaeyeon, Eun Ji Won and more.
– She wrote the rap lyrics for Suki’s “One Love” and the lyrics for After School’s “When I Fall”, “Let’s Do It”, “With U” and “Someone Is You”.
Show more Kahi fun facts… 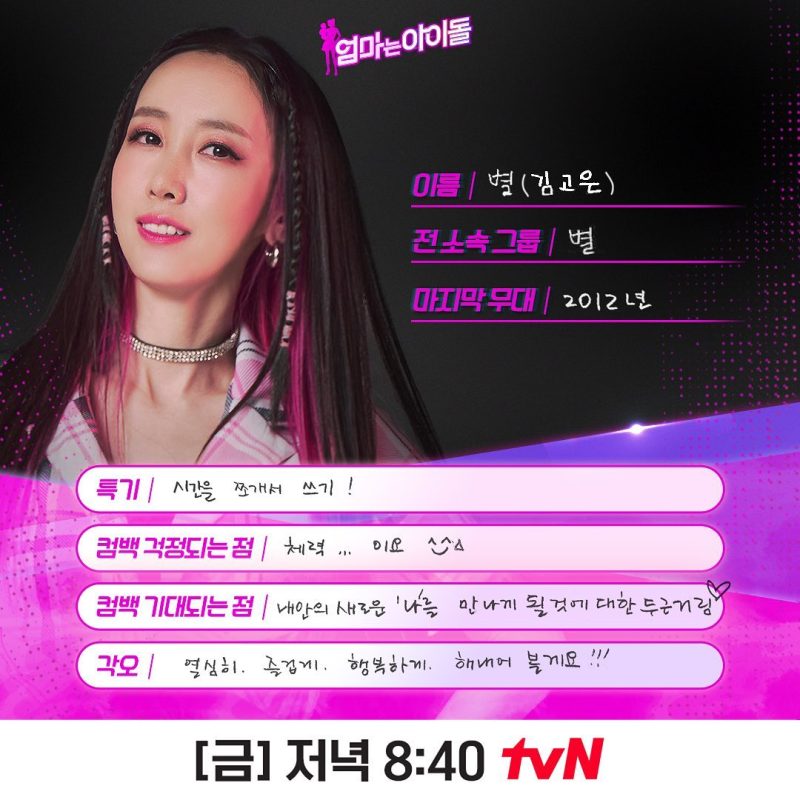 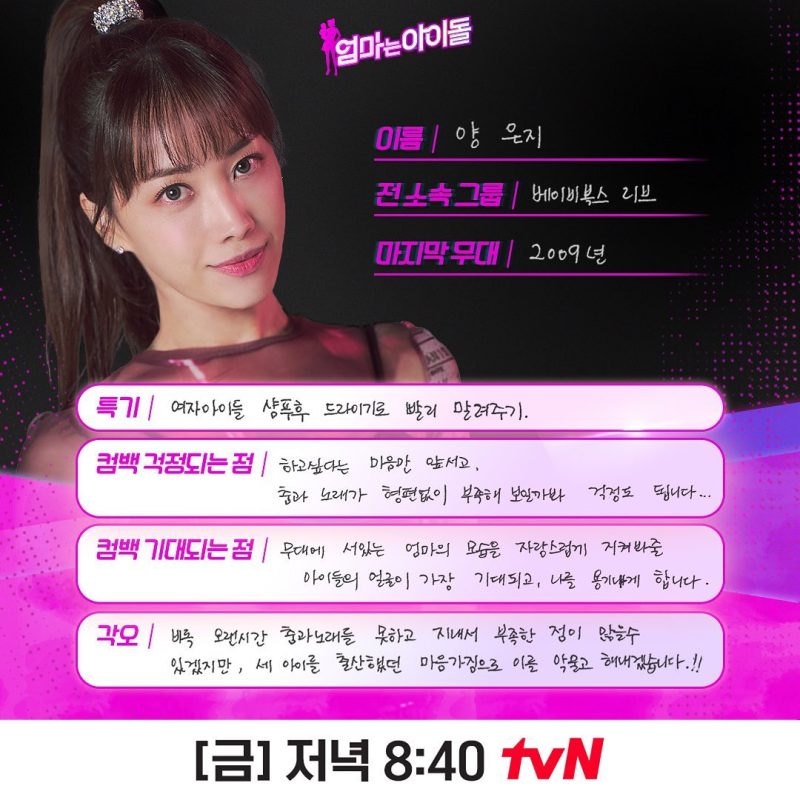 Eunji Facts:
– She was born in Mokpo, Jeollanamdo, South Korea.
– She is a former member of Baby V.O.X Re.V.
– She is a former member of the group Genie.
– In 2009 she married football player Lee Ho.
– She has 3 children: Lee Jia, Lee Jiyul and Lee Jieum.
– Her elder sister is actress Yang Mi Ra.
– Education: Incheon Creative Living High School, Dong-A University of Broadcasting and (majored in Practical Music).
– Her hobbies are listening music, watching movies and reading magazines.
– She loves any food with chicken.
– She loves Swimming, playing the piano.
– Her favorite music styles are ballads, R&B, jazz, pop.
– Her favorite artist is Beyoncé.
– Her nickname is YangYang (양양).
– She is Protestant. 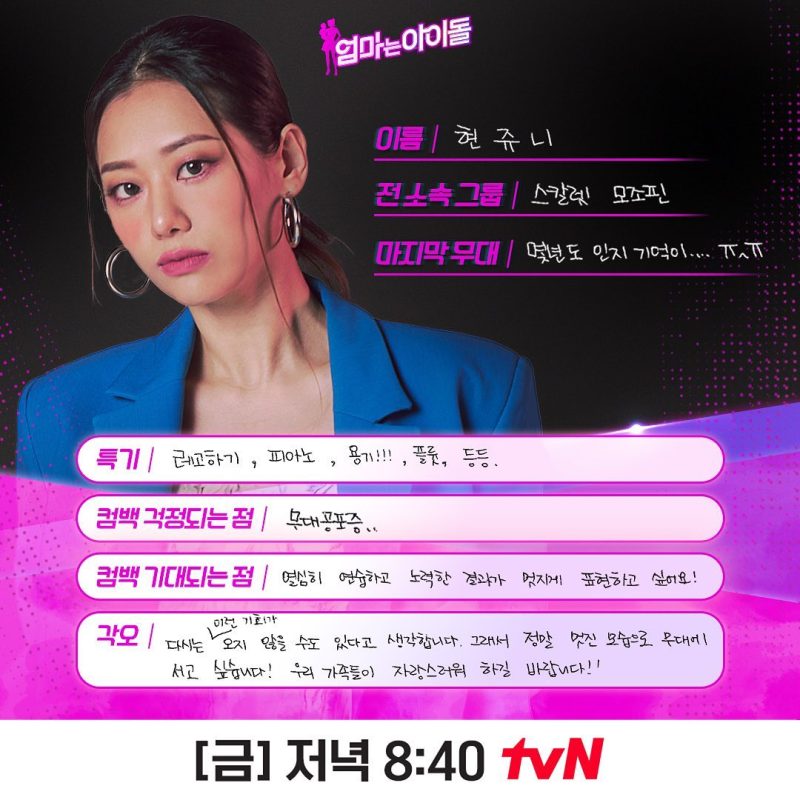 Jyuni Facts:
– She is also known as Juni and Juan.
– She was born in Seoul, South Korea.
– She married an entrepreneur on December 13, 2012
– She has one son.
– She made her acting debut in Beethoven Virus (2008) and stage debut in the musical Bandits (2008).
– She is a member of the duo Scarlet Mojo-Pin and an actress.
– She is a former member of BellaMafia and Seoul Youth Chamber Orchestra.
– She is under Alien Company.
– Education: Kwangshin High School, Seoul Arts College (majored in Music).
– She has a younger sister.
– Awards: 5th Asian Model Awards Ceremony Model Special Award New Star Award (2010). 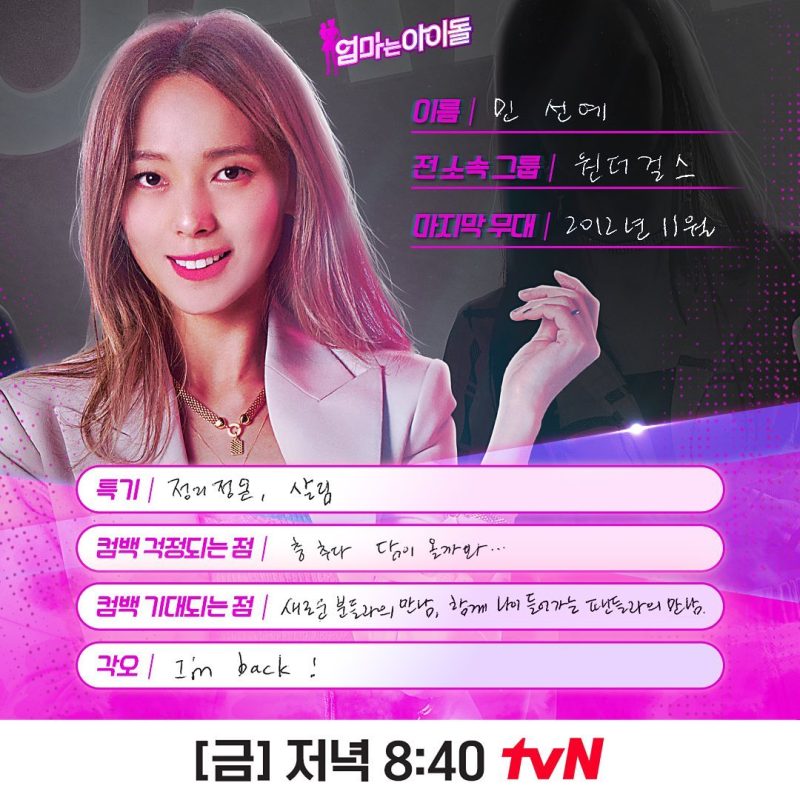 Sunye facts:
– She was born in Seoul, South Korea.
– She is a former member of Wonder Girls (2007-2015).
– She has a Korean-American husband named James Park which she met on a missionary trip to Haiti. They got married on January 26, 2013.
– She has 3 daughters: Eunyoo (Hailey), Hajin (Elisha), Yoojin (Madison).
– Education: Myeonmok Elementary School, Songgok Girls’ Middle School, Korea Arts High School, Dongguk University (majored in Theatre).
– She was raised by her grandparents because her mother died when she was very young and her father suffered from a health condition.
– Her favorite color is blue.
– She is one of JYP Entertainment‘s longest serving trainees along with Jo Kwon from 2AM.
– 2AM‘s Jo kwon is her best friend.
– She is protestant.

Do you like Mamadol (M.M.D)? Do you know more facts about them? Feel free to comment down below. 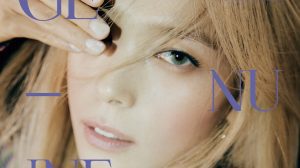 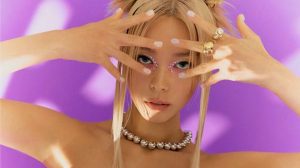 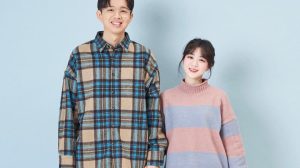