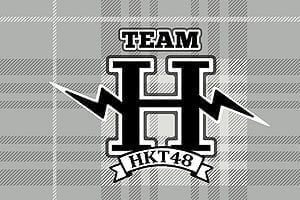 HKT48 Team H is the first team of HKT48, the fourth sister group of AKB48 which performs in Hakata, Fukuoka, Japan. They currently have thirteen members and are under EMI Records. 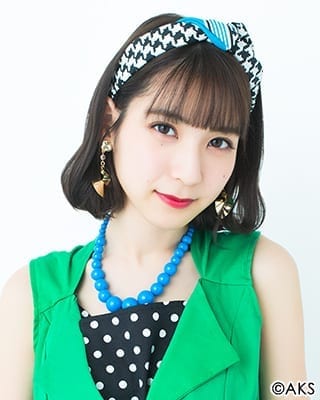 Matsuoka Natsumi Facts:
-She joined HKT48 as a Kenkyuusei in July 2011, then was promoted to a Team H member in March 2012.
-She was Team H’s vice-captain from January 2014 to July 2016. On July 11, 2016, the former captain Anai Chihiro graduated and chose Natsu as the new captain.
-She was a member of Melonpan Alliance, an unofficial group of members who like Melonpan (a type of sweet bread).
-She competed on Produce48 (ranked 67th).
-Her highest Senbatsu ranking is #46 (8th Senbatsu).
-She has a sister who is four years older than her.
-She is easily charmed by cute girls.
-Her favorite foods are hamburgers and chocolate.
-Her hobby is eating sweets.
-She can be moody, but recently said she is starting to have a brighter outlook on things.
-Her charm point is her eyelashes.
-Her favorite color is yellow.
-She is very affectionate with the younger members of Team H.
-Her ambition is to be an actress.
-She is best friends with Motomura Aoi and Matsuoka Hana. Their friend group is called “Team Kihen”.
Natsu’s catchphrase: Hormone (Meat Dish) (I want to eat it!) I love Hormone. Born Heisei 8, August 8th, born on all the 8’s, I’m Matsuoka Natsumi, also known as Natsu, I’m 22 years old, from the Fukuoka Prefecture. 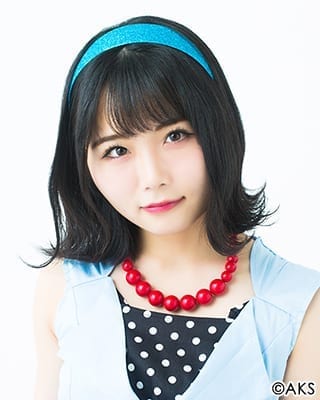 Akiyoshi Yuka Facts:
-She joined HKT48 as a Kenkyuusei in September 2012, and was promoted to Team H in January 2014.
-Her highest Senbatsu ranking is 72nd (8th Senbatsu).
-She really loves mandarin oranges.
-There is a running joke that her face looks like an onigiri.
-Her hobbies are making mandarin art, studying languages, calligraphy, going to hot springs, and games.
-Her skills are neck hula hooping and English pronunciation.
-She is left handed.
-Her charm point is her eyes and bottom eyelashes.
-She has a dry sense of humor.
Yukachan’s catchphrase: I’m Akiyoshi Yuka, also known as Yukachan, 17 years old, Elementary school 6th year student and I love oranges. 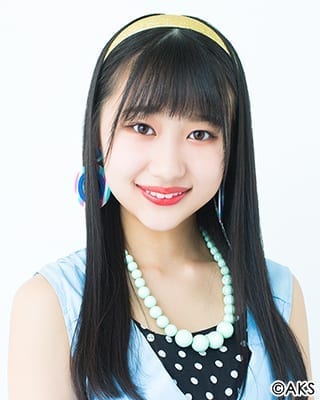 Ito Yueru Facts:
-She joined the AKB48 draft pool and was drafted into HKT48 in early 2018. She was promoted in November 2018.
-Her hobbies are watching DVDs.
-She gets close with people easily.
-She is bad at self-appeal.
-Her special skill is spinning. 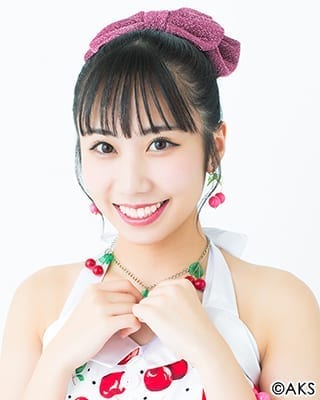 Ueno Haruka Facts:
-She joined HKT48 as a Kenkyuusei in September 2012 and was promoted to Team H in March 2014.
-She is known for making a social media post about group unity during a time when fans were wondering about a clique within HKT48.
-Her hobbies are collecting pink things, working with pearls, and going to yakiniku (barbecue).
-A running joke at the theater is that her knee-highs never stay up onstage.
-She is known as HKT48’s “Goddess of the Theatre” because she sometimes has the most performances in a year, sometimes learns new stage positions just for fun, and always stresses the importance of the theater. She even received a trophy for her 500th stage performance.
-Her special skills are dance, playing the clarinet, and tennis.
-Her charm point is her eye bags and her stretchy cheeks.
Harutan’s catchphrase: Whenever and wherever, everyone’s season is? Haruka! I’m 18-year old Ueno Haruka, also known as Harutan. 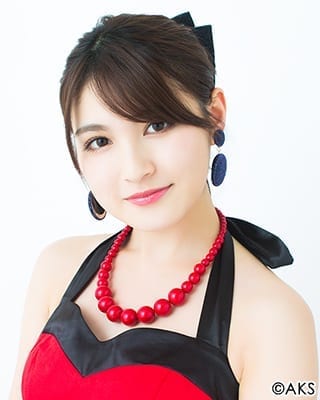 Kojina Yui Facts:
-She joined HKT48 as a Kenkyuusei in September 2012 and was promoted to Team H in January 2014.
-She is in the subunit “Blueberry Pie”.
-Her hobbies are searching for melonpan, collecting stuffed bears, and admiring herself in the mirror.
-She is known for talking in an exaggerated, fake-sounding Hakata accent.
-She makes a Google+ post at 5:55 each day, and also has started doing a live broadcast at the same time called “Go-go-go Jina Broadcast”.
-Her highest Senbatsu ranking is 46th (7th Senbatsu).
-Her charm points are her long black hair and her eyes.
-She has a younger sister.
-She admires team KII member Moriyasu Madoka.
-Her special skills are rolling a hula hoop and posing.
-She can play the piano.
Jiina’s catchphrase: Placing your heart under construction, meeting everyone today makes me Ure– [Fans shout: Jiina!]. From Fukuoka prefecture, 20-year old highschool sophomore, I’m eyeing to be in a shampoo CM one day. I’m Jiina, also know as Kojina Yui, bloodtype AB! 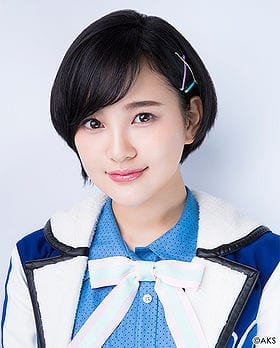 Kodama Haruka Facts:
-She is currently on hiatus.
-She joined HKT48 as a Kenkyuusei in July 2011, and was promoted to Team H in March 2012.
-She had former concurrencies with AKB48’s Team A and Team K.
-Her highest Senbatsu ranking is 9th (8th Senbatsu).
-She was HKT48’s first center and ace.
-She is close with Miyawaki Sakura and former member Anai Chihiro.
-The members call her “Pipi-chan”.
-She can play piano.
-She has bad eyesight and wears contacts.
-Her charm point is her short hair.
Haruppi’s catchphrase: Today’s mood is happy, happy. Everyday happy, Hakata’s fairy Haruppi aka Kodama Haruka. 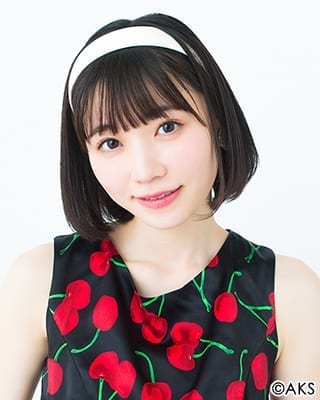 Komada Hiroka Facts:
-She joined HKT48 as a Kenkyuusei in September 2012 and was promoted to Team H in January 2014.
-Her special skill is drawing in an anime style.
-She is part of the “Blueberry Pie” subunit.
-Her charm point is her pointed teeth.
-She is close with Sakaguchi Riko, Tomiyoshi Asuka, Goto Izumi, and Tani Marika.
-Her highest Senbatsu ranking is 60th (8th Senbatsu).
Piichan’s catchphrase: From Miyazaki Prefecture, I am 21-years old, first year high school student who wants to be loved more than mangoes Piichan Komada. 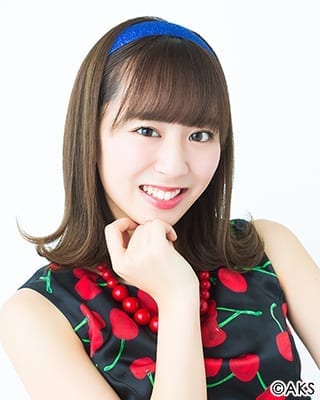 Sakaguchi Riko Facts:
-She joined HKT48 as a Kenkyuusei in September 2012 and was promoted to Team H in January 2014.
-Her hobby is people-watching.
-She has a dog.
-Her special skill is impressions.
-Her charm point is her amiability.
-She is a member of the subunit “Blueberry Pie”.
-She is close with Goto Izumi, Tomiyoshi Asuka, Komada Hiroka, and Tani Marika.
-Her highest Senbatsu ranking is 37th (7th Senbatsu).
Rikopi’s catchphrase: Born in Fukuoka Prefecture, I am third-year high school student, 24 years old Rikopiko Sakaguchi Riko. 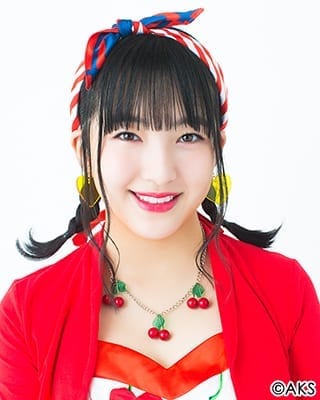 Tashima Meru Facts:
-She joined HT48 as a Kenkyuusei in September 2012 and was promoted to Team H in January 2014.
-Her hobby is reading.
-Her special skill is getting along with everyone.
-She auditioned for the tenth generation of Morning Musume and is close to its member Sato Masaki.
-She read about 20 books a month when she was in primary school.
-Her charm point is her straight teeth.
-She gets upset when members skip meals.
-She has a younger brother.
-Her mother named her after the French word for sea (mer). It’s so she can have a heart as big as the sea.
-She was named the ace of HKT48’s second generation.
-She is a member of the subunit Tentoumu Chu.
-Her highest Senbatsu ranking is 26th (10th Senbatsu).
-She loves Disney.
-She is good at academics but has the worst handwriting in HKKT48.
Meru’s catchphrase: I’m 18 years old, from the Fukuoka Prefecture, even though I’m a Hakata child born in 2000, I can’t suck ramen, I’m Tashima Meru, also known as Meru. 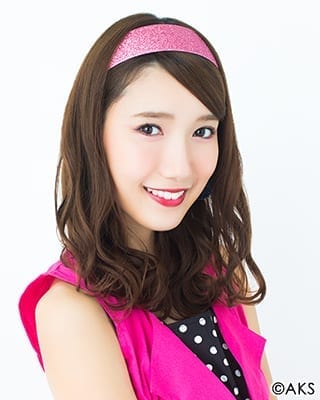 Tanaka Natsumi Facts:
-She joined HKT48 as a Kenkyuusei in July 2011 and was promoted to Team H in March 2012.
-She had a concurred position with SKE48’s Team S from 2014 to 2015.
-Her highest Senbatsu ranking is 50th (9th Senbatsu).
-She is close with Ota Aika and Kumazawa Serina and will have sleepovers at their houses sometimes. She is also close with SKE48 members Deguchi Aki and Goto Risako.
-Her ambition is to be a TV personality.
-Her oshimen (bias) in the 48groups is Miyazawa Sae.
-She is the tallest member in all of Japan’s 48groups at 171cm.
-She likes to have parties and describes herself as the “life of the party”.
-Her charm point is her legs.
-She likes Dragon Ball Z and Monsters, Inc.
-She likes to read erotic manga, but because she’s young she asks her older friends to buy them for her.
-Her lightstick/penlight colors are purple and orange. In SKE48, each member has their own color combination, and her fans continue to use purple and orange even after her concurrency ended.
-She has a pet turtle.
Natsumikan’s catchphrase: Born in Fukuoka prefecture, I’m Tanaka Natsumi, also known as Natsumikan. 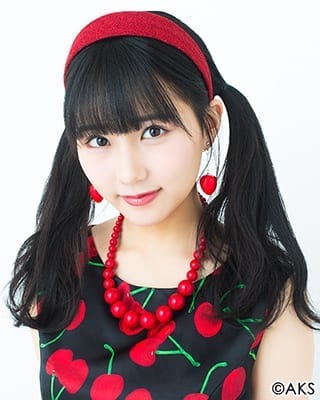 Tanaka Miku Facts:
-She joined HKT48 as a Kenkyuusei in November 2013 and was promoted to Team H in February 2014.
-She is very close with Yabuki Nako and they are called “NakoMiku”.
-Her highest Senbatsu ranking is 10th (10th Senbatsu).
-Her HKT48 oshimen (biases) are Miyawaki Sakura and Moriyasu Madoka.
-She has two dogs named Chris and Eve because she got them on Christmas Eve.
-Her favorite foods are nabe and melonpan and her favorite drink is milk.
-Her favorite colors are blue and pink.
-She was on Produce48 but dropped out of the competition.
-Her favorite subjects are math and drawing.
-She is a Love Berry exclusive model.
-Her charm point is her stretchy cheeks.
-Her skills are teaching her dogs tricks and hula hooping even while moving.
-She is an only child.
-Her hobbies are karaoke and watching movies.
-She doesn’t like haunted houses. 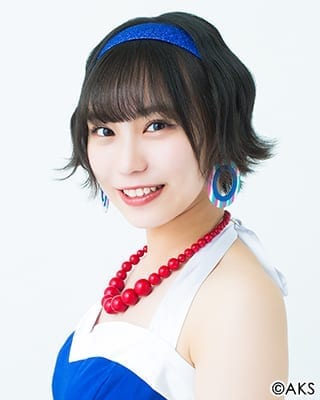 Toyonaga Aki Facts:
-She joined HKT48  as a Kenkyuusei in July 2016 and was promoted to Team H in November 2017.
-Her highest Senbatsu ranking is 79th (9th Senbatsu).
-She has an older sister who is a voice actress.
-She is close to Tsukiashi Amane, Fukagawa Maiko, Takeda Tomoka, and Jitoe Nene.
-Her hobbies are looking at real estate sites and playing soccer.
-She is very motherly to other members of the fourth generation and also to some members of the third generation.
-She has a cat named Jaran.
-Her charm point is her forehead and her triple eyelids.
-Before joining HKT48 she was a finalist in a talent show called The Last Heroine.
–Her favorite colors are yellow, orange, pink, and purple. 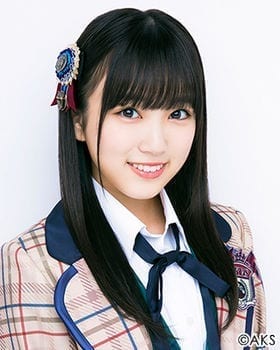 Yabuki Nako Facts:
-She joined HKT48 as a Kenkyuusei in November 2013 and was promoted to Team H in February 2014.
-She formerly had a concurrent position with AKB48’s Team B from March 2015 to December 2017.
-Sashihara Rino told her to audition for HKT48 at a handshake event. Nako is a huge fan of Sasshii and wants to drink alcohol with her when she’s a legal adult, and even claims she was Sasshii’s cat in a previous life.
-She is close with Tanaka Miku, they are called “NakoMiku”.
-She was on Produce48 (ranked 6th) and will promote as a member of IZ*ONE.
-Her highest Senbatsu ranking is 9th (10th Senbatsu).
-She is the ace of HKT48’s third generation.
-She has an older and younger sister.
-Her hobbies are watching movies alone and doing karaoke.
-She has a parakeet.
-She is afraid of heights.
-Her favorite foods are Choco Pie and caramel pudding.
-Her charm point is her dimples.
-She is afraid of heights.
-Her special skill is braiding very fast.
-She likes to play card games.
Show more Nako fun facts… 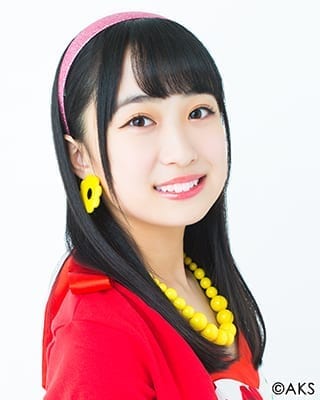 Watanabe Akari Facts:
-She joined the AKB draft and was drafted into HKT48 in early 2018. She was promoted in November 2018.
-Her charm point is her smile.
-She is known for positive thinking.
-She dislikes many kinds of foods.
-Her special talent is handcrafting.
-Her hobby is dancing.
-She admires Yokoyama Yui.

Author’s note: I am new to all48, so if there is any way I can improve the format of this profile (for example the member order, adding graduated members, using different statistics, etc) please let me know!

Who is your HKT48 Team H bias/oshimen? Do you know more facts about them? Feel free to comment below 🙂 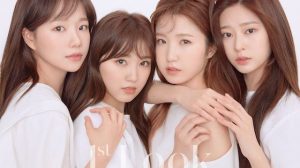 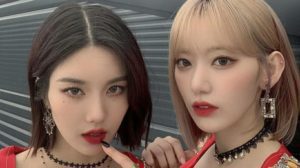 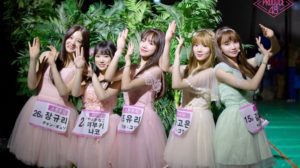