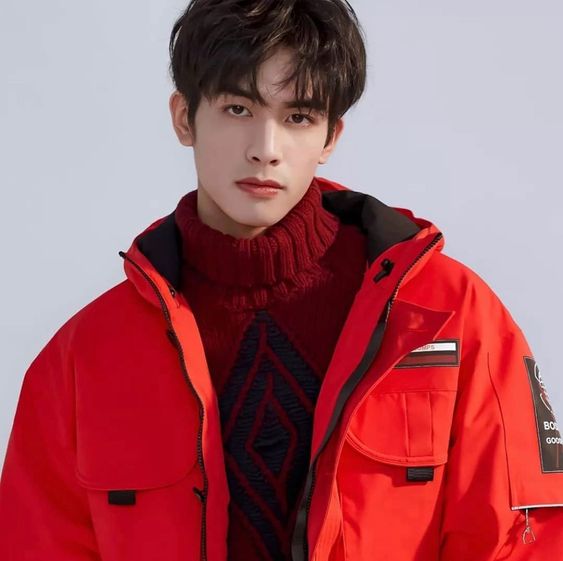 Song WeiLong (宋威龙) is a Chinese actor and model under (Yu Zheng Studio) Huanyu Film. On October 2015 he debuted as an actor in his first drama, “Demon Girl II”, as support role.

Song Weilong Facts:
– Born in Liaoning Province, Dalian, China.
– Education: Tagou Martial Arts School.
– In October 2015, Song Weilong signed with Yu Zheng Studio and officially became an actor.
– He is an actor, model.
– In 2020, Song Weilong plays the lead Actor Role for Yuan Song, “The next stop is happiness”.
– When He was 9 years old, he watched the movie “Legend of Shaolin Temple” so he had the idea of ​​going to Shaolin Temple to learn martial arts.
– When he was young dreaming of becoming a martial arts star like Jackie Chan and Wu Jing.
– When he was in middle school, he uploaded his own video on online video platforms such as Kuaishou.
– The brand of a magnum is also endorsed by WeiLong in 2020.
He also endorses well-known Brands such as magnum, safeguard, silk Yun, yogurt, etc.
– He served as the green ambassador of Green Chengdu Station, for environmental protection, In March 2016.
– He became an advertising model at the age of 16.
– He wanted to become a martial arts star.
– He likes to sing and dance.
– He said “At school, I didn’t know how to fight at that time.”
– There was a scar on his left face because during his school days he was being bullied by someone because of his fair-skin.
– He left his home at the age of 9.
– He has a scar on his head because he was bullied by his schoolmates.
– He made his first appearance in the variety show Run for Time, and also joined the talk show, Day Day Up.
– In 2016, he starred in his first drama, Demon Girl II.
– One of the reasons he wanted to become a martial artist at a young age is that he wanted to learn how to fight and defend himself.
– During his training days at Shaolin temple, his mother worried that what if he can’t keep up his cultural classes, so she took him back.
– On Weibo He was also been called by names such as “long-legged old man”: “long-legged” because of his young age experience, and “old man” because in Song Weilong’s view, he is more mature than his peers in both appearance and psychology.
– Song Weilong’s well known for his legendary life experience which is far more than his peers.
– The experience of leaving parents before the age of ten had lefts the maturity of his character and his appearance.
– Due to his mature character, he was being called old-man.
– He is a kind of man who has a shy personality and felt embarrassed about any and every little thing.
– Once has was been asked by a girl for his QQ number regards to his handsome face but he said “I didn’t”. He was a little embarrassed when it came to these.
– During his Martial arts practicing days he once got seriously injured and was admitted to hospital.
– He said even after such difficult days, He didn’t want to give up because of these pains but remembering his original attachment.
– Song weilong said he is so self-willed and giving up is not his type.
– He received award “Best Awards the Newcomer in 2017”.
– He likes to play basketball and play games privately.
– Reading novels, fantasy martial arts novels,reading books are one of Song Weilong’s hobbies.
– He said “personally I don’t like selfies “, but on Weibo I will post for benefits.
– At his first pay he Bought necklaces and bracelets for his mother, clothes for his father, and clothes for himself.
– He likes all kinds of clothes, mainly clean and tidy.
– He wants to be responsible and the one who take care of his family.
– His Favorite Colors Are White and Light Colors.
– Song Weilong was selected to the 2019 Forbes China Under 30 Elite List, On October 17, 2019..
– He recieve Most Popular Media Actor Award.
– He learned martial arts from an early age and has good martial arts skills.
– His favorite food is tofu.
– He is friend with Yiqin, exo sehun, junjie, Xiaolin and etc.
– He has two older sisters.
– He recieve one gold and two silver medals in wushu.
– His childhood dream was to go to Africa and see the animals.
– He was part of Day Day brother with Yibo, Riley Wang, Neo Hua, etc.
– In 2016, he filmed the movie “CATMAN” with EXO Sehun.
– In 2020 it was confirmed that he was cast of drama In A Class of Her Own along side with Ju JingYi And Bi Wenjun of Next.
– He is not easy to get close with.
– He said about his first impression that I don’t like to talk. I might be more open with people I know well.
– He is very straight-forward person and talk to the point.
– He said I don’t really like putting products on my face.
– He got being frequently mistaken for someone else at the airport.
– Song WeiLong’s Ideal Type: Tall and slim girls.

Do you like Song WeiLong?
Total Votes: 2584
×
You or your IP had already vote.

Which is your Song WeiLong favorite role? Do you know more facts about him? Feel free to comment below. It can help new fans find more info about him. 🙂