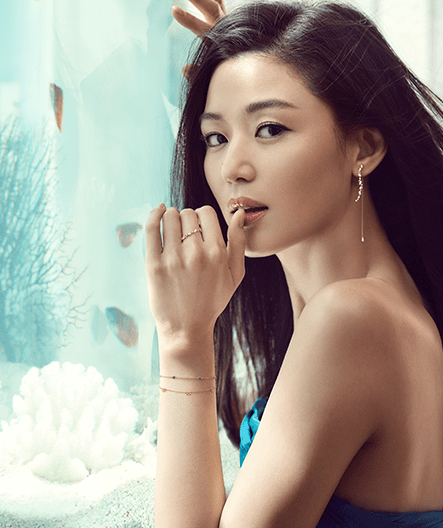 Jun Ji Hyun Facts:
– She was born in Seoul, South Korea.
– She has a brother.
– Her favorite color is white.
– She is a Buddhist.
– Her nicknames are Gianna, Queen Ji Hyun, CF Queen, Food Girl
– Education: Unbuk Elementary School, Unju Middle School, Dongguk University (Mass Communication & Performance)
– When she was a child it was her dream to become a flight attendant, but at the age of 16, she was discovered by a fashion editor.
– She began her career as a model for “Ecole Magazine” in 1997 as Jun Ji Hyun.
– Jun Ji Hyun’s success skyrocketed in the year 2001 when she starred in “My Sassy Girl”, which was based on a popular internet serial “Yupki Girl”.
– She married Korean businessman Choi Joon Hyuk on April 13, 2012. Their wedding took place at The Shilla Hotel in Jangchung-dong, Seoul, South Korea.
– Her husband is the grandson of a famous hanbok designer Lee Young Hee and the son of fashion designer Lee Jung Woo..
– Jun Ji Hyun was pregnant when she filmed the movie “Assassination”.
– After “The Thieves”, “Assassination” is her 2nd movie which brought over 10 million viewers.
– She became one of the best paid South Korean actresses, with about 100 million won (approx. 83,500 USD) pay per episode.
– She gave birth to her first child, a boy, on February 10th, 2016.
– In June 2017, it was announced that Jun Ji Hyun is pregnant with her second child.
– Jun Ji-Hyun’s ideal type: “I think love should be based on feeling. As long as the feeling is right, I’ll go with it regardless of the guy’s traits or qualities.”

(Special thanks to: CHH)

(This profile will officially be updated by kdramajunkiee)

Which of the following Jun Ji-Hyun's roles is your favorite?
Total Votes: 7047
Voters: 5405
×
You or your IP had already vote.

Do you like Jun Ji Hyun? Do you know more facts about her? Feel free to comment below.