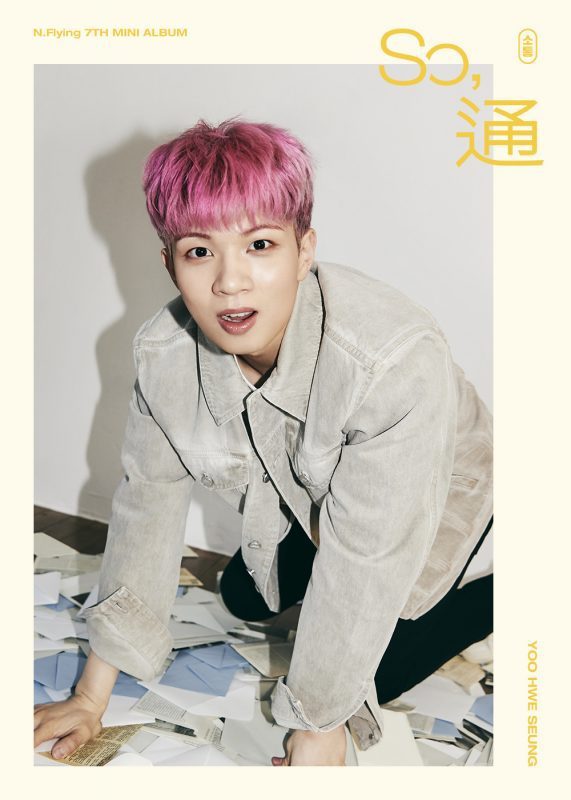 Hweseung Facts:
– He was introduced as a new member of N.Flying on June 19, 2017, and made his debut on August 2, 2017.
– Hometown: Namyangju-si (a city in Gyeonggi Province), South Korea.
– Family: Father (Yoo Dongkyu), Mother (Lee Jinmoon), 3 older sisters.
– He has completed his military service. (Seoul Discovery Hongdae Tour with N’Flying)
– He enlisted on 1st July 2014 and was discharged on 31st March 2016.
– His MBTI is ENFJ-A.
– Education: Seoul Kindergarten, Janghyeon Elementary School, Jinjeop Middle School, Jingeon High School (Graduated)
– He attended school with 94′ liners instead of 95′ because he was born in the earlier part of the year.
– Hweseung is a science major (Weekly Idol ep. 344 N.Flying, Day6).
– He can play the piano and the guitar (170705 TENASIA).
– Hweseung joined FNC in October 2016 (170705 TENASIA), and participated in Produce 101 Season 2 as a trainee under the agency.
– He was eliminated when the top 35 was announced (Ranked 39).
– His favorite season is winter.
– He sang “No Matter Where” by M.C. The Max and “Smoking or Drinking” by Kim Bumsoo when he auditioned for FNC (170705 TENASIA).
– Hweseung trained for only 8 months before he joined Produce 101.
– He collaborated with FT Island’s Lee Hong Gi for the song “Still Love You” which was released on 4/8/18
– Hobbies: Billiards, ski, sports.
– Hweseung recorded an OST for 크리미널 마인드 (Criminal Minds)
– He was a huge fan of AOA in his army days and he even put up a photo of AOA on his locker (TMI News).
– Favorite film genre: Fantasy, horror, romance, action
– When asked what kind of band they want to be remembered as, Hweseung answered, “A band that makes people exclaim, ‘Wow~’” (Soompi: N.Flying Talks About Their Family-Like Bond And What Kind Of Band They Want To Be Remembered As)
– He appeared on “King of Masked Singer” (Episode 147-148).
– His parents were against his debut at first.
– He worked part-time at a supermarket and a clothing store before he joined FNC (170708 Xports News).
– He has impressive vocal abilities and a fun personality.
– Produce 101 fans know him as a bright, funny, and positive guy.
– Hweseung and Jaehyun are friends with Sonamoo’s Euijin and CLC’s Seungyeon.
– He received the title “2019’s Super Rookie” from Immortal Songs.
– His parents run a karaoke business (170705 TENASIA).
– He also recorded the song “If You Were Me (니가 나라면)” with AOA’s Jimin and Yuna for “A Korean Odyssey (화유기)”.
– He was the maknae for only 3 years, before Dong Sung joined the band in 2020.
– His grandfather was the one who named him.

Do you like Hweseung?
Total Votes: 417
×
You or your IP had already vote.