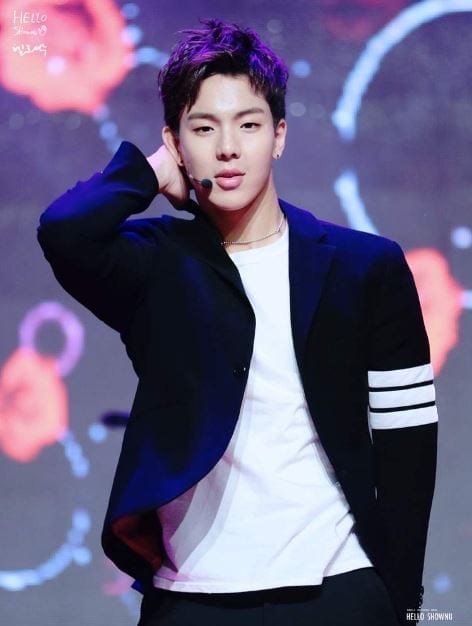 Shownu facts:
– He was the 2nd trainee announced as a member of Monsta X (after survival TV show “No Mercy”).
– He was born in Changdong, Donbonggu, Seoul, South Korea.
– Family: father, mother
– He was a former JYP Entertainment’s trainee with GOT7, but left due to training absences.
– He was a JYP trainee for about 2 years.
– He’s still friends with GOT7.
– Rain was the one who inspired him to follow a music career.
– He won the 2nd place in a JYP audition and was named “the second Rain” because of his dancing and singing skills.
– Before joining Starship he was a back-up dancer for Lee Hyori and performed with her during promotions/concerts (“Bad Girls,” “Going Crazy” “U-Go-Girl”)
– He also appeared in Lee Hyori’s “Bad Girls” MV and “Going Crazy” MV.
– He said he enjoyed being a back-up dancer and he would’t have minded to remain a back-up dancer for the rest of his life, but a friend of him told him about Starship Entertainment, so he gave it a shot and passed the audition.
– He is a former member of Starship’s NUBOYZ.
– He is close to Soyou (SISTAR).
– When asked with which female artist he would like to collaborate in the future, he named Soyou.
– He can move things and pick things up with his toes. When he is lying down on his bed, he usually has a lot of things on the bed, near his feet, so he picks things up with his toes.
– He sleeps wearing only shorts.
– Only Shownu and Kihyun are super confident with their looks, the rest of the members consider themselves “ok”.
– In his opinion, his best feature are his arms. (When he goes to the gym he especially works on his arms).
– He participates in creating most of Monsta X’s choreographies.
– He is the most hardworking member.
– If he had to describe himself in one word, it would be “cow”
– He prefers beef over pork
– His favorite member is Jooheon
– He’s good at swimming
– He said there are no sports he’s good at besides swimming
– A food he wants to eat even after he just ate it is cereal (he loves cereal, a lot)
– He can eat 3 servings of ramen with 2 servings of rice
– He said Minhyuk is the hardest member to control, he’s hardest to control ’cause he’s very loud sometimes
– He likes MInhyuk the most when he does variety shows (’cause he makes it fun)
– If he gets a son, he wants to name him Jang Gun (Son Janggun/손장군). Jang Gun means “general” in Korean.
– If he gets a daughter, he wants to name her Jang Mi (Son Jangmi/손장미). Jang Mi means “rose” in Korean.
– He starred in “Lipstick Prince” a Korean show that premiered on December 1, 2016 (alongside with other Kpop idols).
– He appeared in D-Unit’s music video “Talk to My Face” when he was still a trainee (in late 2013).
– Shownu and Wonho were both in the “Shake It” MV by SISTAR.
– He appeared in BESTie “Pitapat” MV.
– Shownu was on “Cool Kiz on the Block” (ep. 113-114), “Hit the Stage” (ep. 1-2, 5-8, & 10), “Video Star” (ep. 73), “Law of the Jungle” (ep. 216-219), “King of Masked Singer” (ep. 137), “Running Man” (ep. 307, 319), “Lipstick Prince” (Season 1 and 2), “Weekly Idol – Idols are the Best” (ep. 279 with Jooheon), “Weekly Idol – Masked Idol” (ep. 291-292), “Oh! Cool Guys” (ep. 1-4, 7-9, and 13-15),”Master Key” (ep.2), “Hello Counselor” (ep. 385 with Kihyun), “Knowing Brothers” (ep.136).
– He starred in “High-end Crush” (2015), “Dae Jang Geum is Watching” (ep. 9-10)
– He sang “Now I Know” for “Protect the Boss” OST Part 6, in 2011.
– He shot a solo commercial with DIA’s Yebin and split his pay with the other members.
– He doesn’t know how to do aegyo.
– The rest of the members like teasing him.
– He admitted Minhyuk is a natural born leader.
– Shownu’s nicknames are Showtle (because he’s a very good swimmer) and Robot Shownu (because he is awkward when having a conversations with others).
– He said he is awkward when having a conversation with others since once he starts talking the mood goes down, and the people stop talking, thus, he doesn’t speak much.
– During the fan meets, fans got used with his short answers (“yes”, “no”), so instead of asking him lots of questions many times they just ask for a photo with him instead.
– In the old dorm he shared a room with Hyungwon and Wonho.
– Update: In the new dorm, he shares a room with Hyungwon and Jooheon.
– He plays games on his iPad every night before going to bed.
– He likes to exercise.
– His favorite food is meat.
– His favorite color is black.
– Hobbies: listening to music.
– He’s humble and never introduces himself as “Monsta X leader”.
– During (170421 KBSWORLD K-Rush FB Live) he said if he were a girl he would date Hyungwon.
– Shownu said he doesn’t mind dating an older women as long as she’s still younger than his mom.
– Shownu’s ideal type is a pure woman like the actress Gong Hyojin.