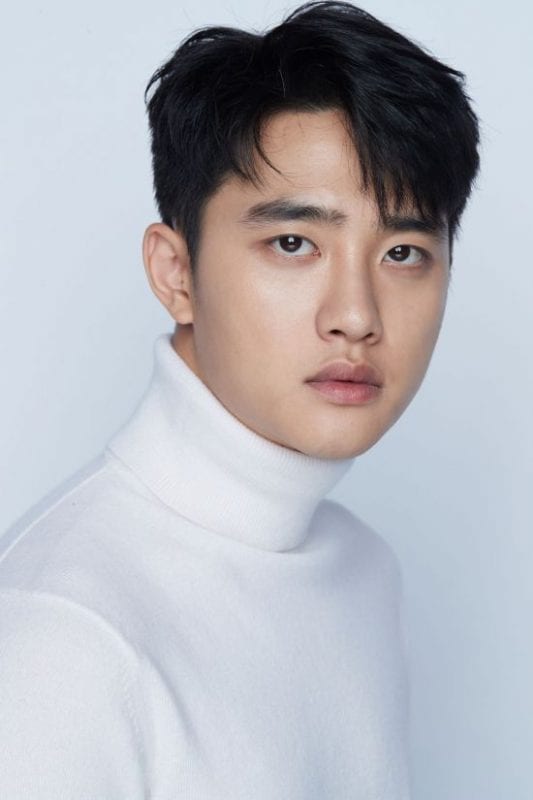 D.O facts:
– He was born in Goyang, Gyeonggi Province, South Korea.
– Family: Father, mother, older brother
– Education: Baekseok High School
– He was a kid ulzzang.
– He officially joined SM Entertainment in 2010 after winning a singing competition.
– His parents were very supportive of him becoming a singer.
– He says that he inherited his artistic side from his father because his father owns an art business.
– His nicknames are: Heenjabuja (rich in whites), Umma, Orchestra boy, The pop out eyes, Pororo (He stated once that Pororo resembles him a lot.)
– Personality: Quiet, acts like a mother to the other members, sentimental, considerate
– He has heart shaped lips and round eyes.
– He is like the mother of the group. He always does the cooking and looks after the other members.
– If the EXO dorms are messy, D.O will nag the other members.
– He’s very shy with strangers. He prefers it if other people initiate conversations and gets close to him.
– If D.O is in the company of only EXO members, he will joke around a lot.
– When he gets nervous, he forgets things easily.
– He has the habit of biting his nails.
– D.O can speak basic English.
– He is close with Kai.
– He doesn’t call Chanyeol “hyung” because Chanyeol told him he wants the two to be close friends.
– He likes singing while Chanyeol plays the guitar.
– Habit: Hums along to songs.
– He can play the piano.
– He loves cooking and mostly cooks for the members.
– He has a habit of humming songs.
– Hobbies: Interpreting lyrics, singing, beatboxing.
– His favorite type of music: Pop.
– His favorite type of movie: Fantasy movies
– His favorite number is 1.
– His favorite color is black.
– His favorite food are Spaghetti.
– D.O has the habit of wetting his lips with his tongue.
– D.O’s favorite song is Travie McCoy’s “Billionaire” ft. Bruno Mars.
– He is obsessed with cleaning. He is always tidy and likes to sort things by color, brands, and type.
– D.O. doesn’t do exercises, because he hates sweating.
– If he didn’t become a singer, he would’ve been a chef.
– He says one of his secrets is that he has a lot of little moles on his body.
– When he can’t sleep, he’ll turn on a movie.
– EDIT: He now shares a room with Chanyeol and Kai (360 Star Show).
– EDIT 2: He’s having his own room now.
– D.O is close friends with BtoB’s Lim Hyunsik.
– D.O is close with Jo Insung and Lee Kwangsoo
– He is a fan of f(x).
– He says that while the EXO members are in the car together, they mainly listen to SHINee’s music the most.
– He respects TVXQ’s Yunho a lot.
– His role model is Yoo Young Jin (composer).
– According to Chanyeol, D.O has bad eyesight. When he doesn’t wear glasses, he glares. (Knowing Bros ep 85)
– He acted in the web drama “EXO Next Door” (2015), “Be Positive” (2016).
– He acted in the Korean movies: “Cart” (2014), “Unforgettable/Pure Love” (2016), “My Annoying Brother” (2016), “Along With the Gods: The Two Worlds” (2017), “Room No.7” (2017), “Swing Kids” (2018)
– He acted in Korean dramas: “To The Beautiful You” (2012, cameo), “It’s Ok, This is Love” (2014), “Hello Monster” (2015- ep. 1-2), “Be Positive” (2016), “100 Days My Prince” (2018)
– D.O has received many awards and praise for his acting in dramas like “It’s Okay, It’s Love” and in movies like “Cart”.
– S.M Ent. confirmed D.O’s enlistment date is July 1st, 2019.
– D.O’s ideal type is a girl who is kind and eats well.

Make sure to read the comments below as they usually provide fun and useful facts, since we can’t possibly add all the additions in the actual post – Many thanks to all those who bring new info about D.O in comments! <3

SM the Performance Profile and Facts