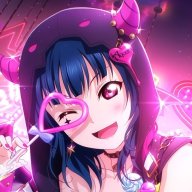 To start off, I'm just going to say THIS WILL CONTAIN SPOILERS. And also, I've yet to watch: Wake Up, Girls!, Love Live! Superstar! and 22/7, although they are on my list lol

Love Live! (2013)
So, "Love Live!" is, without a doubt, probably the biggest idol anime. Basically everyone knows it. And it's so good! If you're looking to get into idol anime, I'd say the "Love Live!" franchise is the best place to start. The first series, Love Live!, follows Honoka Kosaka - a second year student attending Otonokizaka High School. Her school is at a risk of closure, due to a lack of new students enrolling. To try to prevent the school from closing, she starts a school idol girl group (known as µ's/muse). As the first season goes on we see new girls finally joining until they are 9, the 9 girls being Honoka (of course), Kotori Minami, Umi Sonoda, Eli Ayase, Rin Hoshizora, Hanayo Koizumi, Nico Yazawa, Nozomi Tojo and Maki Nishikino, and the series follows their achievements and struggles as a school idol girl group. I'm not gonna continue saying anything else or I'll spoil it all but it's definitely worth a watch and I loved every moment of it, including the movie.

Love Live! Sunshine!! (2015)
"Love Live! Sunshine!!" is the second series in the "Love Live!" franchise. This time, it follows Aqours. Aqours (pronounced as aqua I just found out) is also a school idol girl group originally formed by Kanan Matsuura before falling apart 2 years before it was exceeded by Chika Takami, the main character. Chika is heavily inspired by µ's, and when she finds her school in the same situation as theirs, wants to do the same - form an idol group to save it. The first few episodes of season 1 are the same as "Love Live!" 's - more girls joining until they are 9. Here, the 9 girls are Chika, You Watanabe, Riko Sakurauchi, Kanan Matsuura, Mari Ohara, Ruby Kurosawa, Dia Kurosawa, Hanamura Kunikida and Yoshiko Tsushima. I must say, however, their story doesn't end like muse's does, despite both winning the Love Live...

Ongaku Shoujo/Music Girls (2018)
A more less known one I'd say is Ongaku Shoujo, which follows an 11-member female idol group, who are struggling to make it big and are a C-class girl group. They don't sell many CD copies and aren't very popular, performing at airports and small gigs, yet still try their best. The main character is a 16 year old girl called Hanako Yamadagi who has just flown back to Japan from Germany(?). She claims to love idols and sees Music Girls' producer Ikehashi promoting their airport performance/contest, and so Hanako naturally goes to see what it is. Ikehashi introduces her to the group, claiming he sees something in her. They believe she could be the key to finally getting Ongaku Shoujo popular. She starts off as a staff member, just helping the group out, but later joins the group. Do they succeed? Well, find out for yourself by watching it.

While it did have some stranger parts, overall it was pretty good. Most people said it was horrible, but it wasn't really. I also really like the artstyle, it's so cute!

Garugaku - St Girls Square Academy
Now prepare for this to be a little bit biased as it is about my favourite jpop girl group Girls2. Garugaku follows Toa Harada and her enrolling in the school, having a single goal - to stand on the Girls Arena stage. She encounters 3 teams of girls who also have the same goal: south2, west2 and east2. The school is only open to those who pass the auditions held around the country. The girls in the teams by the way are: (south2) Youka Ogawa, Kurea Masuda, Misaki Tsuruya and Kira Yamaguchi, (east2) Ran Ishii, Yuzuha Oda and later Toa Harada and (west2) Minami Hishida and Momoka Sumitani.

The episodes are short, each being only 2 minutes long, and kinda hard to find. But you can watch most on animix!!

Overall rating: 9/10 - I did say I'd be biased, and also minus points for how short each episode is